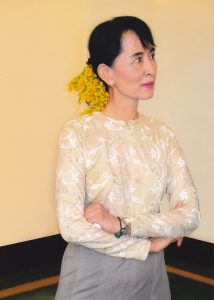 Suu Kyi is also an author, having published Letters from Burma and Freedom from Fear in 1991.

Aung San Suu Kyi was born in a small village outside Yangon on June 19th, 1945. Her parents were politicians and heavily involved in public service. Her father, Aung San, founded the modern Burmese army, fought for Burma’s independence from the British Empire and is known as the Father of modern Myanmar. Khin Kyi, her mother, was the first Minister of Social Welfare of the newly-independent Burmese state and later ambassador to Nepal and India.

During her mother’s tenure as ambassador, Suu Kyi lived in her with New Delhi. She earned three degrees: a degree in Politics, a B.A. in Philosophy, Politics and Economics, and an M.A. in Politics. Thereafter, she lived in New York and worked for three years at the United Nations.

In 1988, she returned to Burma to care for her ailing mother. She became involved with the opposition against military rule in the country and helped form the National League for Democracy (NLD). Inspired by Gandhi, she espoused a non-violent approach in the fight for democracy.

The military junta placed Suu Kyi on house arrest on 20 July 1989; with the military offering her freedom if she were to withdraw from politics and leave the country forever. Suu Kyi refused, choosing to sacrifice her life for her people. Over a 21-year period, she was under house arrest for a total of 15 years. She continued her pro-democracy efforts even while in detention, garnering much international attention and support for the cause of Burmese democracy and freedom.

In November 2010, Suu Kyi was released from house arrest for the final time. With the NLD re-registered as a political party, Aung won a seat in Parliament in April 2012. In 2015, NLD won the majority votes in the general elections and on 6 April 2016, Suu Kyi became State Counsellor (the de facto Prime Minister of the country).

From the beginning of her political career, Suu Kyi was not afraid to stand up for what she believed in and was willing to put herself out there to fight for a higher cause. She spoke up against the military junta and advocated a nonviolent approach in the fight for democracy in Myanmar.

In the face of adversity and self-sacrifice during her house arrest, Suu Kyi remained assertive in her actions and words, and stayed focused on the bigger goal of securing democracy and human rights in Myanmar. She stood by her convictions, and used the power of words even when she had no other resources.

Assertiveness is a mark of an effective leader. Be bold and unafraid to have a big vision, and then be unwavering in your focus to reach that goal. Don’t be swayed by critics or people opposing your views; if you believe in your vision, stay resolute and put in the work to make it come true.

In her fight for democracy in Myanmar, Suu Kyi knew that she couldn’t do it on her own. In addition to building up the NLD, she cultivated relationships with leaders and diplomats all over the world as she knew how powerful those connections could be.

Indeed, having the international community on her side put considerable pressure on the Burmese military junta to end her house arrest and give in to concessions that would make Myanmar more democratic. Even after her release, Suu Kyi has continued to build connections with world leaders as she helps her country transition into democracy.

To be successful as a leader, find your ‘tribe’ — people who have the same beliefs and goals as you. These people may turn out to be more than just professional connections, but personal ones as well. We all need support and encouragement in our lives, especially when we go through tough times, and having a strong network you can rely on can be immensely helpful.

3. Make the most out of a bad situation

Over a period of 21 years, Suu Kyi spent a total of 15 years under house arrest and endured a long separation from her family. The military junta rejected her husband’s appeals for an entry visa and her two sons, who were based in the UK, only managed to visit her in Myanmar in 2011.

Suu Kyi found ways to make her detention a productive time for her. She was not idle; instead she read books, refined her political, philosophical and spiritual stance, and played the piano. Occasionally, she was also allowed visits from foreign diplomats. She did not allow her restricted circumstances to stop her from her goal of a free and open Myanmar.

Throughout her time under house arrest, Suu Kyi made the most out of a bad situation by using her plight to bring international attention and support to what was going on in Myanmar. Pressure from the international community had a huge impact in ending Suu Kyi’s house arrest and putting Myanmar on the path of democracy.

When you’re leading a team or an organization, there will be times when you’re constrained by resources or faced with a difficult situation. Don’t be dragged down when faced with challenges; instead find ways to turn a difficult time into an opportunity and look for creative ways to reach your goals in the face of constraints and limitations. 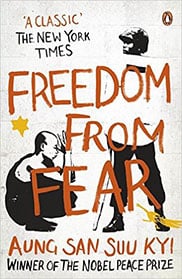 Freedom from Fear: And Other Writings

Read about the greatest hopes and fears of an entire nation, as told through the words of a Nobel Peace prize winner Aung San Suu Kyi. Burma’s “woman of destiny” remains one of the greatest fighters for freedom and democracy to this day. 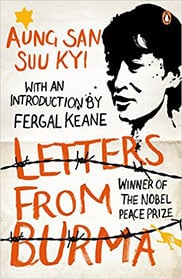 This astonishing collection of letters by Aung San Suu Kyi paints a horrific and heartbreaking picture of the impact political decisions have on the real people. Yet, amidst all the tragedy and hardship, this heroine became a symbol of hope and a leader of democracy. 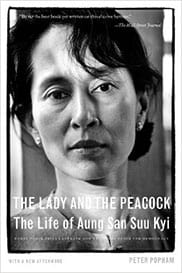 The Lady and the Peacock: The Life of Aung San Suu Kyi

Leader of the largest popular revolt in history of her country, Aung San Suu Kyi has lived a tumultuous life full of profound triumphs and devastating tragedies. Even the peaceful revolutions come with extreme prices to pay, and here is the story of Burma’s “Lady”.

“You should never let your fears prevent you from doing what you know is right.”

“If you want to bring an end to long-standing conflict, you have to be prepared to compromise.”

“We will surely get to our destination if we join hands.”

“I don’t believe in people just hoping. We work for what we want. I always say that one has no right to hope without endeavor, so we work to try and bring about the situation that is necessary for the country, and we are confident that we will get to the negotiation table at one time or another.”

“My top priority is for people to understand that they have the power to change things themselves.”

“Fearlessness may be a gift but perhaps the more precious thing is the courage acquired through endeavor, courage that comes from cultivating the habit of refusing to let fear dictate one’s actions, courage that could be described as ‘grace under pressure’- grace which is renewed repeatedly in the face of harsh, unremitting pressure.”

Listen to Aung San Suu Kyi’s speech at the University of Oxford in 2012 when she accepted her honorary degree: