Colin Powell is an American statesman and a retired four-star general in the United States Army. He was the 65th United States Secretary of State serving under President George W. Bush. He also served as the Chairman of the Joint Chiefs of Staff during the Gulf War. 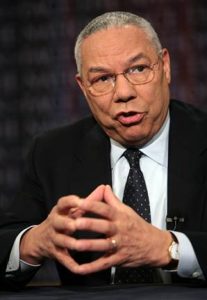 Colin Powell was born in 1937 in New York City. He is the son of two Jamaican parents with Scottish descent as well. While he received his degree from the City college of New York for geology, he was never really a good student, obtaining a C-average.

Colin Powell describes his first entrance into the military, the ROTC, to be the happiest experience of his life. He was a professional soldier for 35 years of his life, with his rank rising all the way to general.

During his military career, he was involved in the Vietnam war as a military adviser in 1962. Much later, he would be involved in the invasion of Grenada in 1983 and the air strike in Libya in 1986.

In April 1989, Powell was promoted to General and briefly served as the Commander in Chief, Forces Command, and later that year, he would be promoted to be the Joint Chief of Staff by George H. W Bush.

In 2000, he would become the 65th Secretary of State for the US as George W Bush won the Presidential Election. As Secretary of State, he would have a huge influence in the Senate with his oratorical skills, notably convincing the invasion of Iraq, which later led to huge controversies and embarrassment.

After his retirement in 2005, he went around the world in various speaking engagements, becoming a speaker at motivational events and a spokesperson for National Mentoring Month, a campaign held each January to recruit volunteer mentors for at-risk youth.

Colin Powell has won countless civilian awards in his life, and a few of his latest honors are:

The people loved Colin Powell as a military leader because they knew of his experiences and honors for bravery in the military. His exploits have earned him the respect of people who would follow him.

The best thing you can do as a leader is to walk the walk; and people trust a man or a woman who has proven and achieved in the arena he/she is leading in.

If you want to become a leader that people follow, you just got to be willing to go the extra mile, fight the battles no one else wants to fight, step out in courage when others are shrinking back. Do that enough and people begin to recognize you as a true leader with experience.

2. Convey a sense of purpose

The one thing that binds men together is the sense of purpose. Organizations are formed with a purpose and they must maintain this sense of purpose through continual and repetitive reminders by the leader.

If a leader stops communicating purpose, it is often because organization has lost its direction and focus and ultimately this will cause followers to leave the organization. And people are forgetful; a leader has to do this again and again so that people’s focus are renewed continually.

Call people to a higher purpose and remind them again and again why they’re there!

3.Give your followers resources

A good leader equips his followers well for the task ahead. He provides the necessary resources like equipment, knowledge, skills and connections so that the followers are able to achieve their goals.

Most people can thrive if a leader creates the environment in work where the gifts and abilities of each individual are maximized and everyone is equipped for what they have to do.

You’re not going to know exactly what everyone needs to do his/her job; this is a process that you go through as a leader through practicing active listening and observation skills.

Don’t bother people for help without first trying to solve the problem yourself.

If you are going to achieve excellence in big things, you develop the habit in little matters. Excellence is not an exception, it is a prevailing attitude.

Perpetual optimism is a force multiplier.

Success is the result of perfection, hard work, learning from failure, loyalty, and persistence.

Get mad, then get over it.

Giving back involves a certain amount of giving up.

Don’t be afraid to challenge the pros, even in their own backyard.

Great leaders are almost always great simplifiers, who can cut through argument, debate and doubt, to offer a solution everybody can understand.

Leadership is solving problems. The day soldiers stop bringing you their problems is the day you have stopped leading them. They have either lost confidence that you can help or concluded you do not care. Either case is a failure of leadership.

Never neglect details. When everyone’s mind is dulled or distracted the leader must be doubly vigilant.

Have fun in your command. Don’t always run at a breakneck pace. Take leave when you’ve earned it, spend time with your families.

Surround yourself with people who take their work seriously, but not themselves, those who work hard and play hard.

The chief condition on which, life, health and vigor depend on, is action. It is by action that an organism develops its faculties, increases its energy, and attains the fulfillment of its destiny.

The healthiest competition occurs when average people win by putting above average effort.

This is Colin Powell speaking about leadership in Sanford Field House to an audience of about 4,500 people.

Wikipedia: A detailed account of Tony Blair’s life
Academy of Achievement: A Biography of Colin Powell