You are at:Home»Leadership»David Beckham Leadership Profile 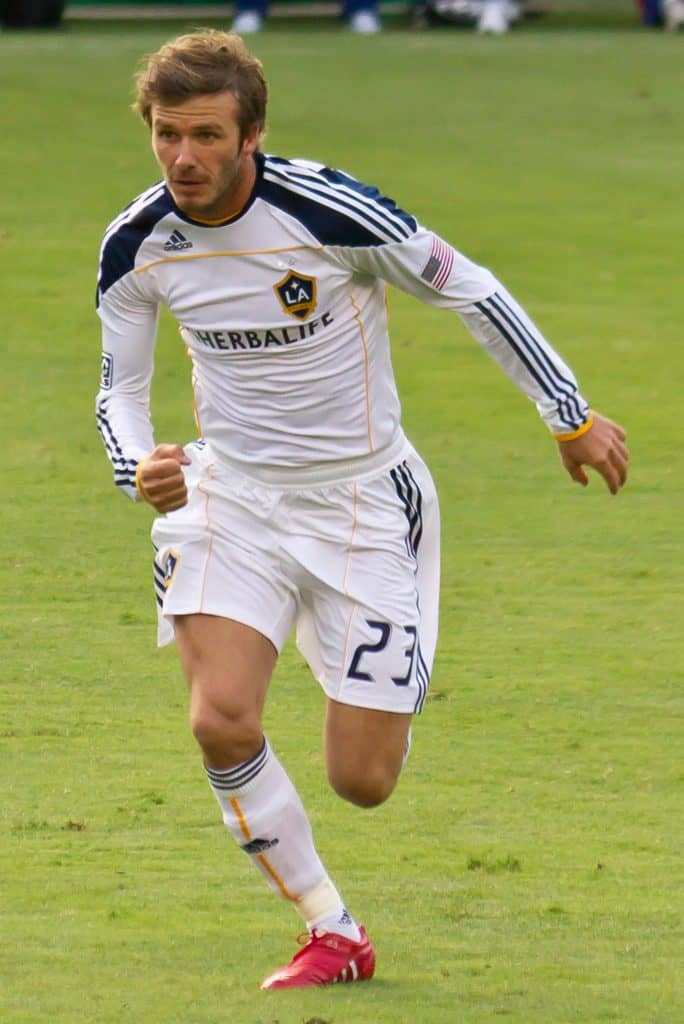 David Beckham is a former professional footballer who played for top clubs such as Manchester United and Real Madrid. He also played on the England national team and was captain from 2000 to 2006. As a midfielder, he was known for his bending right free kicks. During his 20-year career, Beckham won 19 trophies and was awarded an Order of the British Empire (OBE) for services rendered in the sport of football.

David Beckham was born in London to a middle-class British family on May 2nd, 1975. As a child, he wanted to be a professional footballer, and his parents passed on their love of Manchester United to him. Beckham spent his childhood playing football, and his talent caught the eye of Manchester United officials who urged him to try out for their youth team. In 1991, he signed on to their Youth Training Scheme.

Together with some of his peers such as Ryan Giggs, Paul Scholes and Nicky Butt, Beckham came up through the United youth team, and he made his debut as a Manchester United player in 1995. Dubbed the ‘Class of ‘92’, Beckham and his youth teammates went to to form the core of the Treble-winning team (the Premier League title, the FA Cup, and UEFA Champions League) in the 1998-99 season.

Beckham played for United until 2003, despite an increasingly difficult relationship with manager Sir Alex Ferguson (he was concerned that Beckham’s focus wasn’t on the game but on fame and celebrity after he married former Spice Girl, Victoria Adams). In his 12 years with the club, he won six Premier League championships, two FA Cups, one Champions League title and one Intercontinental Cup.

Beckham left United for Real Madrid where he played for 4 years. In his last year with the club, Real won the La Liga title for the first time in 4 years. He moved on to the LA Galaxy in 2007, giving the Major League Football franchise a major boost in the process; the team sold 5,000 season tickets in anticipation of his move.

He stayed with the Galaxy until May 2012; however, he was loaned out to Italian football club AC Milan twice. After the Galaxy, he signed a 5-month deal with French club Paris Saint-Germain (PSG). He donated his entire salary from his time with PSG a local children’s charity.

At the international level, Beckham played for the England team from 1996 to 2009, with a total of 115 appearances including three World Cups and two UEFA European Championships. He was captain for 6 years from 2000 to 2006, and was the first English player to score in 3 separate World Cup tournaments.

Beckham retired from professional football on May 18th 2013, playing his last match as captain for PSG. As PSG had clinched the Ligue 1 title that season, he became the first English player to win league titles in four different countries (England, Spain, United States, and France).

Among the many honors he has received, Beckham was awarded an Order of the British Empire (OBE) in 2003 for services rendered in the sport of football.

1. Bounce back from adversity

With fame comes criticism, and during his career, Beckham endured his fair share of tough times. One of the toughest was the aftermath of the 1998 World Cup, when England was eliminated by Argentina in the second round of competition after losing the penalty shootout. During that match, Beckham was sent off with a red card after he kicked Argentinean player, Diego Simeone, on his calf after the latter had fouled him. English soccer fans and media blamed Beckham for their exit from the World Cup and vilified him.

Beckham’s vilification continued into the 2000 UEFA European Championship; although he helped to set up 2 of the 3 goals in the English win over Portugal, fans jeered and taunted him during the match. Despite the negativity, Beckham kept his head down and continued working on his skills and being the best player he could be. In November 2000, Beckham was promoted to captain of the England team.

The tide turned for Beckham in the 2002 World Cup qualifying match against Greece, a game that England had to win or draw in order to qualify for the World Cup finals. In a game with such high stakes, he led by example as team captain. He covered over 16km during the duration of the game, and his free kick taken in the last minutes of the match dramatically secured England a spot in the World Cup.

Beckham showed strength of character in his ability to bounce back from adversity. He did not allow criticism to derail him; instead, he put time and effort into improving his craft and proved his critics wrong by displaying his leadership qualities and skills as a player. In fact, despite the tough time he faced in his international career after the 1998 World Cup, he won the Treble with the United team in the 1998-1999 season.

When you’re leading a team or organization, there will be times when you’re faced with criticism or difficult situations. The ability to bounce back from tough times is key for any leader — learn to be resilient and stay focused on your goals. If you stay the course and continue working on your vision, your success will ultimately win over your critics.

Each of us has our own strengths; great leaders lean on their strengths and work to make them extraordinary. Although Beckham did have some natural talent for soccer, it was his work ethic and persistence that pushed him from good to great.

He was known for putting in hours and hours of practice (even beyond the team’s official training) to perfect his free kicks and crosses. According to Sir Alex Ferguson who coached him during his years at Manchester United, Beckham “practised with a discipline to achieve an accuracy that other players wouldn’t care about.” Beckham knew that honing this skill would raise his value and performance as a player.

Throughout his career, he was known for his bending free kicks and his ability to convert set pieces into goals. In his 20 years as a player, he converted 65 free kicks into goals. Over half of the 114 goals he scored during his career came from set pieces.

3. Look for new ground to break

During his career, Beckham played for major teams in four world-class football leagues — the English Premier League, Spain’s La Liga, Italy’s Serie A and the French Ligue 1. Despite his many accomplishments, it is his role as a soccer ambassador and his desire to champion the sport that makes him stand out from other players of his generation.

Beckham was the first major football star to get involved with Major League Soccer (MLS) in the United States when the LA Galaxy signed him for a 5-year stint worth US$32.5 million. In an interview with sports channel ESPN, he said, “I’m coming there not to be a superstar. I’m coming there to be part of the team, to work hard and to hopefully win things. With me, it’s about football. I’m coming there to make a difference. I’m coming there to play football … I’m not saying me coming over to the States is going to make soccer the biggest sport in America. That would be difficult to achieve. Baseball, basketball, American football, they’ve been around. But I wouldn’t be doing this if I didn’t think I could make a difference.”

At that time he was still playing a high level of football, and arguably could’ve played in any of the top clubs around the world. Yet Beckham was willing to step out of his comfort zone of top football leagues into a fledgling one in order to boost the profile of the sport in America. It was an admirable move that displayed his passion for the sport and desire to grow its presence in the largest sporting nation in the world.

Leadership is about finding new ground to break, making moves that others may not be willing to do and blazing a path for the next generation that comes after you. What legacy do you want to leave as a leader? 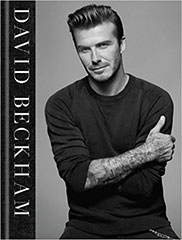 A soccer player who became a worldwide icon, transcending the spheres of sport, fashion and celebrity; David Beckham recounts his amazing career in this candid autobiography. 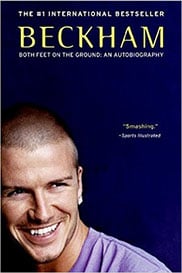 Beckham: Both Feet on the Ground: An Autobiography

Fame can take its toll on anyone. No matter how popular someone is, we are, after all, human. David Beckham shows us a different side, one not often portrayed by the media. 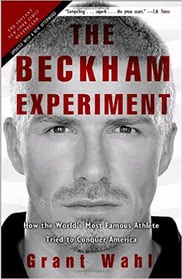 The Beckham Experiment: How the World’s Most Famous Athlete Tried to Conquer America

When David Beckham signed a major contract with an American team, the news shocked the world of sports and legions of fans. Read all about this audacious attempt to take over American soccer and the larger-than-life characters behind it.

“As a footballer, you always want to test yourself against the best.”

“People react to criticism in different ways, and my way is definitely to come out fighting.”

“I just want people to see me as a hard-working footballer and someone who is passionate about the game.”

“I still look at myself and want to improve.”

“That was my way of getting through difficult times of low confidence – hard work.”

“I’m a very stubborn person. I think it has helped me over my career. I’m sure it has hindered me at times as well, but not too many times. I know that if I set my mind to do something, even if people are saying I can’t do it, I will achieve it.”

“We stay as a team. I might be England captain, but that doesn’t mean I get treated differently.”

“Football’s the biggest game in the world. America’s the greatest sporting nation there is. To play some part in putting those two things together: why wouldn’t I be excited about that?”

“With [Manchester] United, we’d all grown up together, we all wanted to win the biggest trophy in football. We did it together.”

“I always say that practice gets you to the top most of the time.”

“I never do anything half-heartedly. I will continue to work hard and play hard and do everything I can to be successful, whatever I do.”

Learn more about David Beckham in his documentary: