Henry Ford was the founder of the Ford Motor Company. He revolutionized the modern day assembly-line method of production for his Model T cars. He was also an inventor credited with over 100 patents. During his time, he was one of the richest people in the world.

Henry Ford was born on July 30th, 1863 into a family of six on a farm in Detroit, Michigan. In his youth, he showed an extraordinary capability to take things apart and put them back together. He learned to repair and dismantle a pocket watch that his father gave to him, which earned him a reputation as a watch repairman. Although he lived on a farm, his passion was always elsewhere. At 16, he moved to Detroit to start work as a machinist.

He started the Detroit Automobile Company in 1899 in a bid to create automobiles for the masses. However this venture failed and the company shut down in 1901.

In 1903, he started the Ford Motor Company with several other investors. His first model, the ‘999’, was the car that rocketed the Ford brand throughout the United States. His company also paid its workers extraordinarily high wages for its time, drawing much talent and skills to his company’s operations.

His breakthrough came when he designed the Ford Model T. This model was priced low (around $21,000 in today’s dollars) and attracted millions of buyers who had never driven before. In its first 20 years of production, total output amounted to over 15 million cars.

Ford also founded the Ford Airplane Company, which was set up during World War I to support the United States in their aircraft production. It was eventually shut down during the Great Depression due to poor sales.

In September of 1945, with his health declining, Ford handed over the company to his grandson. Henry Ford passed away in 1947, at age 83.

Today Ford Motor Company is one of the largest car manufacturers in the world with over 11,000 dealerships worldwide.

Henry Ford valued his workers highly and exemplified that by paying them handsomely. He raised the wages of his employees so that they could afford the cars they were building. As a result, he drew talent from all over the region to work in his company and lowered the turnover rate.

Providing your staff with remuneration that is commensurate to their skills and experience is the first step to showing that you value them. However, don’t forget that people want to work for more than just a salary. They want to work in an environment where they feel appreciated and like an essential part of the organization. If you can show that you value each person on your team, you will attract talent.

Strive to give your team members the feeling they are valued, whether by means of salary or by recognition and in the long run, you’ll attract strong people to your organization.

Ford believed in himself. He knew that he needed to surround himself with like-minded people so he hired workers who were willing to push the limits of their imagination.

3. Be a service leader

A service leader focuses on solving the needs of his/her customers, employees, and community. Ford was an adamant believer in the service leadership philosophy and famously proclaimed, “A business absolutely devoted to service will have only one worry about profits. They will be embarrassingly large.” Indeed, Ford was paid handsomely for his service, and sold upwards of 20 million cars in his lifetime.

Instead of focusing on what you can get as a leader, focus instead on what value and service you can give to your team. Help your team members grow, and they will help you achieve your vision. 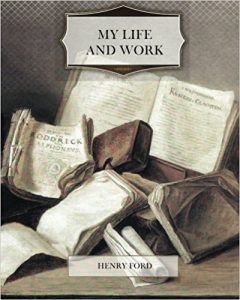 My Life and Work

Many books written about Henry Ford blatantly attack the man, while others praise his lifework and accomplishments. My Life and Work is written by Henry Ford and offers his own perspective, going into great detail about the most important decisions made by this greatly influential man. 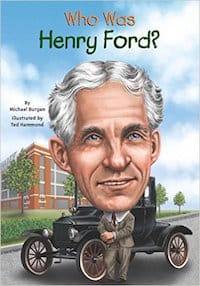 Who Was Henry Ford?

Follow the path of one of the greatest industrialists and see how he went from a small farm as merely a mechanically inclined youth, all the way to becoming an iconic car designer and manufacturer who shaped American industry. This is the story of the genius behind the assembly line. 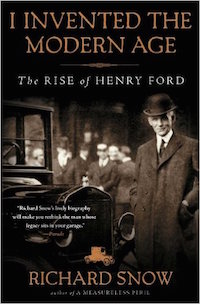 I Invented the Modern Age: The Rise of Henry Ford

A social visionary, industrial innovator, and a figure of controversial character, Henry Ford invented the machine that would irrevocably define twentieth-century America. I Invented the Modern Age: The Rise of Henry Ford is a thorough and entertaining overview of his indelible success.

A business that makes nothing but money is a poor business.

If there is any one secret of success, it lies in the ability to get the other person’s point of view and see things from that person’s angle as well as from your own.

Life is a series of experiences, each one of which makes us bigger, even though sometimes it is hard to realize this. For the world was built to develop character, and we must learn that the setbacks and grieves which we endure help us in our marching onward.

There is joy in work. There is no happiness except in the realization that we have accomplished something.

You will find men who want to be carried on the shoulders of others, who think that the world owes them a living. They don’t seem to see that we must all lift together and pull together.

An idealist is a person who helps other people to be prosperous.

Anyone who stops learning is old, whether at twenty or eighty. Anyone who keeps learning stays young. The greatest thing in life is to keep your mind young.

There is no man living that can not do more than he thinks he can.

There is one rule for the industrialist and that is: Make the best quality of goods possible at the lowest cost possible, paying the highest wages possible.

I cannot discover that anyone knows enough to say definitely what is and what is not possible.

I do not believe a man can ever leave his business. He ought to think of it by day and dream of it by night.

Money is like an arm or leg – use it or lose it.

There are no big problems, there are just a lot of little problems.

Thinking is the hardest work there is, which is probably the reason why so few engage in it.

Wealth, like happiness, is never attained when sought after directly. It comes as a by-product of providing a useful service.

When everything seems to be going against you, remember that the airplane takes off against the wind, not with it.

Whether you believe you can do a thing or not, you are right.

It has been my observation that most people get ahead during the time that others waste.

Before everything else, getting ready is the secret of success.

Competition is the keen cutting edge of business, always shaving away at costs.

Failure is simply the opportunity to begin again, this time more intelligently.

I am looking for a lot of men who have an infinite capacity to not know what can’t be done.