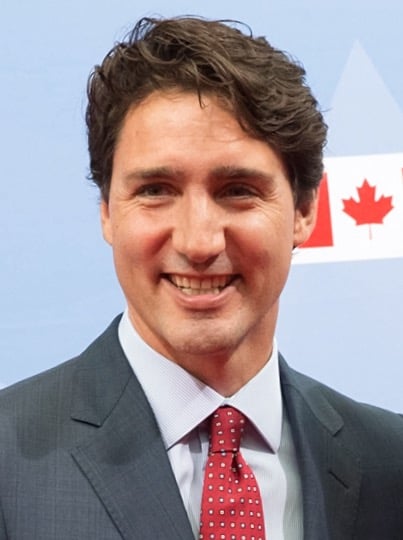 Justin Trudeau is the current Prime Minister of Canada. He is the eldest son of legendary Canadian Prime Minister, Pierre Trudeau. Known as a charismatic and engaging leader, he is the second youngest to ever hold the prime ministership.

Despite his privileged background, his mother insisted that he attended public school. He even took the bus to school (with a Royal Canadian Mounted Police escort)! His parents separated in 1977, and when their divorce was finalised in 1984, the Trudeaus moved to Montreal. There, Trudeau attended his father’s alma mater, Collège Jean-de-Brébeuf.

Trudeau did well in school and earned a BA in Literature from McGill University and a B.Ed degree from the University of British Columbia. He also studied engineering at Université de Montréal and was a Masters student in Environmental Geography at McGill, but did not complete those programs.

As a young adult, Trudeau tried his hand at various jobs — nightclub bouncer, snowboard instructor — before he settled on teaching as his career.  He gained the attention of the Canadian public in 2000 when he gave a heartfelt eulogy at his father’s state funeral. However, at that time, Trudeau was still resistant to entering politics.

That changed in 2007 when Trudeau decided to campaign in the district of Papineau for the Liberal Party nomination. He won the nomination with a large majority vote and went on to win the Papineau election the next year. Thereafter, his political career gained traction: between 2008 – 2009, he became a member of parliament of the Official Opposition, he chaired the Liberal Party’s national convention, and he became the party critic for issues like youth, multiculturalism and immigration.

Trudeau’s political ambitions grew, and, following the resignation of Liberal Party leader Michael Ignatieff in 2012,  he campaigned for the position. He won a resounding 80.1% of the vote, and secured his position as leader of the party.

In 2015, Trudeau finally sought the highest leadership position in Canada and campaigned for the prime ministership. His campaign was known for its positive and progressive tone; among other things, Trudeau promised to fight climate change, protect abortion rights and cut taxes for the middle class.

His campaign resonated with Canadians and led to the Liberal Party winning a massive increase in seats in the federal election — from 36 to 184 seats. Trudeau was sworn in as the 23rd Prime Minister of Canada on 4th November 2015. At age 43, Trudeau is the second youngest to ever hold the position.

1. See adversity as an opportunity

When he became leader of the Liberal Party, Trudeau had the uphill battle of trying to win back supporters after the party had suffered devastating losses in previous elections, which relegated it to being the third party in Canada. In addition, Trudeau faced criticism that he was too young and inexperienced to lead the party. And during his campaign for the prime ministership, he was soundly attacked in negative ads by the Conservatives.

Trudeau approached these obstacles with focused energy and a positive attitude. Not once during the election campaign did he resort to attacking his opponents; instead, he campaigned based on issues that were important to both him and the Canadian people, promising change and a new style of leadership that drew a lot of support. Trudeau saw adversity as an opportunity — an opportunity for change and to make a positive impact.

To be an effective leader, it’s important that you have the mental acuity to reframe adversity as opportunity. If your team or organization isn’t doing as well as you’d like, use the situation to reflect on what you can do better, how you can approach challenges in a more creative way, and if doing things differently could lead to change and growth.

Trudeau’s likability as a leader can be attributed to his high emotional intelligence. In contrast to most politicians, Trudeau comes across as authentic and willing to engage in discussions with people on a wide range of topics. He seems relatable and, more importantly, seems to be able to relate to people of different backgrounds and opinions. His openness and empathy makes him an engaging and charismatic leader.

Leadership is ultimately about people — managing their expectations, hopes, abilities and talents. Developing your emotional intelligence will give you the tools to better relate and connect with others. Being able to understand and manage differences in personalities and perspectives is a key leadership skill. Here are 5 steps to develop your EQ.

3. Surround yourself with a great team

In building his cabinet, Trudeau selected talented individuals from different backgrounds — professionally, culturally and personally — as he believed that having a diversity of voices and opinions would be more beneficial for the country. He also kept his election promise of appointing a gender-balanced cabinet. Given the cultural and religious diversity in Canada, this move showed that Trudeau understands that a leader is only as good as the team that he surrounds himself with.

If you have an opportunity to build your team, consider how your teammates’ skills, experiences and talents will complement yours and add to the overall strength of the team. If you already lead a team now, take the time to learn more about your teammates — what they’re good at, what they love about their job, how they’d like to advance in their career. Build stronger bonds with your team and help them develop their skills and talents so that they can contribute higher quality work.

Remember: your effectiveness as a leader depends a lot on the people you lead!

“You can’t run a government from one single person. What instead matters is that leadership be about gathering around extraordinary individuals and getting the best out of them.”

“When my father died, I had millions of people supporting me in a very, very difficult time. I have received so much from this country. I realize that we’re defined in life not by what we get from this world but by what we have to offer it, and I know that I have a lot to offer this country, and I’m serious about devoting my life to it.”

“Who cares about winning? We should focus on serving.”

“I look at what I have as a challenge and I could list a whole bunch of different challenges. And I choose not to be daunted by any of them.”

“I was a snowboard instructor, I was a bouncer in a nightclub, I was a whitewater river guide for many years. I worked as a teacher. I make no apologies for a very varied set of life experiences.”

“Leadership should be focused on extending the ladder of opportunity for everyone.”

“To get involved in the public life of this country….and to know that a positive, optimistic, hopeful vision of public life isn’t a naive dream. It can be a powerful force for change.”

Watch this interview with Justin Trudeau: