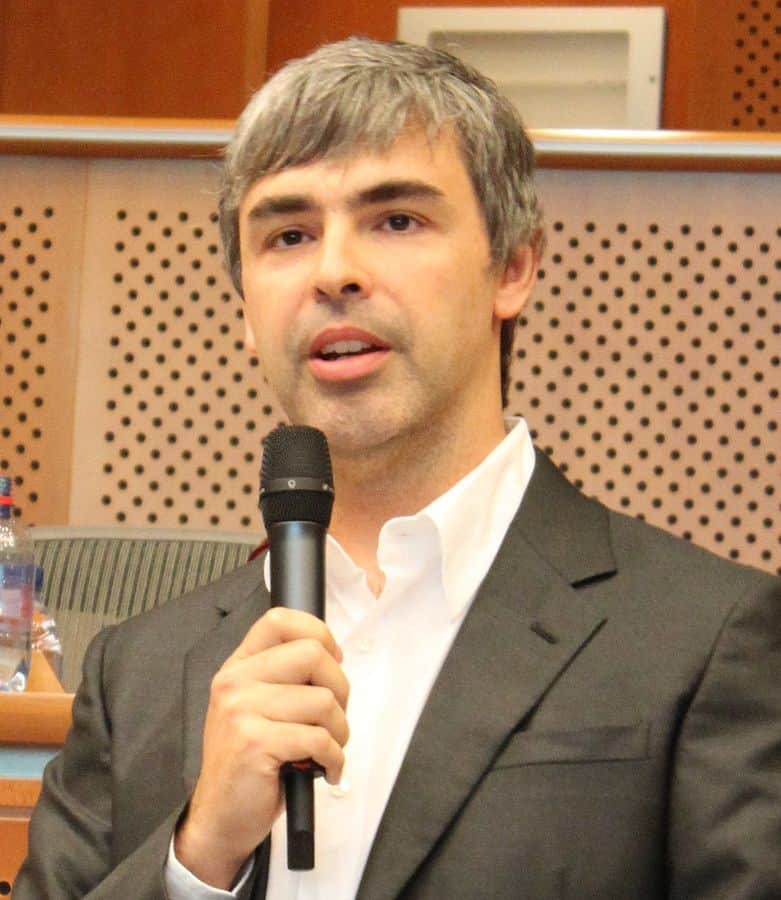 Larry Page is known as the co-founder of Google Inc. He is the current Chief Executive Officer of Alphabet Inc., the parent company of Google. Page invented PageRank which is Google’s most well-known search engine algorithm.

Larry Page was born on March 26th, 1973 in Michigan. His parents both taught computer sciences at Michigan State University; his father was a computer science professor and his mother was a computer programming instructor. Page grew up around computers, and this sparked his passion for invention, technology and business.  As a child, Page learned music composition and how to play the saxophone, and he credits his music education with inspiring him to incorporate speed in computing.

Page earned his bachelor’s degree in computer engineering from the University of Michigan and went on to Stanford University to complete his Master of Science in computer science. He stayed at Stanford for his PhD in computer science, where he examined the structure and properties of the World Wide Web. It was during this time that he met Sergey Brin; Brin joined the project and together, they worked on building a search engine that was far more complex and comprehensive compared to existing ones at the time.

The first version of Google debuted in August 1996, but it was only in 1998 that Page and Brin incorporated Google Inc. The company’s success attracted investors, which led to further expansion. By June 2000, Google had indexed over one billion URLs.

Due to pressure from investors, Page stepped down as CEO in 2001, although he remained the de facto leader of the company. In fact, Google’s IPO in August 2004 bore Page’s signature — a move that made him a billionaire at age thirty. Page’s passion for mobile computers led him to acquire Android in 2005 at the cost of $50 million.

Page returned as Google’s CEO in April 2011. His second tenure as CEO saw him consolidating the different business lines and streamlining the management team. Page took a long-term view of success and focused Google’s business strategy on usefulness over profitability. Notable developments during this time include the launch of Google’s social network, Google+, the acquisition of Motorola Mobility and the development of Chromebook, a laptop with Google’s operating system called Chrome OS.

In 2015, with the creation of a new holding company, Alphabet Inc, to manage Google and its many subsidiaries, Page announced that he would lead that company, with Sundar Pichai taking over as CEO of Google Inc.

As of November 2016, Page has an estimated net worth of US$36.9 billion. Google is the most visited website in the world, with a estimated one million data servers around the world and a valuation of US$133 billion in 2016.

Do you ever have crazy ideas in your dreams? Page did; he dreamt that he downloaded the Internet and saved all its links — and that dream was the birth of Google’s search engine. Page, together with Brin, conceived of a search engine algorithm that would calculate the importance of a page based on its backlinks (and the quality of those backlinks). Called Pagerank, this algorithm remains one of Google’s competitive advantages over other search engines.

As a leader, Page believes in cultivating crazy ideas that can have a big impact in the world. He once said: “I think it is often easier to make progress on mega-ambitious dreams. Since no one else is crazy enough to do it, you have little competition. In fact, there are so few people this crazy that I feel like I know them all by first name.” By believing in huge world-changing ideas, he attracts world-class talent to Google. With Page at the helm once again, Google and Alphabet Inc. are hacking away at more ideas that can change the way we live.

What are you doing as a leader to encourage innovation and creativity in your organization? Does your team feel motivated to improve on your company’s offerings and services? Great leaders carve the path to growth by encouraging boldness of thought and action.

2. Take care of your team

Google has a reputation for being one of the best places to work: free food, massages, health care benefits etc. The idea behind this approach is treating employees like family and creating a environment of care and togetherness.

But beyond just lifestyle perks, Page believes in providing his employees with work that is meaningful and giving them the opportunity to be part of projects they are passionate about. This care in ensuring employees feel engaged and committed to their work is what makes Google such a well-regarded employer. It’s also why many of the initial core team at Google (who are now well-off in their own right) continue to work in the company.

Most organizations have room for improvement when it comes to taking care of their employees. While providing tangible lifestyle perks are an easy fix, increasing employee engagement in the long run involves doing more. What can you do as a leader to give your team more opportunities to contribute their ideas, feel committed to the company’s goals and do work that is meaningful to them?

Google’s early years were marked by Page’s fierce and intense discussions with Brin, which then became a template for interaction between senior management. His time away from the position of CEO taught him why that adversarial approach wasn’t healthy for the company. When he returned for his second tenure as CEO, Page departed from that management style and instituted a “zero tolerance for fighting” policy.

He recognized the need for collaboration and cooperation between employees because the company’s goals had changed and became more complex over the years; the aggressive communications approach that had previously worked for Google was now a hindrance. This new policy allowed for better communication and unity between teams and the different divisions within the growing Google organization. This profile article by Business Insider provides great insight into Page’s growth as a leader.

By refocusing on collaboration over competition, Page fostered a ‘safe’ environment for employees to share ideas, innovate and attain results that they might not have otherwise reached. As a leader, how can you further encourage collaboration and build unity within your team? Team building activities can be an excellent experiential learning tool to resolve differences in communication and working styles.

“If we were motivated by money, we would have sold the company a long time ago and ended up on a beach.”

“If you’re changing the world, you’re working on important things. You’re excited to get up in the morning.”

“Have a healthy disregard for the impossible.”

“Optimism is important. You have to be a little silly about the goals you are going to set. You should try to do things that most people would not do.”

“My job as a leader is to make sure everybody in the company has great opportunities, and that they feel they’re having a meaningful impact and are contributing to the good of society. As a world, we’re doing a better job of that. My goal is for Google to lead, not follow that.”

“Especially in technology, we need revolutionary change, not incremental change.”

“Anything you can imagine probably is doable. You just have to imagine it and work on it.”

“You know what it’s like to wake up in the middle of the night with a vivid dream? And you know that if you don’t have a pencil and pad by the bed, it will be completely gone by the next morning. Sometimes it’s important to wake up and stop dreaming. When a really great dream shows up, grab it.”

“Many leaders of big organizations, I think, don’t believe that change is possible. But if you look at history, things do change, and if your business is static, you’re likely to have issues.”

“We want to build technology that everybody loves using, and that affects everyone. We want to create beautiful, intuitive services and technologies that are so incredibly useful that people use them twice a day. Like they use a toothbrush. There aren’t that many things people use twice a day.”