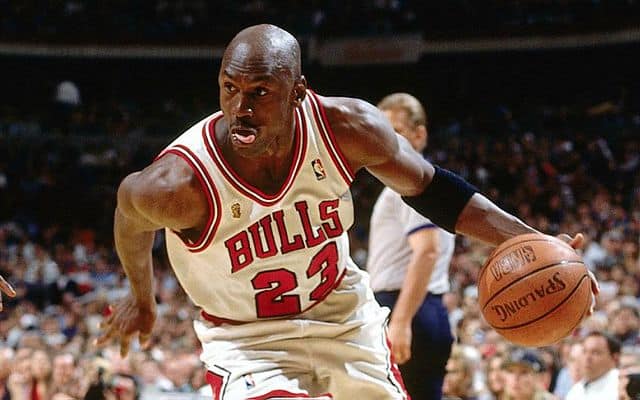 Michael Jordan was born in Brooklyn, New York on February 17th, 1963. He grew up in Wilmington, North Carolina, and played basketball while in high school. As a varsity player, he scored an average of 20 points per game and he was named to the McDonald’s All-Star team when he was a senior. He was scouted by several college basketball teams and eventually chose to play at the University of North Carolina, Chapel Hill.

Jordan played under legendary coach Dean Smith during his three seasons at UNC, and he was part of the 1982 NCAA championship-winning team. He made the winning jump shot, something Jordan has credited as a pivotal moment in his basketball career. He left college one year early and entered the 1984 NBA Draft where the Chicago Bulls used their third pick to draft him.

As a rookie, Jordan had a great start in the NBA. He quickly gained the attention of fans, was a starter in the NBA All-Star game and won the Rookie of the Year award. He led the NBA in scoring for 3 consecutive seasons and was named the Most Valuable Player (MVP) and the Defensive Player of the Year in the 1987-88 season.

In 1989, with new head coach Phil Jackson, the Bulls became a rising team in the NBA. For the first time, they made it to the NBA Finals in the 1990-91 season; they beat the Los Angeles Lakers to win the NBA trophy and Jordan was named the NBA Finals MVP. Their championship success continued in the next two seasons with the Bulls retaining their NBA title and Jordan becoming the first player to earn three consecutive Finals MVP awards.

In 1993, Jordan surprised everyone by announcing his retirement, citing his father’s death and exhaustion from his high-profile career as reasons for retirement. In another surprising move, he signed on with a minor league baseball team in 1994.

His return to the NBA on March 18th, 1995 rejuvenated the Bulls franchise. The team went on to dominate the league, winning three consecutive NBA finals. Jordan was Finals MVP for all 3 seasons and his record of 6 Finals MVP awards still holds today.

Jordan retired for the second time in 1999, and he became part owner and President of Basketball Operations of the Washington Wizards in 2000. He made another comeback as a Wizards player in 2001, before retiring for the final time on April 16th, 2003. In 2010, Jordan became the majority owner of the Charlotte Hornets team, becoming the first former player to transition to a majority owner.

1. Learn all aspects of the game

The enduring image of Michael Jordan is that of the ‘Air Jordan’ brand – Jordan’s silhouette as he leaps in the air to slam dunk. It’s an image that belies the fact that Jordan was a well-rounded player who was strong on both sides of the court. He had almost 50% shooting accuracy and was well-known for his fadeaway jump shots, impressive dunks and ability to break through screens.

While it was his exciting offensive plays that got the fans roaring, he also had a solid defensive game. Jordan held season and career records for blocked shots by a point guard and ranks third for total steals in NBA history. And when the NBA shortened their three-point line, Jordan became a long-range threat as well. For instance, in the first half of Game 1 of the 1992 Finals, he set a record by nailing 6 three-pointers.

Jordan’s commitment to learning all aspects of the game is something every leader should emulate. His arsenal of skills gave him the confidence to execute no matter what game circumstances he found himself in, and his versatility as a player made him a tough opponent. What are you doing to learn all aspects of your business or work? What can you improve on in order to better lead your team? Having a toolkit of expansive knowledge and skills will make you a more effective leader.

Although Jordan’s first five seasons with the Bulls were good, it was his later years with the team, under the coaching of Phil Jackson, that earned him legendary status and 6 championship rings. The difference? Jackson molded Jordan into a team-player who trusted his teammates. By the time Jackson became head coach of the Bulls, it was clear that Jordan was a star player. But Jackson knew he needed more than one great player to win championships; he needed a exceptional team.

So Jackson persuaded Jordan that his leadership was needed in order to strengthen the unity of the team. Jordan made the effort to get to know his teammates off the court, and on the court, his work ethic and tenacity challenged them to meet his standards. As the bonds between the players strengthened, so did their play during games.

Jordan’s trust in his teammates was exemplified in how other players were given the responsibility of big shots in key games. One example was Game 6 of the 1993 Finals, where the Bulls were down 2 points to the Phoenix Suns in the last few minutes. Instead of the expected Jordan clutch shot, the ball was passed to John Paxson who nailed a 3-point shot to win the game.

As a leader, resist the temptation to run a one-man show. You cannot achieve greatness on your own! Instead surround yourself with talented, capable people who share your vision, and trust them to help your organization succeed.

One of Jordan’s greatest strengths was his ability to deliver when under pressure. In tight situations when his team needed results, Jordan was always willing to step up and make the deciding play. This compilation of Jordan’s best clutch performances is a great illustration of how he rose to the occasion when it was just him against the clock.

Jordan did not let the weight of the moment drag him down; instead his fierce need to win and competitive nature drove him to deliver when it mattered the most. His ability to thrive under pressure was anchored by his belief in his skills (honed by years upon years of practice) and his control of his emotions.

Whether it’s sports, business, or whatever your sphere of influence is, you will face stressful situations as a leader. Be confident of your decision-making skills, use your experience to guide you, and don’t let emotions rule the day.  Develop the skills and mental strength to thrive under pressure. It’s during these moments that your team needs you the most, so don’t shy away from the responsibility of making tough decisions.

“I’ve missed more than 9000 shots in my career. I’ve lost almost 300 games. 26 times, I’ve been trusted to take the game winning shot and missed. I’ve failed over and over and over again in my life. And that is why I succeed.”

“I can accept failure, everyone fails at something. But I can’t accept not trying.”

“If you’re trying to achieve, there will be roadblocks. I’ve had them; everybody has had them. But obstacles don’t have to stop you. If you run into a wall, don’t turn around and give up. Figure out how to climb it, go through it, or work around it.”

“My attitude is that if you push me towards something that you think is a weakness, then I will turn that perceived weakness into a strength.”

“To be successful you have to be selfish, or else you never achieve. And once you get to your highest level, then you have to be unselfish. Stay reachable. Stay in touch. Don’t isolate.”

“Sometimes, things may not go your way, but the effort should be there every single night.”

“I’ve always believed that if you put in the work, the results will come.”

“You have competition every day because you set such high standards for yourself that you have to go out every day and live up to that.”

“I hope the millions of people I’ve touched have the optimism and desire to share their goals and hard work and persevere with a positive attitude.”

Watch Michael Jordan’s induction into the NBA Hall of Fame: