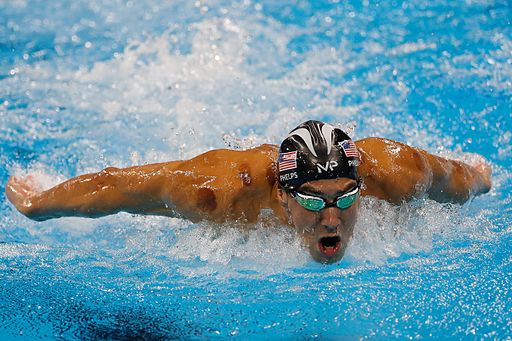 By Fernando Frazão/Agência Brasil [CC BY 3.0 br], via Wikimedia Commons

Michael Phelps is a retired competitive swimmer, and is known as the most decorated Olympic athlete of all time. In 5 Olympic Games spanning 2000 to 2016, Phelps earned a record 28 medals, 23 of them Gold. He also holds the record for most Gold medals in a single Games when he won 8 in the 2008 Beijing Olympics.

Michael Phelps was born on June 30th, 1985 in Baltimore, Maryland. He was the youngest of three and got into swimming at age 7, following the lead of his elder sisters who were also swimmers. As a young swimmer, he broke national records for his age group. His talent caught the attention of Bob Bowman who began coaching him when he was 11.

Phelps started his Olympic career at age 15, and was the youngest male to qualify for the U.S. Olympic swim team in 68 years. He participated in the 2000 Olympic Games, and placed 5th in the 200m men’s butterfly. He made his mark in the international swimming world the following year, when he set the world record for the 200m butterfly at the trials for the 2001 World Aquatics Championships. This feat earned him the accolade of being the youngest male swimmer (15 years and 9 months) to ever set a world record in swimming. He went on to beat his own world record at the World Championships final, and became a world champion for the first time.

Phelps increased his roster of swimming events in the following years, competing in other events such as the 200m individual medley and 200m freestyle among others. By the time the 2004 Olympic Games in Athens came around, Phelps had built his reputation as a fierce competitor in the pool. He competed in 8 events in Athens, winning 6 Gold and 2 Bronze medals.

The spotlight shone brightly on Phelps at the 2008 Beijing Olympics, after it was announced that he would compete in 8 events and was aiming to beat Mark Spitz’s legendary feat of 7 Gold medals in a single Games. Phelps 7th event was his signature, the 100m butterfly. He won the event in dramatic fashion, edging out Serbian swimmer Milorad Cavic by one hundredth of a second (0.01s). This win, the only wherein Phelps did not break a world record, equalled Spitz’s record 7 Golds in the 1972 Olympics. His 8th Gold came as part of the U.S. team that won the 4x100m medley relay; Phelps swam the butterfly leg in the fastest split ever for the event, giving his team the necessary lead to win.

Leading up to the 2012 London Olympics, Phelps stated that he would not compete in 8 events again. During the U.S. trials, he qualified for the same 8 events as he did for Beijing, but chose to drop the 200m freestyle. His first event at the London Olympics was the 400m individual medley, which he had won in the last two Olympics. He came in 4th — the first time he failed to medal since his Olympic debut in 2000. However, he rebounded from that loss; for the rest of his swimming program, Phelps earned 4 Gold and 2 Silver medals. His Gold in the 4x200m freestyle relay broke the record of most Olympic medals won by a single athlete.

Phelps announced his retirement from swimming after the 2012 Olympics, but the retirement only lasted 2 years. He returned to competitive swimming by winning the 100m butterfly at the Arena Grand Prix in May 2014. His time away from the sport didn’t hinder his performance — at the U.S. National Championships in 2015, Phelps clocked the fastest times in the world in the 3 events he competed in.

At the U.S. Olympic Trials, Phelps became the first American male swimmer to qualify for a 5th Olympics when he won the 200m butterfly, 200m individual medley and 100m butterfly. He competed in 6 events at the 2016 Rio Olympic Games, winning Gold in all except the 100m butterfly. His multiple Gold medals in Rio is notable due to his age; Phelps was 31, an age beyond the usual peak for swimmers.

During his career, Phelps experienced some lows.  There were two notable incidents that affected his public profile. One was in February 2009 when a photo of him using a bong was published. The incident led to Kellogg dropping their sponsorship deal with him, and a 3-month suspension from swimming. The other occurred in September 2014 when he was arrested for driving under the influence. Phelps was suspended from competitive swimming for 6 months and banned from representing the U.S. at the 2015 World Aquatics Championships. Regardless of these setbacks, Phelps’s focus remained on reaching the highest peak of his sport.

In his years of competitive swimming, Phelps set 39 world records, and as of December 2016, he still holds 7 of them. Phelps has stated he is retired from swimming, after ending his Olympic career in Rio the way he wanted to. With 28 medals to his name, 23 of them Gold, Phelps is the most decorated Olympian in history. He also holds the record for most Gold medals in individual events (13), and most Gold medals in a single Games (8 in Beijing 2008).

1. Focus on what you’re doing, not your competitors

Phelps’ success as an athlete can largely be attributed to his mental strength and focus. As a swimmer, it’s a solitary life in the pool day in and day out, doing drills and laps during long training sessions. At the highest levels, competitive swimming is about technique and perfecting little details that can give you even the smallest of advantages against your competitors.

Phelps and his long-time coach, Bob Bowman, would work on improving his kicks, turns and stroke technique and find ways to shave precious tenths of a second off his swim times. For instance, conventional wisdom has swimmers taking a breath every two strokes when swimming butterfly. However, his coach found that Phelps swam faster when he took a breath on every stroke.

His pre-race ritual is another way Phelps honed his focus and mental energy before competing. Having a defined routine allowed him to get into the mindset he needed to focus on his own performance, and to visualise the perfect race.

While it is useful to take note of what your competitors are up to, your leadership can be more effective if you first focus on improving the performance of your own team or organization. Take the time to assess your team’s strengths and weakness. Perhaps sending your team on a training course would improve their skills, or you could redistribute the workload to leverage on your staff’s individual strengths.

At the 2008 Beijing Games, in the 200m butterfly finals, Phelps took the Gold with a 0.7s margin, breaking a world record. What’s remarkable about that win is how he managed to do it even though his goggles filled up with water and he was racing blind in the last 75m. When interviewed about the incident, Phelps shared that he relied on knowing his stroke count for each 50m to finish the race. Coach Bowman also once made him swim in practice with faulty goggles, so that he would know how it felt to swim blind.

When Phelps returned to swimming after his first retirement, he and his coach worked on a different training regimen to get his fitness and form back up, and also to account for how his age could affect his performance. Their approach paid off; leading up to the 2016 Rio Games, Phelps was confident of his swimming and his wins proved that the preparation he put in was effective.

Being prepared for different situations eliminates stress, and gives you the confidence to do well no matter the circumstances. Whether it’s a presentation, meeting with clients or knowing the details of your project, preparation puts you on the road to success.

Aside from talent and hard work, getting the right coaching can make a huge difference for an athlete. Phelps was fortunate to receive guidance from Bowman, both in and out of the pool, since he was 11. Bowman understood what was needed — both in terms of physical training and psychological strength — to develop Phelps into a world-class athlete.

Through the highs (that record-breaking Beijing Olympics) and the lows (Phelps’ lack of commitment leading up to the 2012 Games), Bowman has mentored Phelps. It is a relationship that allowed Phelps to develop into the iconic swimmer he is today.

In your journey to become an effective, inspiring leader, having a mentor or coach can be invaluable. Like any coach-athlete relationship, a mentor can inspire you, share their own experiences, and guide you to tools and resources to help you achieve your goals.

Is there someone in your field whose work you admire or whose achievements inspire you? Find a way to meet and connect with that person, talk to them to get their insights and advice. If it’s a natural fit, it can develop into a mentorship that can help your leadership development.

Alternatively, you can look into hiring a business or life coach who can help take your work to the next level.

“You can’t put a limit on anything. The more you dream, the farther you get.”

“I like to just think of myself as a normal person who just has a passion, has a goal and a dream and goes out and does it. And that’s really how I’ve always lived my life.”

“I can only control my own performance. If I do my best, then I can feel good at the end of the day.”

“I think that everything is possible as long as you put your mind to it and you put the work and time into it. I think your mind really controls everything.”

“If you want to be the best, you have to do things that other people aren’t willing to do.”

“Things won’t go perfect. It’s all about how you adapt from those things and learn from mistakes.”

“So many people along the way, whatever it is you aspire to do, will tell you it can’t be done. But all it takes is imagination. You dream. You plan. You reach. There will be obstacles. There will be doubters. There will be mistakes. But with hard work, with belief, with confidence and trust in yourself and those around you, there are no limits.”

“I knew I was not a failure in any way, and so did those close to me. It doesn’t matter if you fall short; it is never a failure to go after goals with everything you’ve got.”

Watch Anderson Cooper’s interview with Michael Phelps, where he talks about his 8 Gold medal feat in the 2008 Beijing Olympics: