Ray Kroc is the man behind the multimillion dollar fast food empire, MacDonald’s. 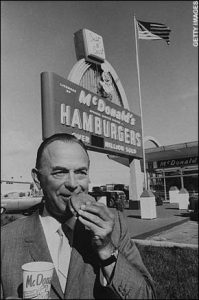 In his life, he has built the fast food chain from a simple hamburger restaurant to a multi-billion dollar franchise that has reached almost every part of the world today.

Ray Kroc was born in 1902 in the city of Illinois. He had grown up to be a brash, enthusiastic young man who was a visionary and a salesman.

During World War I, although he was underage, he still signed up to be trained as a ambulance driver, but he never made to the front lines as the war ended before his training did.

After the war, he worked in many professions as a paper cup salesman, a pianist, a musician as well as at the Chicago Radio Station.

His breakthrough came with his fascination with the multi-mixers. He saw the potential in the McDonald’s brothers’ hamburger restaurant in churning out burgers after burgers like clockwork.

He suggested expansion to the brothers and volunteered to be the person to expand the restaurant chain. He saw great potential in the concept that the brothers did not.

Eventually he would buy over the restaurant from the brothers at $2.7 million. Ray Kroc would revolutionize the dining industry by created an assembly line method of selling his burgers that would be standardized throughout the world.

By 1963, McDonald’s would have sold its 1 billionth burger and open its 500th restaurant.

At the end of his life in 1984, Ray Kroc amassed a personal fortune of $500 million, and in 2007, the McDonald’s Corporation that he founded had achieved a revenue of $22 billion.

These are some awards that Ray Kroc has been noted for:

1. Having a big vision

He first envisioned 8 of these restaurants churning out burgers and making a steady stream of cash immediately, today, the McDonald’s arch is one of the most recognized logo in the world.

Through his vision, he became one of the foremost business leaders of the world. While others see limitations, a leader sees opportunity and possibility.

I believe that this is one of the great traits of a leader as well: to be committed to every single detail in your plans, your events and so on. Your commitment to this details is your commitment to excellence and it will set you one notch above your competition.

What’s more, having a commitment to excellence will also compel your followers to live up to that same standard as you. When you set the standard with your personal example, you can expect to build a great organization. 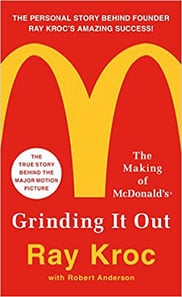 Grinding It Out: The Making of McDonald’s

As the man behind the multi-billion dollar franchise that most of us recognize (and some of us love), Ray Kroc is an outstanding businessman, entrepreneur and a great storyteller as well. Here, we meet the passionate visionary as he retells the story of his stellar success. 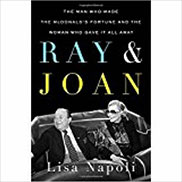 Ray & Joan: The Man Who Made the McDonald’s Fortune and the Woman Who Gave It All Away

As they say: behind every great man, there’s a great woman… But, was that the case of Ray and Joan Kroc? Take a look behind the intriguing, passionate and controversial relationship that went on behind the scenes. 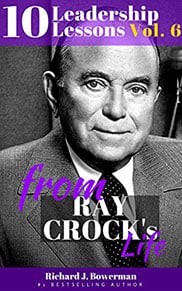 Other than being an immensely successful businessman, inspiring leader and a beloved man, Ray Kroc was a great humanitarian as well. The founder of one of the largest food empires in the world gives us 10 lessons on how to improve your business venture, connect with your employees, reach higher levels and much more.

“Luck is a dividend of sweat. The more you sweat, the luckier you get.”

“The two most important requirements for major success are: first, being in the right place at the right time, and second, doing something about it.”

“All money means to me is a pride in accomplishment.”

“We take the hamburger business more seriously than anyone else.”

“While formal schooling is an important advantage, it is not a guarantee of success nor is its absence a fatal handicap.”

“You’re only as good as the people you hire.”

“The quality of a leader is reflected in the standards they set for themselves.”

“Creativity is a highfalutin word for the work I have to do between now and Tuesday.”

“If you work just for money, you’ll never make it, but if you love what you’re doing and you always put the customer first, success will be yours.”

“If you’re not a risk taker, you should get the hell out of business.”

This is a video on the history of Macdonald’s.