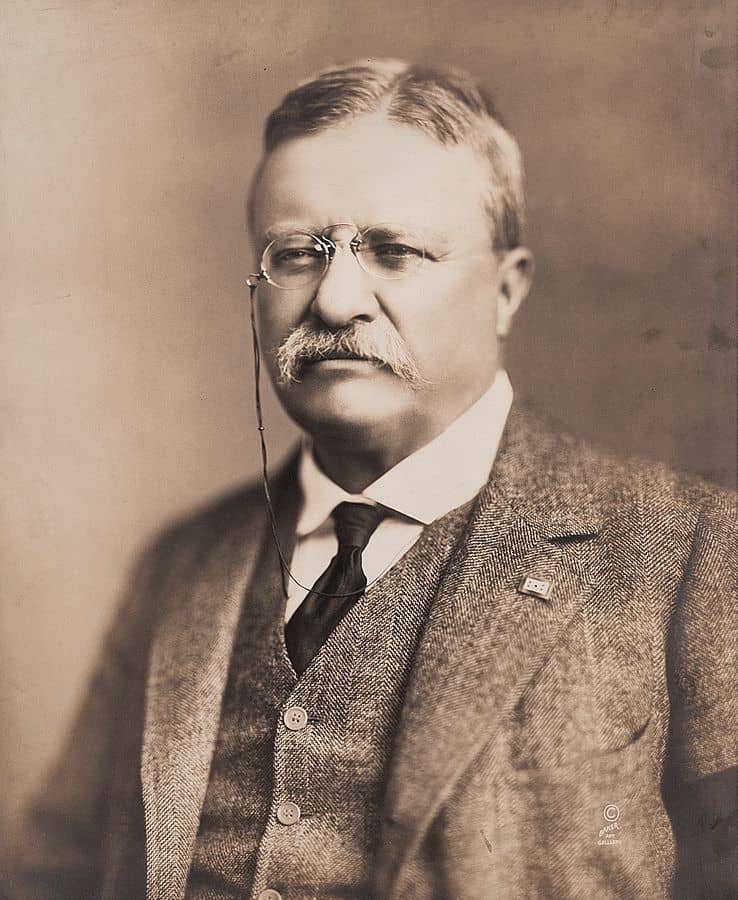 Theodore Roosevelt Jr. was an American war hero and politician who became the 26th President of the United States of America. At age 42, he was the youngest U.S. President in history. He led the country into the Progressive Era, and shaped the presidency into the center of the American political system.

Theodore Roosevelt Jr. was born on October 27th, 1858 in New York City. As a child, he suffered asthma attacks and had poor health. He overcame this by adopting an active lifestyle, which he found minimised his asthma. Roosevelt was homeschooled initially; he then attended Harvard College in 1879. He went on to study law at Columbia, but dropped out in order to enter politics.

Roosevelt’s first experience as a politician came in 1882 as a member of the New York State Assembly. He worked on issues relating to corporate corruption, which helped him get reelected. He served until 1884 and during his last term, he was Chairman of the Committee on Affairs of Cities.

In 1884, Roosevelt became involved in securing votes from delegates for the Republican presidential nominations, and the experience made him interested in national politics. However, all the political maneuvering resulted in Roosevelt losing the support of many reformers in the party. He decided to withdraw from politics and moved to the West. He bought a ranch in North Dakota, and for several years, he lived as a cowboy.

He returned to politics in 1886 and the Republican party nominated him to run for Mayor of New York City. He lost the campaign, and instead focused on writing a book, The Winning of the West. In 1888, President Benjamin Harrison appointed him to the Civil Service Commission. Roosevelt held the position until 1895 and worked hard to enforce civil service laws while in office. He then took on the role of Police Commissioner for the New York City Police Department.

In 1897, President William McKinley appointed him as Assistant Secretary of the Navy. During his time in office, Roosevelt built up America’s naval strength. He resigned from the post at the onset of the war in Cuba as he wanted to be in the thick of battle. He formed a new voluntary cavalry regiment which became known as the “Rough Riders”. Under his command, the regiment distinguished itself at the Battle of Kettle Hill. In 2001, Roosevelt was posthumously given the Medal of Honor for his part in this battle.

Roosevelt also served as Governor of New York from January 1899 to December 1900. Then he was nominated as Vice President of the United States of America in 1900 after the death of previous VP Garret Hobart. Roosevelt spent 6 months as VP, and the powerless nature of the position frustrated him greatly. After President William McKinley was assassinated, Roosevelt took over the presidency in September 1901. He was 42, the youngest to ever hold the office of president.

As president, Roosevelt championed many issues — most notably the breaking of trusts, conservation issues and tackling corruption in government offices. His foreign policy achievements include growing America’s naval strength, ending the Russo-Japanese War and supporting the construction of the Panama Canal. He also further developed and expanded the relationship between the press and the Oval Office by giving them more access via interviews and photo opportunities.

Roosevelt won the 1904 Presidential Elections; however his second term was plagued by troubles as many of his progressive policies were blocked by Congress. His effectiveness as president was also hampered by his pronouncement that he would not seek a third term in office. His close friend and Secretary of War, William Taft, succeeded him.

Freed from public life, Roosevelt went on an extended trip to Africa and Europe. He led an African safari expedition for the Smithsonian Institution and sent back thousands of salted animals and their skins for exhibition in museums. When he turned to the United States, he found himself enmeshed in politics again as he tried to win control of the Republican party. He attempted to win the 1912 Republican presidential nomination, but failed. He went on to form his own Progressive Party, becoming their presidential nominee. Although Democrat Woodrow Wilson won the election, Roosevelt came in second with a 4% vote margin over third-place Taft.

Roosevelt retreated from politics and went on another expedition, this time to South America, with support from the American Museum of Natural History. Once again, his return to the U.S. saw him getting involved in politics; he was a strong critic of President Wilson for what he deemed lenient foreign policies against Germany during World War I.

As Roosevelt remained a popular figure, he planned to fight for the presidential nomination in 1920. Unfortunately, he was in poor health due to the lingering effects of malaria. He died in his sleep in 1919.

Other than politics, Roosevelt was a prolific writer, penning books such as The Winning of the West and African Game Trails. He is credited as the U.S. president who shaped the office into what it is today. His efforts in ending the Russo-Japanese War earned him the Nobel Peace Prize in 1906, making him the first American to win that honor.

“Whatever I think is right for me to do, I do. I do the things that I believe ought to be done. And when I make up my mind to do a thing, I act.”

Roosevelt believed in taking initiative and decisive action, tenets that were likely influenced by his study of military history. He understood the value of taking the initiative and tended to complete or delegate tasks quickly. This did not mean imprudence; Roosevelt still applied a methodical approach to decision-making, thanks to his military and legislative background.

In one of his most popular speeches, known as the Man in the Arena, Roosevelt said: “The credit belongs to the man who is actually in the arena, whose face is marred by dust and sweat and blood.”

For him, leading from the front was key. During his time as Police Commissioner of the New York Police Department, he made the time to go into the field to check that officers’ were on duty during their beats. As President, he was the first to travel overseas during his tenure, a mark of how he thought America should play a larger role in world affairs. Roosevelt was not content to lead from behind a desk; he wanted to be out there to truly understand the issues that he had to solve as a leader.

The most effective and inspiring leaders are those who back up their words with action. Leaders who want to make a change must not be afraid to act — action is what leads to growth.

“As soon as any man has ceased to be able to learn, his usefulness as a teacher is at an end. When he himself can’t learn, he has reached the stage where other people can’t learn from him.”

Roosevelt is known as one of the most well-read presidents. He once said he had read tens of thousands of books during his lifetime, and according to sources close to him, he would read up to 3 books every day. His love for reading began in his early years, when his asthma confined him to bed. This developed into a lifelong passion for knowledge, aided by Roosevelt’s ability to speed read and retain large amounts of information.

Effective leaders recognize the importance of constantly improving their knowledge base — this helps them make better informed decisions, have a stronger grasp of the landscape they’re working in, and give them the tools to better direct their teams.

Evaluate your skill set as well as strengths and weakness: what can you improve on so that you can be a better leader? Perhaps it’s technical knowledge or people skills. Sometimes learning about something completely unrelated to your field can yield inspiration and insight on the issues you’re facing.

3. Fight for what you believe in

“Most of all, I believe whatever value my service may have, comes even more from what I am than from what I may do.”

Roosevelt was one of the first American statesman who remained politically active even after he left office. He was driven by his belief in the progressive movement and his desire to effect change in his country. When he became disillusioned with Taft’s presidency, he was moved to re-enter politics in order to fight for what he believed in. He even broke with the Republican party to form the Progressive Party and contested the 1912 presidential election as a third-party candidate.

He was similarly assertive in his views about America’s role in international politics. He played a key role in pushing for the Panama Canal because he knew how crucial it would be in allowing ships to travel quickly between the Atlantic and Pacific Oceans. Roosevelt was always cognizant of how America could play a larger role in global affairs and he was frustrated with the neutral stance that President Wilson initially adopted at the start of World War I. He even volunteered his military service! However, President Wilson turned him down.

Throughout his life, Roosevelt stood by his beliefs and was moved to action to support them. What do you believe in and want to achieve as a leader? The strength of your belief and your willingness to fight for them can inspire others to join you in the journey to success. Be willing to step out of the norm and take risks in order to achieve your goals!

“Speak softly and carry a big stick; you will go far.”

“The most important single ingredient in the formula of success is knowing how to get along with people.”

“The best executive is one who has sense enough to pick good people to do what he wants done, and self-restraint enough to keep from meddling with them while they do it.”

“Nothing in this world is worth having or worth doing unless it means effort, pain, difficulty.”

“Unless a man is master of his soul, all other kinds of mastery amount to little.”

“With self-discipline most anything is possible.”

“It is hard to fail, but it is worse never to have tried to succeed.”

Learn more about Theodore Roosevelt in this documentary: