If you’re a Game of Thrones fan, you probably have a horse in the King’s Landing race. With all the twists and turns over the 6 seasons, you also probably changed your mind a few times. After all, there are a lot of players in the massive chess game for the Iron Throne, and the politics and power plays are constantly evolving. Oh, plus some characters unexpectedly y’know… die, which takes them out of the running.

We’re only two seasons away from the end of the series, so everything’s coming to a head. At Leadership Geeks, we know exactly who we’re rooting for: #TeamTyrion

Here’s why we think Tyrion Lannister will win the day (spoilers ahead!):

1) He knows and accepts his strengths and weaknesses

Tyrion to Jon Snow: “Never forget what you are. The rest of the world will not.

Wear it like armor, and it can never be used to hurt you.”

From a young age, Tyrion knew of his father’s contempt for him and how his siblings blamed him for their mother’s death. He also knew that people look at him with disdain and underestimate his abilities because he was a dwarf.

Instead of feeling sorry for himself, he takes the negative perception that people have about him and uses it as armor. He understands that while he may not be as physically capable as others, he can hone his mind and his wit to out-think and out-strategize others.

Tyrion’s advice to Jon Snow is spot-on and shows his deep understanding of himself and others. He refuses to be a victim and instead builds on his strengths to find his place in the world.

Lannister Leadership Lesson: Self-awareness is crucial for effective leadership. Before you can lead others, you have to know who you are and accept yourself. Identify your own strengths and weaknesses; amplify your strengths and do work that focuses on them while putting in effort to overcome your weaknesses.

One of Tyrion’s strengths is his uncanny ability to read people and quickly pick up on what motivates and drives them. In his early interactions with Bronn, Tyrion figured out that his top two desires are women and gold. He uses that information to convince Bronn to be his champion in his trial-by-combat in the Vale.

Another example (video above) is when Tyrion finds out the background of some of the men of the Night’s Watch and advises Jon that each person has their own story — where they came from, what brought them to the Wall. He knows that such details make it easier to understand people  and thus lead them more effectively.

Tyrion recognizes that behind every action is a motivation, and uncovering that motivation allows you to speak to a person’s desires and values.

Lannister Leadership Lesson: Different people are driven by different desires, so something that appeals to one person could have zero motivating effect on another. Take the time to get to know your staff and learn what motivates and drives them. Once you have that information, it’s easier to manage your relationship with them as well as their work performance.

Organizing a team building day can be a good way to connect with your team on a more personal level. Use team building games that give you the chance to find out what your team members value and how you can better motivate them to be their best.

3) He takes into account the situation he is in

Tyrion always has an acute sense of the situation he is in, and he can read a room very quickly. For instance, when he was imprisoned in the Vale, he attempted to negotiate with Mord, the guard, to relay a message to Lady Arryn.

In the video clip, you can see that he appeals to Mord’s greed by offering a monetary reward (a skill that we’ll talk about next!), but quickly realizes that he was using language that was too verbose. So he simplifies his language so that his message (“I will owe you gold!”) is more easily understood.

Tyrion is able to quickly size up the situation he is in, adapt, and make the most out of it.

Lannister Leadership Lesson: It’s easy to be a leader when things go according to plan; the challenge is when things go wrong. That’s the real test of your leadership! The ability to adapt to new information and be flexible about your approach to success is an important skill to have.

How can you improve your adaptability? It’s said that you first have to learn the rules before you can break them; a similar idea works when it comes to adapting to a changing situation. Ensure that you have a full grasp of the situation and enough information to make a good decision at that moment in time. Be ready for any consequences that arise from your decision and be willing to adjust the sails when necessary so that you can stay on course.

4) He uses words in a purposeful manner

Tyrion is known for his wit and one-liners, but one of his most memorable moments occurred at the Battle of Blackwater. King’s Landing is about to be besieged by Stannis Baratheon’s army and King Joffrey has run away from his responsibilities, leaving Tyrion no choice but to lead the army. These are men who despise him and don’t believe in his leadership, yet he manages to win them over. His inspiring words connect directly with the soldiers’ personal motivations and fire them up for battle.

In almost all his interactions with other key characters, Tyrion uses his words carefully and purposefully, whether it is to inspire, wound, anger or prod the other person. He knows the power of words and wields them as effectively as a sword of Valyrian steel.

Lannister Leadership Lesson: Words have tremendous power, so use them intentionally! Take a moment to gather your thoughts before you speak, whether it’s to your peers, subordinates or clients. Using clear, direct language helps to minimize misunderstandings.

Adapt your message to the audience and the context. Every audience has different needs so speak in a way that appeals to them. You could have a great idea, but if you’re unable to communicate it effectively to your team, you can’t inspire or motivate them.

“I have my mind.. and a mind needs books like a sword needs a whetstone.”

While Jamie has his sword and prowess as a knight and Cersei has her beauty, Tyrion has his mind. And the way to sharpen his weapon is through constantly educating himself. He does this through books and gathering information.

Tyrion values book knowledge, knowledge about the (political) landscape and knowledge about people. He uses all three types in tandem to evaluate a situation and make educated guesses and calculated risks.

Lannister Leadership Lesson: Never stop learning. As a leader, it’s necessary to keep upgrading your personal toolkit; sign up for seminars, go for training courses, learn from other leaders you admire. And be like Tyrion and devour books. There are numerous leadership books out there that can help you become a better leader. As they say, knowledge is power!

As Hand of the King, Tyrion sees the negative effects of King Joffrey’s impetuous and vicious nature. He tries his best to be diplomatic but — in a move that made every GoT fan cheer (come on, don’t deny you let out a little whoop of delight!) — he calls out Joffrey’s foolish actions and slapped him. (GO TYRION!)

Similarly, as advisor to Daenerys, Tyrion provides her with a realistic view of the politics in King’s Landing:

Acknowledge any mistakes made or any wrong decisions, take responsibility for those choices and then make the necessary adjustments to improve the situation. It’s best to deal with things as they are, instead of pushing bad things under the rug.

7) He uses the power of persuasion/negotiation

Tyrion is aware of how being an excellent negotiator can shift the balance of power into his hands. His persuasive skills are a consolidation of his other admirable qualities: the ability to read people and situations, his sharp wit, and his ability to use speech to win people over.

The scene where Tyrion tries to convince Bronn to be his champion in his trial-by-combat for allegedly murdering King Joffrey is a great example of how good he is at persuasion (even if Bronn did turn him down!).

Charisma on Command has this awesome video that breaks down how Tyrion is able to reframe situations so that he has the upper hand even if he’s in an inferior position:

Lannister Leadership Lesson: As a leader, knowing how to negotiate and persuade is one of the most important weapons in your arsenal. It allows you to resolve conflicts more easily, and teaches you to win situations not through defeating others but through winning them to your side.

Persuasion can be more effective than brute force! Use logical arguments, facts and solid reasoning to move people to your position by convincing them it’s in their interest as well as yours. When others understand and accept your point of view they follow you more readily.

So there you have it, 7 reasons why we think Tyrion is the most awesome Lannister (… even though we admit we did love to hate Tywin and his evil machinations. RIP Daddy Lannister!). The combination of Tyrion’s self-knowledge, his ability to adapt in challenging situations and his skill of influencing others makes him a major player in the quest for the Iron Throne. 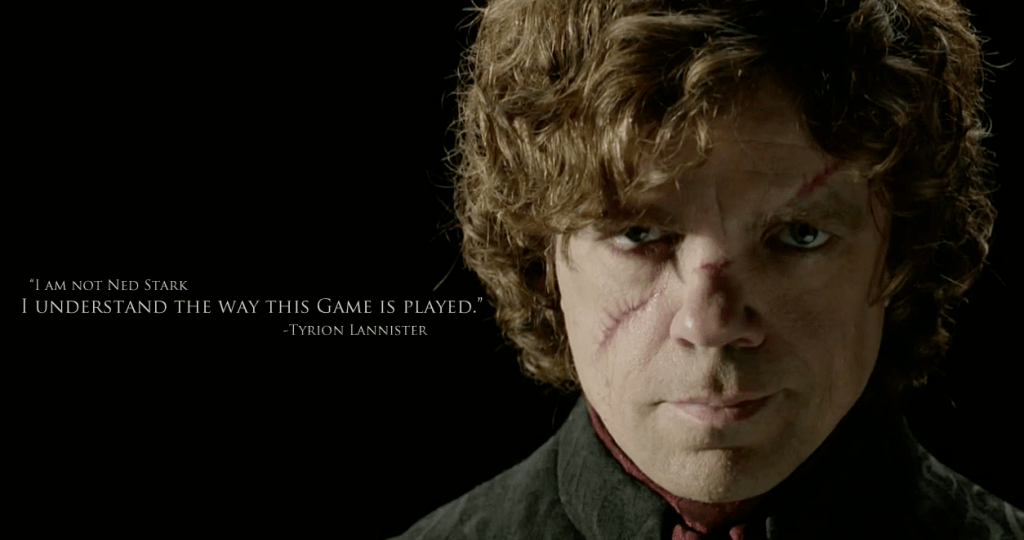 Are you also on the Imp’s side? Who do you think will take the Iron Throne? Let us know in the comments! 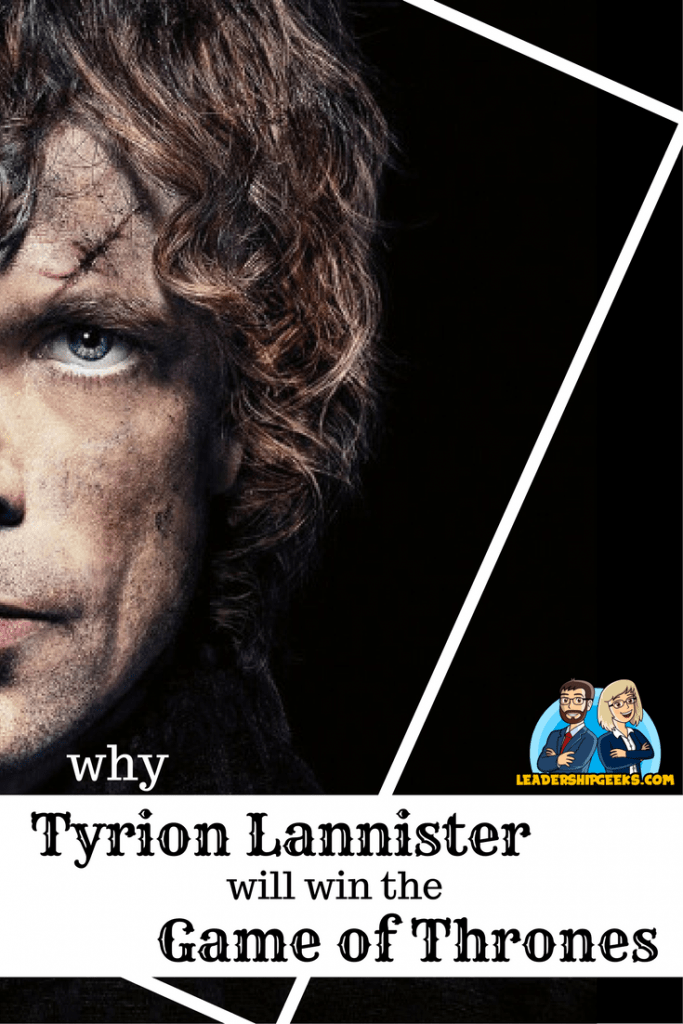