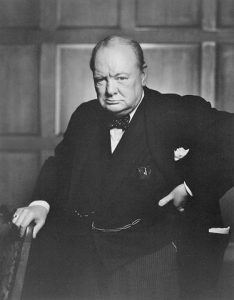 Sir Winston Churchill was a British political leader known for his leadership of the United Kingdom during World War II. He was the man who gave hope to Britain during the darkest days of World War II, and was instrumental in turning the tide of battle against the Axis Forces in Europe.

Winston Churchill was born on November 30th, 1874 to the family of the Dukes of Marlborough. His father, Lord Randolph Churchill, was the third son of the 7th Duke of Marlborough; he was a politician who married an American heiress.

As a child, Churchill hated school and did not do well academically, although he did develop a love for the English language. After graduating from Harrow, he applied to the Royal Military College, Sandhurst. He was finally accepted after three failed applications, and graduated in December of 1894.

Before playing a pivotal role in World War II as Prime Minister, Winston Churchill had a long career in the military, starting with the cavalry in 1895. His time in the military took him to many countries including Cuba, Sudan and South Africa and he experienced both successes and failures. During this period, he also worked as a war correspondent for several newspapers and wrote books about his military campaigns.

Churchill’s career as a politician started when he won the seat at Oldham in 1900. He experienced some early success in the political arena. One of his achievements was the passing of the People’s Budget which taxed the rich and provided funding for social welfare programs.

His political career had its ups and downs, from his post as Chancellor of the Exchequer in 1927 to his exile from the political scene in 1931.

Churchill really began to shine when he returned to politics at the start of World War II. He was appointed First Lord of the Admiralty, and then was made Prime Minister when Neville Chamberlain stepped down. As Prime Minister, he led Britain in fighting back against the advancing Germans, in a time when most of Europe was under Axis control.

He spent 50 years in public service and served two terms as Prime Minister of the United Kingdom. Besides being a politician, Churchill was also an artist, historian and writer. His writing won him the Nobel Prize in Literature in 1953.

Here are some honours that Churchill was given:

In his youth, Churchill had a speech impediment which took several years to overcome. Churchill never accepted that he couldn’t overcome this obstacle and worked diligently to improve himself. In his later years he became a great public speaker, inspiring hope in millions through his speeches, and rallying many more during his political campaigns.

If you have a weakness in your personality or skillset, remember that it only takes perseverance and effort to overcome it. If you are afraid to speak to large crowds, you can take a training course to improve your public speaking. If you are afraid of conflict, you can learn conflict management techniques so that you are better equipped to deal with such situations.

Remember that it took Churchill time and effort to strengthen his weaknesses. Persevere and continue working to improve yourself!

2. Your words can have a great impact

During the darkest hours of World War II, Churchill’s speech rekindled the belief that Britain could win the war despite most of Europe being under the control of the Axis forces. Remember that Churchill had no hard facts or basis for his statement — it was his simple faith and inspiring words that moved a whole nation to fight back.

As a leader, remember that what you say to your team or organization can have an important impact. It can raise morale. It can inspire and motivate. It can instill courage to fight harder to reach your goals.

You too can become a leader who makes an impact — first by having faith in your vision, and then using the right words to instill that same faith in your team.

Churchill was always working on some aspect of himself, be it his writing, his oratory skills, or even his painting (he was an amateur painter). Although he was not formally educated beyond high school, Churchill nonetheless saw the importance of constant, self-directed learning. As a result of his self-education, he often looked at problems from a different perspective than his formally-educated colleagues.

In your own leadership journey, don’t forget the importance of continuous learning. Whether it’s reading the biographies of great leaders, practicing new presentation techniques, or studying new developments in your field, aim to learn something new every day.

Hero of the Empire: The Boer War, a Daring Escape, and the Making of Winston Churchill

Winston Churchill firmly believed in his destiny to become a fearless leader of a nation, it was through epic accomplishments on the battlefield that he sought greatness. After a miraculous escape from imprisonment by the enemy forces, his incredible journey only began to unfold. 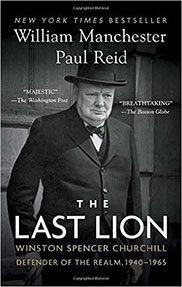 The Last Lion: Winston Spencer Churchill: Defender of the Realm, 1940-1965

The man who inspired an entire nation, in fact, the world to “never surrender” and prevail in the face of adversity; Winston Churchill stood his ground when it was needed the most. The Last Lion: Winston Spencer Churchill: Defender of the Realm, 1940-1965 brilliantly retells the final period of his dramatic career. 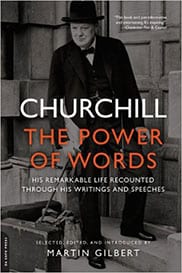 Churchill: The Power of Words

Rarely do someone’s words resonate so deeply with nations throughout the world, inspiring the generations to come. Winston Churchill knew just how much power a few words hold, and we hear their echo still to this day.

“All the great things are simple, and many can be expressed in a single word: freedom, justice, honor, duty, mercy, hope.”

“Attitude is a little thing that makes a big difference.”

“Courage is rightly esteemed the first of human qualities… because it is the quality which guarantees all others.”

“I am easily satisfied with the very best.”

“I have nothing to offer but blood, toil, tears and sweat.”

“If you are going through hell, keep going.”

“It is no use saying, ‘We are doing our best.’ You have got to succeed in doing what is necessary.”

“Success is going from failure to failure without a loss of enthusiasm.”

“Success is not final, failure is not fatal: it is the courage to continue that counts.”

“The price of greatness is responsibility.”

“We are masters of the unsaid words, but slaves of those we let slip out.”

“You have enemies? Good. That means you’ve stood up for something, sometime in your life.”

This video is about Winston Churchill’s speech to his people as he began to move and inspire them to fight back against the Germans, despite being in a seemingly hopeless situation.