Adolf Hitler was the head and leader of Nazi Germany who started the World War II. He was most known for his for his central leadership role in the rise of fascism in Europe, World War II and The Holocaust.

Disclaimer:  We all know Hitler was a bad guy. A really, really bad guy. This leadership study is for educational purposes, and we trust that you’ll use this information for good. 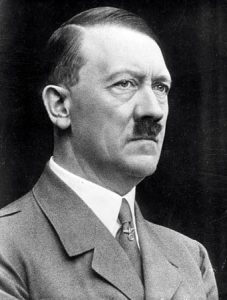 Hitler was born in an Inn in the Austrian-Hungary border as the fourth of six children to Alois Hitler and Klara Pölzl.

For his education, Hitler joined a Catholic school, joined the church choir and even thought of being a priest when he grew up.

His father had wishes for him to join a technical school, but Hitler was more interested in the arts. This led to many arguments, bitterness and rebellion on Hitler’s part. As a result, Hitler became pro-Germany as a statement of rebellion because his father served the Austrian government.

At age 28, he was rejected by the Vienna School of Fine Arts and then the architectural school, making fulfilling his dreams of becoming an artist to be physically impossible.

Hitler developed anti-Semitism in Vienna, being influenced by the culture and the beliefs in a large way which would later bring about the horror of the Holocaust.

Hitler participated in World War I and was decorated twice for bravery. Yet he was never promoted because his leaders thought he lacked leadership abilities.

Hitler had long admired Germany and it was during the World War I that he truly became a patriot of Germany.

His rise to power came when he participated in politics after World War I. He was inserted as a spy into the German Worker’s Party (DAP), but he was impressed with the ideology of the founder Anton Drexler. The founder, who was impressed with Hitler’s oratory skills, hired him as a Party member.

Before long, he seized full control of the Party as the members of the Party realized that they couldn’t do without him because of his effectiveness in speaking to large crowds. He became the Führer of the National Socialist German Workers’ Party in 1921.

He staged an unsuccessful coup known as the Beer Hall Putsch where he tried to declare a new government by demand support from the local military at gunpoint. The police managed to stop his attempt and he almost committed suicide after running from them.

Hitler was then given unlimited time to defend himself in public. Because he was such a good speaker, he managed to rouse more national sympathy for his cause and he became more popular than ever. He ended up only serving a short time in jail.

His breakthrough came during the Great Depression, where he managed to rouse the national’s bitterness for having the pay for the cost of the war in World War I. Through a series of political plays, he was appointed Chancellor by the government in January 1933.

As Chancellor, he further secured additional power by closing down opposition parties and securing unlimited rights for himself.

Having secured supreme political power, Hitler went on to gain public support by convincing most Germans he was their savior from the economic Depression, the Versailles treaty, communism and more.

Eventually, his greed and ambition led to the initial invasion of Poland and resulting in the World War II.

Adolf Hitler did much evil during his regime in Nazi Germany. Although I do not share his values, but he did do certain things right as a leader to rally a whole nation. Here are some positive lessons that you can pick up from him:

Hitler was a captivating public speaker. He would enrapture crowds with his vision and sense of purpose of the nation. His words moved a country, even the church to believe that they were killing in the name of God. That was the extent of his charisma.

While Hitler was a great orator, and that contributed to his ability to capture his audience, it was his deep belief in what he was doing that moved the nation. He gave his nation a new purpose and destiny and they were willing to follow him for it.

As a leader, the strength of your conviction will often determine how far your followers are willing to go through with it together with you.

Adolf Hitler understood human nature very well. He knew how to use human nature to his personal gain and with that knowledge, he rallied the whole nation behind him.

You have to understand the thoughts, inclinations of human nature well if you are to be an effective leader as well. This often means a high level of emotional intelligence. Much of human nature can be easily be seen in yourself; especially in your weakness to temptation or any base inclination.

You don’t have to study psychology or take a course in human nature to understand them. Often your life experiences might already give you a good clue as to how people behave and how to motivate people.

Adolf Hitler successfully used propaganda to bring the whole nation under his influence Through the constant use of media and communications, he managed to cause a whole nation to think alike to serve his cause.

As the propaganda minister in Nazi Germany, Joseph Goebbels says, “If you repeat a lie often enough, people will believe it, and you will even come to believe it yourself.” (This quote may have been misattributed to him, but the point is there.)

There’s a lesson for us leaders to be learnt here. People become what they are constantly being exposed to. If you constantly read, watch and listen to positive messages, you’ll naturally become positive. And it works vice versa as well.

We’d like to think that we are thinking independently of our environment, but the truth is that most of us think, act and believe in a certain way as a result of several unconscious cues from our environment.

What is the underlying message you portray to your team each day? The words you speak, the actions you take often have either a positive or negative influence on your team.

Was it an ambitious pamphlet criticizing the dominant political parties in Germany, or a book aimed at indoctrinating hatred and malevolence? How did a single piece of writing become the blueprint for a horrible slaughter the world had never seen before? 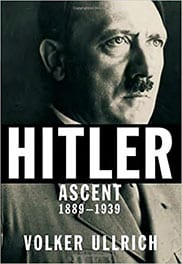 Volker Ullrich masterfully uncovers the face of evil, unravelling the layers of ambition, talent, and ruthlessness behind Adolf Hitler. 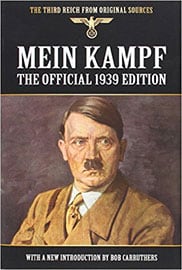 This astounding translation of the original Mein Kampf brings us closer to the first text that only later on became one of the most popularized writings of the time. This version of translation is lauded as the “people’s edition” compared to other previous translations.

All propaganda has to be popular and has to accommodate itself to the comprehension of the least intelligent of those whom it seeks to reach.

He alone, who owns the youth, gains the future.

How fortunate for governments that the people they administer don’t think.

If you tell a big enough lie and tell it frequently enough, it will be believed.

It is always more difficult to fight against faith than against knowledge.

Anyone who sees and paints a sky green and fields blue ought to be sterilized.

I use emotion for the many and reserve reason for the few.

The leader of genius must have the ability to make different opponents appear as if they belonged to one category.

By the skillful and sustained use of propaganda, one can make a people see even heaven as hell or an extremely wretched life as paradise.

Demoralize the enemy from within by surprise, terror, sabotage, assassination. This is the war of the future.

Germany will either be a world power or will not be at all.

The doom of a nation can be averted only by a storm of flowing passion, but only those who are passionate themselves can arouse passion in others.

The great masses of the people will more easily fall victims to a big lie than to a small one.

Strength lies not in defence but in attack.

The art of leadership… consists in consolidating the attention of the people against a single adversary and taking care that nothing will split up that attention.

Hate is more lasting than dislike.

Sooner will a camel pass through a needle’s eye than a great man be “discovered” by an election.

The victor will never be asked if he told the truth.

Those who want to live, let them fight, and those who do not want to fight in this world of eternal struggle do not deserve to live.