Billy Graham is one of the top preachers and evangelists of the 20th century. Throughout his crusades all over the world, it is estimated he has led over 2.5 million souls to Jesus Christ. He is also a pastor to many U.S Presidents. To date, he has had personal audiences with 12 US Presidents, whom spoke and sought counsel from him.

Billy Graham was born in 1918 in a dairy farm in North Carolina. 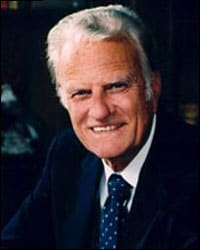 From a very young age, he had an aversion to alcohol and drugs because his father once forced he and his sister to down a huge amount of it, causing them to vomit.

At 16 years of age, he converted to Christianity in a series of revival meetings in Charlotte, North Carolina.

After a series of negative encounters with Christians in his earlier days, he finally accepted the Bible as the infallible Word of God in 1943 during his time in Wheaton College.

He joined Youth for Christ International as their first full time evangelist and this marked the beginning of his preaching career. He would set up large circus tents as he travelled and preached, and during that time, he became a national religious figure.

In 1950, Billy Graham founded the Billy Graham Evangelistic Association which included subsidiaries like a radio station, a Christian publication, a website and a film making company.

Billy Graham was a huge success as an evangelist, having had audiences with 12 US Presidents as well as having his name known even in the secular world.

He would retire in the early 2000s because of his failing health. After then, he would only make rare appearances at a few large scale events.

In his life, Billy Graham has preached Christianity to live audiences of nearly 215 million people in more than 185 countries and territories through various meetings, and has reached hundreds of millions more through television, video, film, and webcasts.

Billy Graham has received many awards and honors, including:

Billy Graham was a preacher, so anyone who listens to him will received one of his many life messages. Here are just two that I would like to point out:

1.Work with your gifts

Billy Graham had the gift of speaking, as pointed out by one of his mentors. He began developing the gift by spending a lot of his time preaching and evangelizing, and eventually he became one of the best preachers in the world.

I believe that everyone needs a level of self-awareness about their talents and abilities. As a leader, this is even more important because you serve your team or organization best when your giftings are being used and brought to their fullest potential.

Do you speak well? Are you a good organizer? Do you relate to people well? All these are good questions you should ask yourself. Find space for these talents to come out so that you can stand out as a leader in your field.

Billy Graham was a strong believer in the attitude of the heart. A man can pray with arrogance, or said he loves the Lord without giving a single cent to Him, but Graham believed that through action, one could see attitudes of the heart.

The attitudes of the heart are the most important factor you should consider as a leader. A capable person who has only self-interest will never be as a trustworthy as an average person with pure intentions.

While most people look at the outward appearance: how good the person looks; how well this person speaks and dresses up, Billy Graham emphasized on the importance of looking at a person’s attitude.

In order to choose the right people, you need discernment to see beyond the surface. 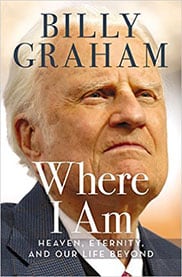 Where I Am: Heaven, Eternity, and Our Life Beyond

The man who instilled hope, faith and love into the hearts of millions shares his innermost thoughts and examines the reality of our life and what comes after it. 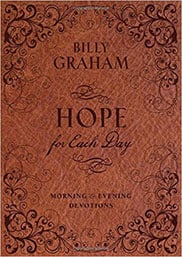 Hope for Each Day Morning and Evening Devotions

Billy Graham’s blueprint for a spiritually fulfilled life. Get closer to God with each day, following these inspirational devotionals. 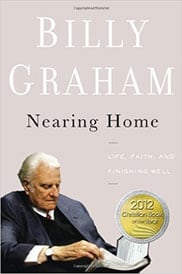 As Billy Graham grew older, he discovered more layers of faith reaching out from within. Now, he invites us to grow older with him, get wiser and reach the end of journey with grace.

A child who is allowed to be disrespectful to his parents will not have true respect for anyone.

Only God Himself fully appreciates the influence of a Christian mother in the molding of character in her children.

Prayer is simply a two-way conversation between you and God.

Being a Christian is more than just an instantaneous conversion – it is a daily process whereby you grow to be more and more like Christ.

God is more interested in your future and your relationships than you are.

God proved His love on the Cross. When Christ hung, and bled, and died, it was God saying to the world, “I love you.”

Believers, look up – take courage. The angels are nearer than you think.

Comfort and prosperity have never enriched the world as much as adversity has.

If a person gets his attitude toward money straight, it will help straighten out almost every other area in his life.

It is not the body’s posture, but the heart’s attitude that counts when we pray.

Courage is contagious. When a brave man takes a stand, the spines of others are often stiffened.

Give me five minutes with a person’s checkbook, and I will tell you where their heart is.

The word ‘romance,’ according to the dictionary, means excitement, adventure, and something extremely real. Romance should last a lifetime.

There is nothing wrong with men possessing riches. The wrong comes when riches possess men.

We are not cisterns made for hoarding, we are channels made for sharing.

I just want to lobby for God.

I’ve read the last page of the Bible. It’s all going to turn out all right.

God has given us two hands, one to receive with and the other to give with.

Man has two great spiritual needs. One is for forgiveness. The other is for goodness.

My home is in Heaven. I’m just traveling through this world.

The Christian life is not a constant high. I have my moments of deep discouragement. I have to go to God in prayer with tears in my eyes, and say, ‘O God, forgive me,’ or ‘Help me.’

The highest form of worship is the worship of unselfish Christian service. The greatest form of praise is the sound of consecrated feet seeking out the lost and helpless.

Nothing can bring a real sense of security into the home except true love.

Read the Bible. Work hard and honestly. And don’t complain.

Suppose you could gain everything in the whole world, and lost your soul. Was it worth it?

The most eloquent prayer is the prayer through hands that heal and bless.

You’re born. You suffer. You die. Fortunately, there’s a loophole.

This is a Billy Graham crusade from 1957: