Anna Eleanor Roosevelt was born on October 11th 1884 to a prominent family in New York. She lost her parents and a younger brother when she was still a child, and was brought up in her grandmother’s household. She attended a finishing school in England for several years, where she gained self-confidence and learned to be an independent thinker. 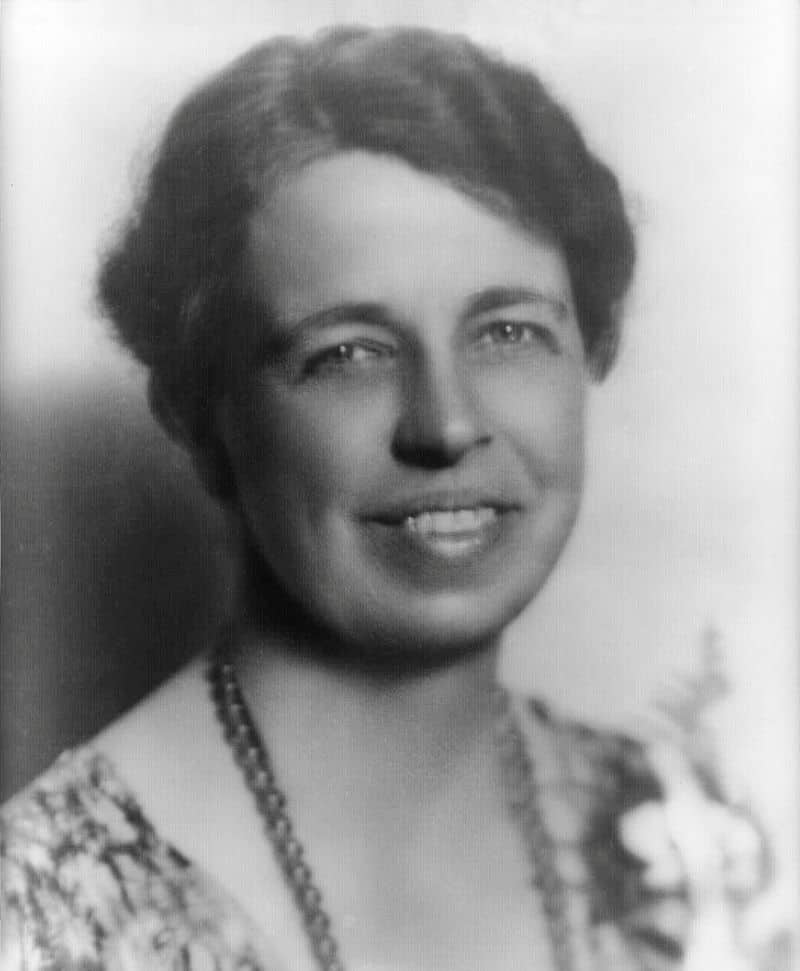 In 1902, she returned to America to make her social debut. A chance meeting on a train with a fifth cousin once removed, Franklin D Roosevelt, led to romance and the pair were married in March 1905 despite objections from Franklin’s mother. The difficult relationship between Franklin’s mother and Eleanor continued to plague the couple throughout their marriage.

Eleanor’s discovery in 1918 that her husband was cheating on her with her social secretary spurred her to seek a more active role in public life. Due to political expediency and pressure from Franklin’s mother, the couple remained married; however, their relationship became more of a political partnership. When Franklin was diagnosed with polio in 1921, it was Eleanor who convinced him to ignore his mother’s dictate to retire to a quiet country life and remain in politics.

Franklin became the President of the United States in 1933, making Eleanor the First Lady. Initially, Eleanor was disenchanted with the traditional domestic role of the position she found herself in. With her husband’s support, she began to redefine and enlarge the role of the First Lady by becoming more involved in political and civic duties.

Among other duties, she took on speaking engagements, wrote a daily newspaper column, and attended labor meetings in her husband’s place. In 1940, Eleanor became the first presidential spouse to speak at a national party convention. She was also a strong proponent of the American Civil Rights Movement, and supported women’s issues and the empowerment of women.

After Franklin’s death in 1945, Eleanor continued in public service when she was appointed by President Truman as a delegate to the United Nations General Assembly. As a supporter of human rights, she played a pivotal role in drafting the Universal Declaration of Human Rights which was eventually adopted by the UN in 1948. She also continued to write; over her lifetime, she authored 2 books and more than 8,000 columns.

Eleanor died in 1962 due to heart failure. She is still much admired for reinventing the role of First Lady and her numerous contributions to political and social causes.

1. Define your own role as a leader

Upon becoming First Lady, Eleanor didn’t change herself in order to fit the mold; instead, she defined the position on her own terms. She transformed the traditional limited role of a First Lady as a hostess into one that was more actively involved in her spouse’s administration. Part of the change was to suit her own personality and ambitions, and part of it was done to accommodate her husband’s illness and limited mobility.

Regardless of the reasons, Eleanor enlarged the scope of duties of a First Lady and made it a more impactful role. Her legacy is seen in how the First Ladies who came after her (such as Rosalynn Carter, Hillary Clinton and Michelle Obama) have become highly involved in public life during their tenures.

Think of how you can define the role of a leader for yourself. What can you do differently that would have a larger impact? How can you better use your skills and experience to lead your team and achieve your goals? Don’t let what your predecessor did or the established limits of your role stop you from maximising your impact as a leader.

2. Use your position to advance your goals

Eleanor very wisely used the formal authority of her position to fight for what she believed in. She saw the position of First Lady as a channel to expand on the work she was already passionate about.

For instance, to support the empowerment of women, she instituted a women-only rule for her press conferences. This forced the newspapers of the day to keep female reporters on staff so they could cover those events.

Are you using your position as a leader in a meaningful way? To become a leader that is respected and admired, stand up for beliefs and causes that are important to you, and use your position in a positive way to bring about change.

3. Mentors are important to your growth

As a teenager, Eleanor spent time at a private English finishing school run by Marie Souvestre who was known for cultivating independent thinking in the young girls she taught. Her 3 years there bolstered her self-confidence and shaped her into an independent thinking woman with intellectual curiosity and a passion for social justice.

After Eleanor left the school, she and Souvestre corresponded until Souvestre’s death in 1905. Souvestre’s influence and mentoring had a profound impact on Eleanor’s development as a young woman.

Having a mentor to guide and advise you can be invaluable to your growth as a leader. The best mentoring relationships develop organically so build relationships with other successful people whose work and character you admire. Connect with them, learn from them, and let their advice guide you in your quest to be a better leader. 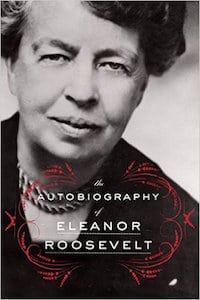 The Autobiography of Eleanor Roosevelt

First Lady, humanitarian, daughter of one of the most influential families, civil rights fighter, outspoken leader and an activist, there are so many titles to be associated with Eleanor Roosevelt and her astonishing lifework. This autobiography allows us to peer into the world of one of the most remarkable female figures in American history, reliving some of the crucial moments in American history through her own words. 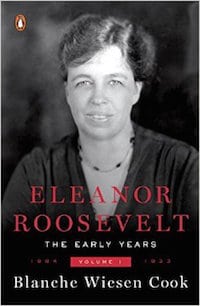 This candid and insightful portrait of a woman who greatly influenced the twentieth century America brings us closer to the captivating life of Eleanor Roosevelt. Through hardships and debilitating struggles she managed to overcome all of the challenges and rise up to become a strong political leader, making some true changes in the world. 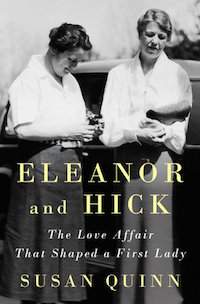 Eleanor and Hick: The Love Affair That Shaped a First Lady

This dual biography recounts the lives of Eleanor Roosevelt and Lorena Hickok, two women whose 30-year relationship significantly altered their path in life, as well as the path of many others. It is a true testimony of how love can grow and overcome all the barriers, inspiring both women to make some historic decisions. 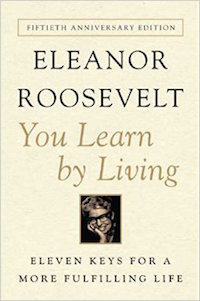 You Learn by Living: Eleven Keys for a More Fulfilling Life

How can we change our own lives and be our best selves?  Eleanor shares her own journey to becoming her best self, and offers some advice on how we might do the same. 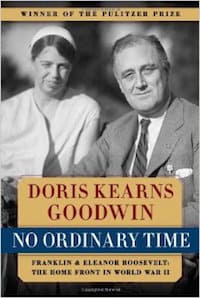 A fascinating history of two remarkable people during the war, this book won the Pulitzer Prize for History writing.

“No one can make you feel inferior without your consent.”

“You must do the things you think you cannot do.”

“The future belongs to those who believe in the beauty of their dreams.”

“You gain strength, courage, and confidence by every experience in which you really stop to look fear in the face. You are able to say to yourself, ‘I lived through this horror. I can take the next thing that comes along.’”

“In the long run, we shape our lives, and we shape ourselves. The process never ends until we die. And the choices we make are ultimately our own responsibility.”

“It is not fair to ask of others what you are not willing to do yourself.”

“Life must be lived and curiosity kept alive. One must never, for any reason, turn his back of life.”

“You can often change your circumstances by changing your attitude.”

“Happiness is not a goal; it is a by-product.”