George Smith Patton, Jr. was a United States Army officer best known for his leadership as a general during World War II.
In WWII, he successfully defeated Nazi Germany on many battle fronts through his unique blitzkrieg military strategies.

George S Patton was born in 1885, California . He was born into a lineage of military leaders; many of his ancestors have stood in top military leadership positions. Not surprisingly, he had an interest in the military from a very young age.

In his early years, he attended Virginia Military Institute for one year. He then left VMI and enrolled in the United States Military Academy.

George S Patton’s first military assignment was the Punitive expedition into Mexico in 1916, where he successfully killed two top Mexican leaders in retaliation of an attack.

He would be involved in WWI as well as a captain leading a small regiment of tanks. He was injured in World War I and was awarded the Purple Heart.

After the World War, he came up with several new strategies and tactics for the use of armored vehicles, but to the rejection by the top commanders in the military. He also prophetically wrote a defense plan anticipating an air raid against Pearl Harbor—10 years before the attack by the Imperial Japanese Navy.

It was also during these inter-war years that George S Patton would become acquainted with Dwight D Eisenhower, which would later play a huge part in his life during the Second World War.

George S Patton’s military prowess was truly shown during the Second World War. During his South Africa campaign, he greatly impressed the Sultan of Morocco with his military tactics.

In his European campaign, he constantly defeated and surprised the Germans with his military prowess, and covered huge expanse of land in just a short period of time.

His greatest military achievement came in the Battle of the Bulge, where his logistical genius had helped him turn around his main forces to drive back the German’s final counter-offensive.

On December 9, 1945, Patton was severely injured in a road accident. He was rushed to a hospital where quadriplegia was diagnosed. Patton died of a pulmonary embolism on December 21, 1945.

George S Patton has received many military and civilian honors for his courageous war efforts, including:

George S Patton exemplifies courage in his military strategies. Fear leads to paralysis in anybody, including leaders. Patton overcame his fear of the German army by making decisive, swift actions that surprised and crushed the enemy.

Decisiveness and action in the face of uncertain and perilous situations will make you and outstanding leader. Where others are paralyzed by fear or uncertainty, making a decision to give your team a direction to focus will provide them much needed leadership in that moment.

During the Second World War, it was his implementation of discipline through the ranks of the soldiers that turned the morale of the soldiers around. He implemented strict rules like wearing helmets at all times, and making sure every soldier shaved.

Although these things did got gain him popularity, it gained him respect and his men began to trust him.

Instilling discipline might mean that your followers might not like you; because it seems you’re making life hard for them, but they will begin to respect you if you practice what you preach.

In the same way George S Patton’s regimental methods of discipline turned the tide of battle for the Allies, having discipline in your organization will ensure that everyone becomes successful and productive as well.

War As I Knew It

Experience the horrors, triumphs, tragedies, victories and heart-breaking stories from World War II as seen from the perspective of one of the pivotal figures in the conflict: George S. Patton. 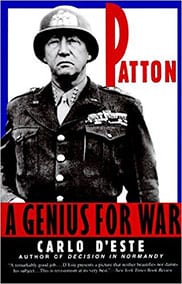 Patton: Genius for War, A

This detailed, yet enthralling biography by Carlo D’Este brings us an extraordinary look into the life of the American general who left his mark on the history of the world. 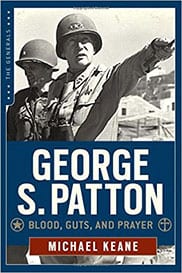 A true general and a passionate leader until the very end, George S. Patton inspired bravery and virtue in his men. Behind this immense military figure was a man of passion, ambition and faith.

Always do everything you ask of those you command.

If we take the generally accepted definition of bravery as a quality which knows no fear, I have never seen a brave man. All men are frightened. The more intelligent they are, the more they are frightened.

Watch what people are cynical about, and one can often discover what they lack.

You need to overcome the tug of people against you as you reach for high goals.

Battle is the most magnificent competition in which a human being can indulge. It brings out all that is best; it removes all that is base. All men are afraid in battle. The coward is the one who lets his fear overcome his sense of duty. Duty is the essence of manhood.

A good plan violently executed now is better than a perfect plan executed next week.

The test of success is not what you do when you are on top. Success is how high you bounce when you hit bottom.

A pint of sweat, saves a gallon of blood.

If a man does his best, what else is there?

If everyone is thinking alike, then somebody isn’t thinking.

It is foolish and wrong to mourn the men who died. Rather we should thank God that such men lived.

Accept the challenges so that you can feel the exhilaration of victory.

Prepare for the unknown by studying how others in the past have coped with the unforeseeable and the unpredictable.

There is only one sort of discipline, perfect discipline.

Success is how high you bounce when you hit bottom.

Better to fight for something than live for nothing.

Courage is fear holding on a minute longer.

Never tell people how to do things. Tell them what to do and they will surprise you with their ingenuity.

Untutored courage is useless in the face of educated bullets.

Wars may be fought with weapons, but they are won by men. It is the spirit of men who follow and of the man who leads that gains the victory.

Take calculated risks. That is quite different from being rash.

The object of war is not to die for your country but to make the other bastard die for his.

A series on George S Patton’s leadership is featured in History Channel: