George Washington had prepared to retire as the President of the United States just after a term and the transcript for this speech was written.

However, George Washington was convinced by his colleagues that it was important that he stayed on for a 2nd term for the stability of the country.

At the end of the 2nd term, he revisited this letter, revised it and sent it out to be published.

In the letter, George Washington stresses the importance of religion and morality in America, and warns against making long term foreign rivalry or alliances with other nations.

To this day, this remains one of the most important documents in US history. 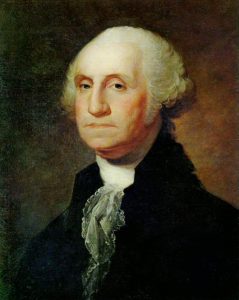 The period for a new election of a citizen, to administer the executive government of the United States, being not far distant, and the time actually arrived when your thoughts must be employed in designating the person who is to be clothed with that important trust, it appears to me proper, especially as it may conduce to a more distinct expression of the public voice, that I should now apprise you of the resolution I have formed, to decline being considered among the number of those out of whom a choice is to be made I have the consolation to believe that, while choice and prudence invite me to quit the political scene, patriotism does not forbid it.

A solicitude for your welfare which cannot end but with my life, and the apprehension of danger, natural to that solicitude, urge me, on an occasion like the present, to offer to your solemn contemplation, and to recommend to your frequent review, some sentiments which are the result of much reflection, of no inconsiderable observation, and which appear to me all-important to the permanency of your felicity as a people.

Interwoven as is the love of liberty with every ligament of your hearts, no recommendation of mine is necessary to fortify or confirm the attachment.

The unity of government which constitutes you one people, is also now dear to you. It is justly so; for it is a main pillar in the edifice of your real independence, the support of your tranquillity at home, your peace abroad; of your safety; of your prosperity; of that very liberty, which you so highly prize… Citizens, by birth or choice, of a common country, that country has a right to concentrate your affections. The name of American, which belongs to you, in your national capacity, must always exalt the just pride of patriotism, more than any appellation derived from local discriminations. With slight shades of difference, you have the same religion, manners, habits, and political principles. You have in a common cause fought and triumphed together; the independence and liberty you possess are the work of joint counsels, and joint efforts, of common dangers, sufferings, and successes.

But these considerations, however powerfully they address themselves to your sensibility, are greatly outweighed by those, which apply more immediately to your interest. Here every portion of our country finds the most commanding motives for carefully guarding and preserving the Union of the whole your union ought to be considered as a main prop of your liberty, and that the love of the one ought to endear to you the preservation of the other.

Observe good faith and justice towards all nations; cultivate peace and harmony with all. Religion and morality enjoin this conduct; and can it be, that good policy does not equally enjoin it? It will be worthy of a free, enlightened, and, at no distant period, a great nation, to give to mankind the magnanimous and too novel example of a people always guided by an exalted justice and benevolence. Who can doubt, that, in the course of time and things, the fruits of such a plan would richly repay any temporary advantages which might be lost by a steady adherence to it? Can it be that Providence has not connected the permanent felicity of a nation with its virtue? The experiment, at least, is recommended by every sentiment which ennobles human nature. Alas! It is rendered impossible by its vices?

A passionate attachment of one nation for another produces a variety of evils. Sympathy for the favourite nation, facilitating the illusion of an imaginary common interest, in cases where no real common interest exists, and infusing into one the enmities of the other, betrays the former into a participation in the quarrels and wars of the latter without adequate inducement or justification.

It leads also to concessions to the favourite nation of privileges denied to others, which is apt doubly to injure the nation making the concessions; by unnecessarily parting with what ought to have been retained; and by exciting jealousy, ill-will, and a disposition to retaliate, in the parties from whom equal privileges are withheld. And it gives to ambitious, corrupted, or deluded citizens (who devote themselves to the favourite nation) facility to betray or sacrifice the interests of their own country, without odium, sometimes even with popularity; gilding, with the appearances of a virtuous sense of obligation, a commendable deference for public opinion, or a laudable zeal for public good, the base or foolish compliances of ambition, corruption, or infatuation against the insidious wiles of foreign influence (I conjure you to believe me, fellow-citizens,) the jealousy of a free people ought to be constantly awake; since history and experience prove, that foreign influence is one of the most baneful foes of republican government.

But that jealousy, to be useful, must be impartial; else it becomes the instrument of the very influence to be avoided, instead of a defence against it. Excessive partiality for one foreign nation, and excessive dislike of another, cause those whom they actuate to see danger only on one side, and serve to veil and even second the arts of influence on the other. Real patriots, who may resist the intrigues of the favourite, are liable to become suspected and odious; while its tools and dupes usurp the applause and confidence of the people, to surrender their interests.

The great rule of conduct for us, in regard to foreign nations, is, in extending our commercial relations, to have with them as little political connection as possible. So far as we have already formed engagements, let them be fulfilled with perfect good faith. Here let us stop.

Europe has a set of primary interests, which to us have none, or a very remote relation. Hence she must be engaged in frequent controversies, the causes of which are essentially foreign to our concerns. Hence, therefore, it must be unwise in us to implicate ourselves, by artificial ties, in the ordinary vicissitudes of her politics, or the ordinary combinations and collisions of her friendships or enmities.

Our detached and distant situation invites and enables us to pursue a different course. If we remain one people, under an efficient government, the period is not far off, when we may defy material injury from external annoyance; when we may take such an attitude as will cause the neutrality, we may at any time resolve upon, to be scrupulously respected; when belligerent nations, under the impossibility of making acquisitions upon us, will not lightly hazard the giving us provocation; when we may choose peace or war, as our interest, guided by justice, shall counsel.

Why forego the advantages of so peculiar a situation? Why quit our own to stand upon foreign ground? Why, by interweaving our destiny with that of any part of Europe, entangle our peace and prosperity in the toils of European ambition, rivalship, interest, humour or caprice?

It is our true policy to steer clear of permanent alliances with any portion of the foreign world; so far, I mean, as we are now at liberty to do it; for let me not be understood as capable of patronizing infidelity to existing engagements. I hold the maxim no less applicable to public than to private affairs, that honesty is always the best policy… Taking care always to keep ourselves, by suitable establishments, on a respectable defensive posture, we may safely trust to temporary alliances for extraordinary emergencies.

Though, in reviewing the incidents of my administration, I am unconscious of intentional error, I am nevertheless too sensible of my defects not to think it probable that I may have committed many errors. Whatever they may be, I fervently beseech the Almighty to avert or mitigate the evils to which they may tend. I shall also carry with me the hope, that my country will never cease to view them with indulgence; and that, after forty five years of my life dedicated to its service with an upright zeal, the faults of incompetent abilities will be consigned to oblivion, as myself must soon be to the mansions of rest.

Relying on its kindness in this as in other things, and actuated by that fervent love towards it, which is so natural to a man, who views in it the native soil of himself and his progenitors for several generations; I anticipate with pleasing expectation that retreat, in which I promise myself to realize, without alloy, the sweet enjoyment of partaking, in the midst of my fellow-citizens, the benign influence of good laws under a free government, the ever-favourite object of my heart, and the happy reward, as I trust, of our mutual cares, labours, and dangers.