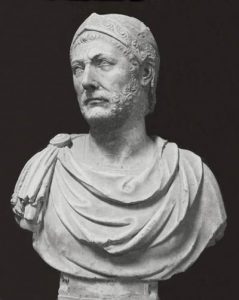 Hannibal Barca was a military commander of the Carthage army. He led a famous campaign in the second Punic War against the Roman army, where he remained undefeated until the gates of Rome. His most well-known military accomplishment was the battle of Cannae, where he defeated a Roman army double the size of his.

Hannibal Barca was born to Hamilcar Barca, the Carthaginian leader in 247 BC. His father was involved in the first Punic War where Carthage was defeated. At a very young age, he vowed he would use fire and steel to destroy the destiny of Rome.

At age 25, he began his campaign against the Roman Empire, which would take him away from home for 15 years. In 218 BC, he began his crossing of the Mediterranean.

He landed in modern day Spain and began his march toward Rome. By the time he reached Gaul, he had about 40,000 foot soldiers and 12,000 horsemen. His most daring feat, to the shock of the Roman Empire, was the crossing of the Alps with his army. During this perilous journey, Hannibal lost about a third of his soldiers.

Hannibal was an ingenious and cunning military commander, outsmarting the Romans several times, and he remained undefeated until reaching the very gates of Rome.

His most famous victory was the Battle of Cannae, where his army, although half the size of the Romans, slaughtered over 70,000 elite troops of the Roman Empire and took over 10,000 of them as prisoners.

However, his campaign took a turn when he decided not to attack Rome. Eventually he was called back to Carthage to defend against the invading Romans, and there he experienced a decisive defeat by the Roman commander Scipio.

A few years after a peace treaty was signed between Rome and Carthage, he went into exile. To elude capture by the Romans, Hannibal took his own life at 65 years old.

Although Hannibal was only at an age of 25 when he led his first and last military campaign, he successfully did so, despite having soldiers up to twice his age. How did he do it?

Hannibal was a man who led by example. He slept among his soldiers and would not wear anything that marked him as a leader or made him different from his soldiers. He led the armies into battle from the front and was the last to leave the battlefield.

Any leader who wishes to gain the respect and trust of his team can learn this from Hannibal. Whatever task you wish your team to do, make sure that you’re not just saying it, but doing it, and doing it better than everyone. This is the essence of leadership by example.

2. Have a grand vision

During the height of the Roman Empire, Hannibal had a vision of conquering Rome. Despite his young age, his vision captured the hearts and minds of his men, and most of them willingly followed him across the sea despite the seemingly overwhelming odds.

Having a big vision and learning to articulate it is important. People don’t just follow a leader, they follow a vision as well. Is your vision for your organization big enough to capture the hearts of your team?

For 15 years, Hannibal remained undefeated by the Romans, despite not receiving necessary reinforcements or support from Carthage.  How did he manage to stay in Italy so long without the support of his Carthaginian statesmen? Hannibal constantly enlisted the help and support of the Italian people around him, whose land he occupied. He managed to convince them that his war was not with them, but with the Roman State. He was so persuasive that some captured Roman prisoners even abandoned their allegiances to fight for Hannibal.

If you’re not getting the support you need for an initiative, you should ask yourself why. Are you not asking strongly enough? Or maybe you need to work on how you capture the hearts and minds of potential supporters. You might even look to your “enemies” to find an unexpected source of reinforcement! 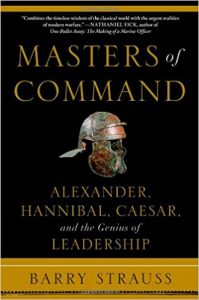 Masters of Command: Alexander, Hannibal, Caesar, and the Genius of Leadership

Redefining the differences between myth and reality, Barry Strauss compares and contrasts the strengths and weaknesses between three of the greatest generals of the ancient world. Alexander, Hannibal, and Caesar are names that have echoed throughout the history, and shall be remembered for all the generations to come. 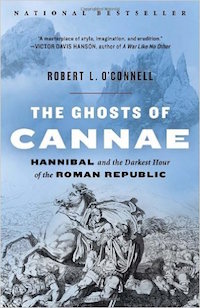 The Ghosts of Cannae: Hannibal and the Darkest Hour of the Roman Republic

Behind the most brutal, apocalyptic, and epic battle in history was one man. Featured in so many books, movies, and even memorial coins; Hannibal was a general like the world has never seen. This national bestsellerby Robert L. O’Connell tells the complete story behind his awe-inspiring life. 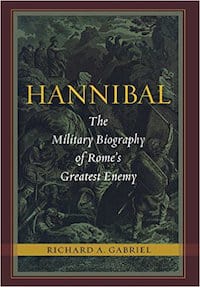 The greatest enemy Rome had ever faced; the only one who had ever come so close to shattering the Roman Empire. The mere mention of his name used to send shivers down the spines of any Roman. That man’s name is Hannibal. Read an in-depth biography about the man who used his ingenuity and unparalleled military skills to strike fear into the heart of Rome.

“I will either find a way, or make one.”

“The mirrors in your mind can reflect the best of yourself, not the worst of someone else.”

“Many things which nature makes difficult become easy to the man who uses his brains.”

“If you pay peanuts, you wind up hiring monkeys.”

“God has given to man no sharper spur to victory than contempt of death.”

“I am not carrying on a war of extermination against the Romans. I am contending for honor and empire. My ancestors yielded to Roman valor. I am endeavoring that others, in their turn, will be obliged to yield to my good fortune, and my valor.”