Howard Schultz is an American entrepreneur, known as driving force behind Starbucks Coffee Company. Through his own brand of transformational leadership, he grew Starbucks from a small Seattle company to a global coffee chain with over 23,000 outlets in 72 countries. He stepped down as CEO of Starbucks in April 2017, but remains executive chairman of the company. 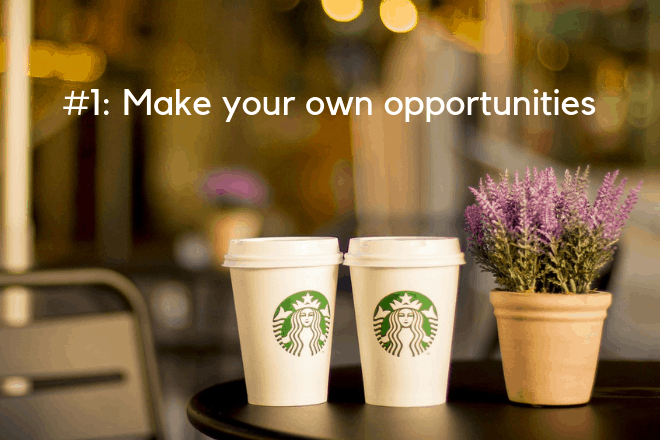 1. Make your own opportunities

“I believe life is a series of near misses. A lot of what we ascribe to luck is not luck at all. It’s seizing the day and accepting responsibility for your future. It’s seeing what other people don’t see. And pursuing that vision.”

Most people think that Schultz founded Starbucks, but that’s not true. What Schultz did do was turn Starbucks from a small Seattle company that sold roasted coffee beans to a global coffee chain. But even before that, Schultz’s journey to joining Starbucks shows his tenacity in creating his own opportunities. It took a year for him to convince the original Starbucks owners to hire him, yet he kept at it even after they initially rejected him.

Once he was on the Starbucks team, Schultz faced another huge hurdle when he suggested that the company should expand into the cafe business. He saw untapped potential and a gap in the market that Starbucks could fill — yet again, he faced rejection. Schultz was so convicted in his vision that he left Starbucks. After raising enough capital, he opened his own chain of coffee bars. This chain, Il Giornale, would eventually merge with the Starbucks brand after Schultz acquired it.

Schultz’s success can be attributed to his dogged pursuit of his vision; he was undeterred by closed doors and was tenacious enough to create his own opportunities. As a leader, do you let rejection stop you from achieving your goals? How committed are you to your goals, and how resourceful are you when things don’t go your way? 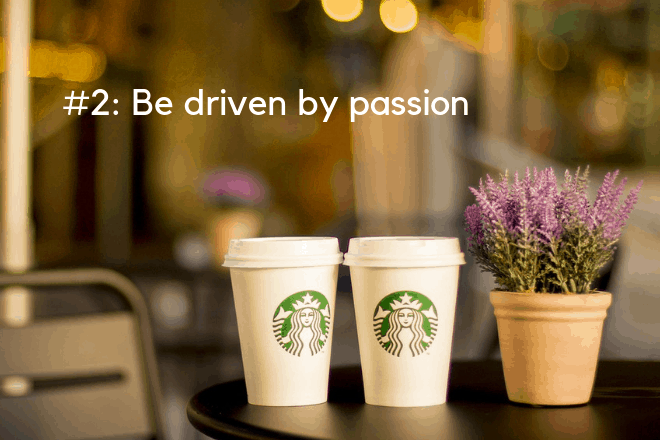 2. Be driven by passion

“Entrepreneurs must love what they do to such a degree that doing it is worth sacrifice and, at times, pain. But doing anything else, we think, would be unimaginable.”

The idea for Starbucks as a cafe was borne from a trip Schultz took to Milan, Italy. He had seen Italy’s coffee culture and how cafes there are a focal point for friends to get together and he wanted to replicate that feeling of community which was missing in the US cafe market at that time. Despite setbacks, he remained committed to his vision.

Starbucks is driven by Schultz’s passion for coffee and community. His second tenure as CEO in 2008 was motivated by his desire to realign operations to his initial vision of the company. He wanted to restore the integrity of the Starbucks brand, which he felt had eroded during its rapid growth.

What makes you excited to wake up every day and go to work? It’s important to know what drives you as a leader. What are your hopes and dreams? What impact do you hope to leave in the world? Find out what you will tirelessly work for, what goal you will sacrifice for because that’s what you should be doing in your life. 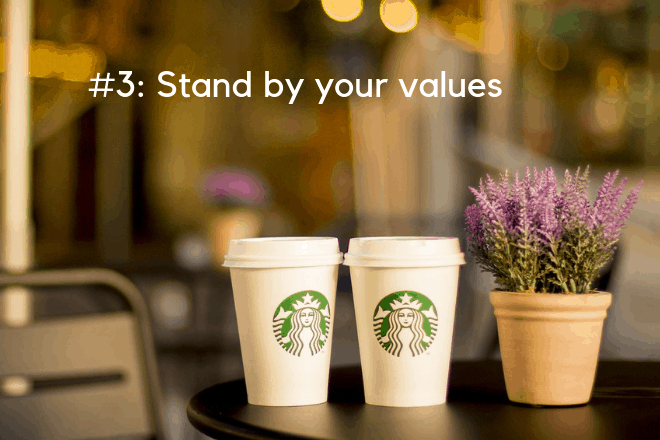 3. Stand by your values

“Coffee is what we sell as a product, but it’s not the business we’re in. We’re in the people business. I’m passionate about human connection.”

When Schultz was a young boy, his father got injured during his job as a truck driver. Without health insurance or any compensation, the injury meant that the Schultz family had no income. Schultz remembers how the incident caused his father to “[lose] his sense of dignity and self-respect. I am sure that this was caused mostly by the fact that he has been treated as an ordinary working man.”

This experience affected Schultz’s management style; one of his tenets of leadership is to treat people with respect. His own personal values are reflected in Starbuck’s company values.

A Short Biography of Howard Schultz

Howard Schultz was born on on July 19th 1963 in Brooklyn, New York. He came from a poor family, and he was the first in his family to go to college when he won an athletic scholarship to Northern Michigan University. In 1975, Schultz graduated with a bachelor’s degree in Communications.

He started his career as a sales representative for Xerox Corporation before moving on to Hammarplast, a Swedish company that manufactured drip coffee makers. It was during his time there that Schultz found out about Starbucks Coffee Company, which was a client of Hammarplast. Schultz was won over by their passion and knowledge of coffee, and joined Starbucks a year later as its retail operations and marketing director.

Inspiration struck on a buying trip to Milan where Schultz took note of Italian coffee culture — he wanted to introduce a similar cafe concept with the Starbucks brand. Although he did convince the Starbucks owners to try a pilot of the cafe concept (which was successful!), they were unwilling to branch out into the F&B business. This led to Schultz’s departure from Starbucks in 1985. He wanted to pursue the cafe idea, and a year later he launched his own chain of cafes, Il Giornale.

Il Giornale proved to be a success and two years later, Schultz bought Starbucks. Merging the two entities, he became the CEO and Chairman of the Starbucks Coffee Company and embarked on expanding the Starbucks chain across the United States. When Starbucks had its initial IPO in 1992, it had 140 outlets and earned an annual revenue of US$73.5 million.

Schultz stepped down as CEO in 2000 but returned to the helm in 2008. In his second term as CEO, Schultz was determined to restore the “distinctive Starbucks experience”, which was lost when the company aggressively expanded worldwide.

Schultz’s vision accelerated the second wave coffee culture, and paved the way for more coffee establishments to emerge. As of June 2016, Starbucks has over 23,000 outlets in 72 countries worldwide. Schultz has built Starbucks into a US$85 billion business, with the company expanding into offering food, tea and becoming one of the first to introduce mobile ordering. What’s more, he put in place programs to care for his employees, such as expanding healthcare coverage and an employee stock purchase program.

Schultz may have stepped down as CEO of Starbucks in April 2017, but his vision of Starbucks as a business that is connected to the community continues to guide the company.

Watch this interview with Howard Schultz to learn more about his business philosophy: