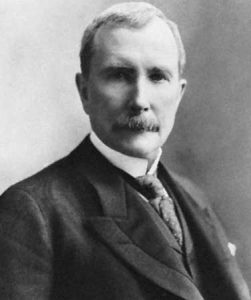 John D Rockefeller was an American oil magnate and the first billionaire in the history of the world. In today’s dollars, Rockefeller is still considered the richest man in modern history. He was also one of the first major American philanthropists, giving back a huge portion of his wealth to the community.

John D Rockefeller was born in 1839 in New York to Bill and Eliza Rockefeller. From a very young age, he was taught by his father to be shrewd and cunning in every deal. His mother was a fervent Baptist and tried to instill in him the importance of being a good Christian.

As he grew up, he developed a love for music, which at some point he considered as a career. Later on, he found that he loved bookkeeping, and became an assistant bookkeeper at the age of 16.

At age 20, he started a business with a partner dealing in wholesale foods. His next business venture was an oil refinery, which benefitted from excellent timing. The need for crude oil grew during that period as whale oil became more scarce and expensive.This was the beginning of his journey that would eventually make him the world’s richest man.

His many acquisition deals and horizontal integration eventually led to legal troubles. Rockefeller faced numerous lawsuits, as many argued that his practices were monopolistic and unfair.

Rockefeller retired at age 63 and spent much of his time and money giving back to society. For instance, he provided funding for the University of Chicago and medical research which led to cures for yellow fever and hookworm.

The lawsuits came to a head in 1911, when the Supreme Court ruled that the Standard Oil Company had violated antitrust laws, and ordered it to be broken up into 34 companies (including ExxonMobil, BP, and Chevron). This move benefited Rockefeller in the long run, as the value of his shares in the various companies would rise fivefold. This left John D Rockefeller with a personal wealth of US$900 million and the title of the richest man in history.

John D Rockefeller displayed amazing shrewdness in his business dealings. He almost always managed to come out a winner in the deals he made.

As a leader, learn to be wise in handling other people. While it is important for us to protect our reputation and character, we should also be shrewd and make sure you benefit from the deals you make.

Remember that in outside (and even internal) dealings, not everyone is thinking about what’s best for your organization. Learn to see things from the perspective of people you’re dealing with and try to discern their motivations.

Although he was the richest man in history, Rockefeller believed that you cannot focus solely on making money to become rich. He believed deeply in building character and reputation.

This is true for you as a leader. Often by chasing money, you’ll realize that money runs away from you. More than that, people run away from you too. Once you focus on building a solid character and reputation of giving value, money will begin to follow you wherever you go.

3. Give back to society

Rockefeller was a giver. Even from the first few dollars he made, he tithed 10% to his church. Throughout his life, he donated much of his vast fortune for medical research and educational institutions in the United States and other parts of the world.

At his peak, Rockefeller’s fortune amounted to approximately 1.53% of the US economy at the time. But he didn’t just hold onto the money; he used it as a tool to make a difference in the world.

Money can be used to obtain status and power. But it can also be used for much more. What social causes would you help if you had the time or money? How much money would you need to make a difference? Use this vision of making a difference as motivation for achieving your financial goals in the future. 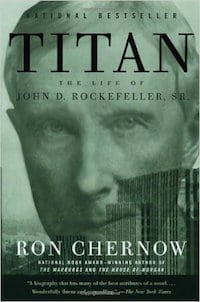 The first billionaire in the world, founder of the most powerful dynasty in America, and the man who built the Standard Oil trust. The name of John D. Rockefeller, Sr. still bares an awe-inspiring echo today, and yet, historians have struggled to decipher his elusive character.Ron Chernow, the award-winning biographer, brings us a comprehensive biography of John D. Rockefeller, shedding light on some of the mysteries and enigmas behind one of the most controversial businessmen in history of the world. 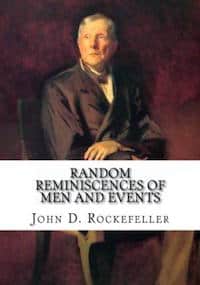 For anyone interested in peering into the mind of the richest person in modern history, and the wealthiest American of all time; Random Reminiscences of Men and Events: Autobiography, by none other than John D. Rockefeller himself, presents a personal view of life by the author. Read about the experiences of one of the greatest minds in business. 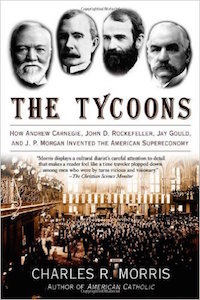 How did America come to be the richest, most productive, and arguably the most powerful country in the world? Four names stand behind the development of one of the most influential elements in the world history: the American economy.

Don’t blame the marketing department. The buck stops with the chief executive.

Every right implies a responsibility; Every opportunity, an obligation, Every possession, a duty.

If you want to succeed you should strike out on new paths, rather than travel the worn paths of accepted success.

If your only goal is to become rich, you will never achieve it.

Good leadership consists of showing average people how to do the work of superior people.

I believe that thrift is essential to well-ordered living.

Charity is injurious unless it helps the recipient to become independent of it.

Do you know the only thing that gives me pleasure? It’s to see my dividends coming in.

The only question with wealth is, what do you do with it?

Don’t be afraid to give up the good to go for the great.

I can think of nothing less pleasurable than a life devoted to pleasure.

I do not think that there is any other quality so essential to success of any kind as the quality of perseverance. It overcomes almost everything, even nature.

I have ways of making money that you know nothing of.

Good management consists in showing average people how to do the work of superior people.

I always tried to turn every disaster into an opportunity.

I believe in the dignity of labor, whether with head or hand; that the world owes no man a living but that it owes every man an opportunity to make a living.

I believe that every right implies a responsibility; every opportunity, an obligation; every possession, a duty.

I know of nothing more despicable and pathetic than a man who devotes all the hours of the waking day to the making of money for money’s sake.

It is wrong to assume that men of immense wealth are always happy.

Singleness of purpose is one of the chief essentials for success in life, no matter what may be one’s aim.

The ability to deal with people is as purchasable a commodity as sugar or coffee and I will pay more for that ability than for any other under the sun.

The most important thing for a young man is to establish a credit… a reputation, character.