John Wooden was an American basketball coach. His record of winning the NCAA Championship 10 times with the University of California, Los Angeles basketball team is unprecedented.

John Wooden was born on October 14th, 1910 in Indiana. In his youth, he became fascinated by the sport of basketball. He led his high school team to the state championship finals for three consecutive years. They won the championship in 1927 when Wooden was 14.

Wooden attended Purdue University where he was a three-time consensus All-American. He also led his team to the 1932 National Championships. After he graduated from Purdue, he earned his master’s degree from Indiana State University where he served as basketball coach as well.

After college, Wooden played professionally for the Indianapolis Kautskys where he was named to the National Basketball League’s First Team in the 1937-1938 season. Around this time, he also coached high school basketball. His record for 11 years of coaching at the high school level was 218 wins to 42 losses.

Wooden coached the Indiana State University basketball team from 1946 to 1948 before he moved to the University of California, Los Angeles (UCLA) as head basketball coach. There, he won 664 games in 27 seasons, with an 88 game undefeated streak, and four perfect 30-0 seasons. He won countless awards and honors for these unprecedented achievements.

Despite his tremendous success, Wooden never asked for a raise from his annual salary of $35,000.

John Wooden has received several honors and awards, including:

and many more, including several buildings that were erected in his honor.

Wooden had a seven-point creed which his father gave to him. This creed guided him through his life and contributed to his success as a coach. His seven-point creed is an excellent framework for great leadership even today.

1. Be true to yourself

Don’t spend your life trying to be someone else. But be true to who you are, your hopes, dreams and fears.

2. Make each day your masterpiece

Give your best in every single thing that you do.

Give back, because you’ve received much as well.

Learning should be a lifelong process, and read from good books.

Friends are essential in your journey to success and significance.

6. Build a shelter against a rainy day

Always remember a backup plan, because things almost never go according to plan.

7. Pray for guidance and give thanks for your blessings each day

Live with a thankful heart toward God. 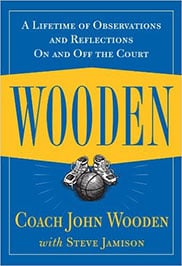 Wooden: A Lifetime of Observations and Reflections On and Off the Court

An exemplary character both on and off-court, John Wooden is a role model for many. In this book, the legendary basketball coach, devoted husband, caring father, and compassionate teacher shares his views on life. 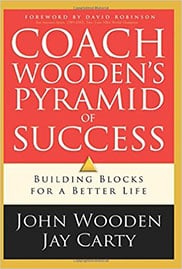 One of the most successful basketball coaches reveals his method for victory. Coach Wooden’s Pyramid of Success is a well-composed structure that can take you step-by-step to the ultimate goal.

Wooden on Leadership: How to Create a Winning Organization

A true leader is someone who knows how to invoke the maximum effort in people, and guide them to group success. In this concise and insightful book, John Wooden explains how to make it as a team.

A coach is someone who can give correction without causing resentment.

You can’t let praise or criticism get to you. It’s a weakness to get caught up in either one.

Be prepared and be honest.

It’s not so important who starts the game but who finishes it.

Ability is a poor man’s wealth.

Adversity is the state in which man mostly easily becomes acquainted with himself, being especially free of admirers then.

The main ingredient of stardom is the rest of the team.

It isn’t what you do, but how you do it.

The worst thing about new books is that they keep us from reading the old ones.

There are many things that are essential to arriving at true peace of mind, and one of the most important is faith, which cannot be acquired without prayer.

Failure is not fatal, but failure to change might be.

If you’re not making mistakes, then you’re not doing anything. I’m positive that a doer makes mistakes.

It’s what you learn after you know it all that counts.

Material possessions, winning scores, and great reputations are meaningless in the eyes of the Lord, because He knows what we really are and that is all that matters.

Success is peace of mind which is a direct result of self-satisfaction in knowing you did your best to become the best you are capable of becoming.

Talent is God given. Be humble. Fame is man-given. Be grateful. Conceit is self-given. Be careful.