This article on Leadership by Example speaks of the importance of leading a team by our actions. Many managers or leaders find it easier to lead by words; but this section will explain the powerful effect of leading by example.

If you’ve been in touch with the latest literature on management and leadership, you would have probably come across this phrase.

Leadership by Example is in fact something that happens with or without your knowledge. When you are a leader in somebody’s life, it is a natural process that your follower will grow and grow to become more and more like you.

They unconsciously learn the way you speak, your actions, even your nuances.

To visualize the effect of leadership by example, imagine yourself taking a path down a road. You come to a fork on the road and you decide to take the left fork. By the fact that you are the leader of the group, your followers naturally follow you.

Now this illustration does not just apply to a physical setting, but also to every single action that you take. This means that every little decision you make; every little word you speak makes an impact on your followers. They will unconsciously pick up those and adopt them as their own.

For example, if you have a bad habit of being late for all your meetings, your followers will unconsciously think that it is okay to be late, and you’ll begin to see them coming late for meetings.

On the other hand, if you’re a leader who watches the time closely and is always on time on his meetings, you’ll find that you’re grooming a group of people that are excellent and on time for meetings and appointments.

This obviously has great implications on the whole idea of the organization. The saying goes, everything rises and falls on leadership. This means that if your team is not performing up to standard, it is often a reflection of your lack of competence as well.

So what does this mean for you as a leader?

3 Points About Leadership by Example

1. You have to act the way you want your team to act.
To expect certain behavior from your team, you have to first act out the behavior consistently first before you have the right to speak and preach about it.

If you do that, you immediately lose all respect from your team because you’ll be deemed a hypocrite: You speak in one way and act in another. You expect a standard from your team that you yourself have not achieved.

And that is not somewhere you want to go; you’ll want to be careful about chastising or speaking with your followers about their negative behaviors; before you do that, you’ll want to look at yourself in the mirror first and check if you are innocent of all these flaws you accuse your followers of first.

Is it acceptable to express your thoughts and feelings to each other? By you sharing your feelings freely with some of the team members, you unconsciously give your team permission to do so too.

Leadership by example runs deeper than this and there are so many more things that people actually unconsciously observe and learn through you.

Having this thought in mind, you should examine your own behavior and understand that whether you like it or not, you’re leading by example.

It might be a bad example or a good example, but as a leader in their lives, you’ll teach them not just through your words but through the way you live your own life as well.

The diagram below shows the relationship between the Leader, the Team and the Organization.

The size of the yellow area represents the sum of the character, ability and talent of the Leader. The growth of the Leader will give rise to a larger foundation upon each the Team can grow.

As the Team grows, so will the Organization grow in terms of its influence, sales or any other corporate objective. 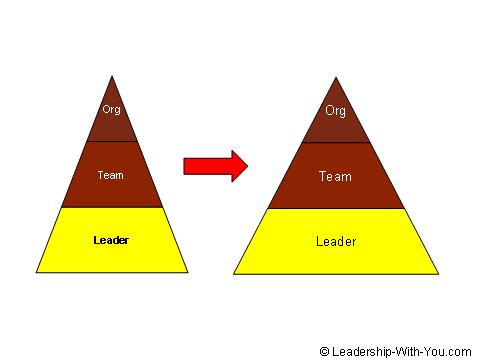 By committing yourself to live with greater discipline, greater drive, you’ll find that your followers will unconsciously follow and adopt your way of living.

And as an organization, you’ll begin to see growth, be it in numbers, in sales, in influence because you made that first step to commit yourself.

Return from Leadership by Example to Home Page