300 is a part of Leadership Movies, a series of films with leadership themes. Learn about how you can become a better leader by watching leadership in action. 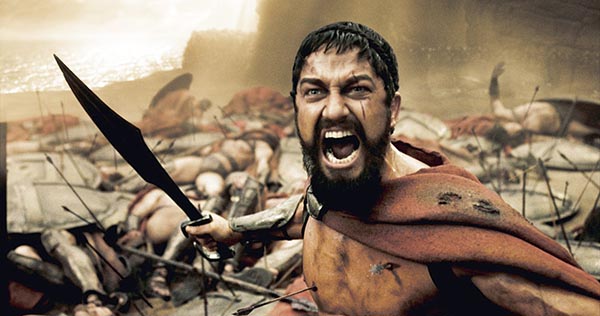 300 is a 2007 American film adapted from the historical Battle of Thermopylae where 300 men from the Spartan elite army held off a million advancing Persian forces at a choke point at Thermopylae Pass. The movie zooms into the lives of the Spartans as they face off in a battle that meant certain death for themselves.

1. Leadership sometimes demands that you make unpopular decisions.
Leonidas had to make a decision to go ahead with 300 loyal soldiers to defend his country despite his senate’s refusal to do so. As a leader, you have to know in your heart the right thing to do, and do it despite it being unpopular.

2. There are virtues in life worth more than life itself,
As seen in the movie, the Spartans believed in the afterlife, and they believed that living gloriously in this life will give them eternal life, and there are virtues like courage and integrity that are worth living for, and worth dying for. It is the understanding of this that makes a leader not just good, but great.

3. Leaders pay the price.
There is always a price of leadership. In the movie 300, the people who chose to fight for their country gave their lives for it. But what happened after what the effect of their leadership. They rallied the whole nation of Sparta and Greece against the Persian army. Not many people will pay the price, but leaders who do will see the reward of their vision coming to pass.

“No retreat, no surrender. That is Spartan law. And by Spartan law, we will stand and fight… and die. A new age has begun: an age of freedom! And all will know that 300 Spartans gave their last breath to defend it!” – King Leonidas

Spartans! Ready your breakfast and eat hearty, for tonight we dine in hell! – King Leonidas

“Remember us.” As simple an order as a king can give. “Remember why we died.” For he didn’t wish tribute or song. No monuments, no poems of war and valour. His wish was simple: “Remember us,” he said to me. That was his hope. Should any free soul come across that place, in all the countless centuries yet to be, may all our voices whisper to you from the ageless stones: Go tell the Spartans, passer-by, that here, by Spartan law, we lie. – Dilios

The world will know that free men stood against a tyrant, that few stood against many and, before this battle is over, that even a god-king can bleed. – King Leonidas

Return from 300 to Leadership Movies