Michael Scott is a comedic fictional character from The Office. As a manager in the American series, he is portrayed as dedicated, hardworking, and passionate. However, he is somewhat lacking in the EQ department and often takes offence at the pettiest office blunders.

Nonetheless, there are leadership lessons to be had from some of his lines on the series however funny, even condescending, they are.

1. The best leadership is equal to withstanding what seems impossible.

Even if a certain challenge seems too impossible to be conquered, a good leader has to have a goal for his members, and that is to keep inspiring them to win no matter what. By transmitting that state of mind, they will surely think of not settling for what they can already do, but aiming for what is the best thing to do.

2. A leader has to sacrifice in order to win.

“Granted, maybe this was not the best idea, but at least we care enough about our employees that we are willing to fight for them.”

A leader means being ready for everything that is about to come. He has to face it all without a single fear. Circumstances may come and play havoc, but knowing how to fight in a rightful way is more than enough to furthering a stable and peaceful group.

3. A leader should consider his members as valuable and special as himself.

“Do I have a special someone? Well, yeah of course. A bunch of ’em. My employees.”

Being a leader can be an exhausting task, but witnessing the fact that the people surrounding you are striving really hard to reach the peak of success is enough to bring a tremendous solace. By that reason, they deserve to be acknowledged and should be given a special space within the depths of every leader’s heart.

4. Leaders gain members by showing how wise and determined they are.

A great leader needs to be wise and determined at certain challenges. For not having such will badly lead the group in a futile side of life.

5. Leaders should know how to set a boundary. 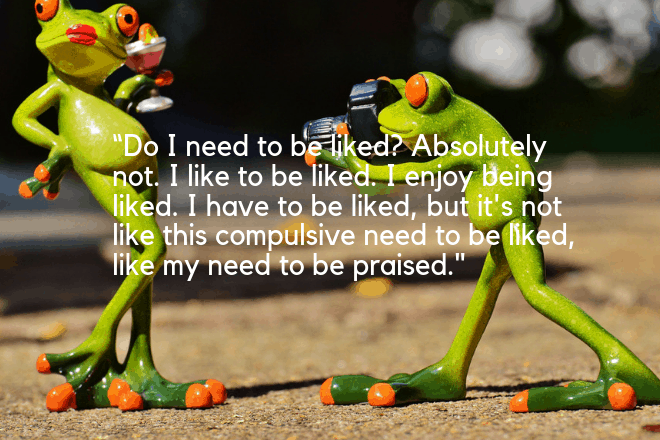 Every leader should set a boundary between being liked to impress and being liked to be loved, respected, and valued. For one really differs from the other one, a leader has to choose which being liked he needs to possess.

6. Leaders value the essence of equality.

Leaders should exert a perfect balance at everything that has significant meaning. Every single part of which should be treated with equality in order to be successful in the very end.

“The people that you work with are, when you get down to it, your very best friends.”

A leader being with his people should practice appreciation. Having such can make the group’s bond stronger, longer, and lasting.

8. A leader does not exclude anyone from the group.

“Leader. Ship. The word ‘ship’ is hidden inside the word ‘leadership,’ as its… derivation.”

The best way to do leadership is to make everyone feel included regardless of how they perform. Working as a group gives a big impact to the task.

9. A leader leads his people to choose better.

“People will never be replaced by machines. In the end, life and business are about human connections. And computers are about trying to murder you in a lake. And to me the choice is easy.”

Leaders appreciate one’s ability. It is just that one has to do their greatest.

10. A leader should express gratitude. 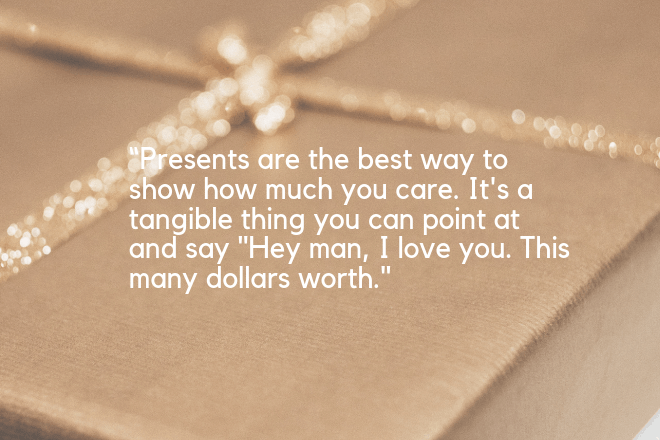 “Presents are the best way to show how much you care. It’s a tangible thing you can point at and say “Hey man, I love you. This many dollars worth.”

A certain leader should express how gratifying he is working with a group. He has to at least recognize everyone’s very existence. A present or a token of appreciation could be great for this purpose, too.

11. Leaders give chances to their members.

“Always set yourself apart from your competition.”

Leaders do not compete with their members. They let them show how to do their magnificence.

“Society teaches us that having feelings and crying is bad and wrong. Well, that’s baloney, because grief isn’t wrong. There’s such a thing as good grief. Just ask Charlie Brown.”

Leaders must have empathy. To put himself in anyone’s shoes is the key to keeping his people.

Leaders with such consideration never take a certain someone on the verge of disturbance. He makes them as comfortable as they can.

“Saw Inception. Or at least I dreamt I did.”

A leader does not settle for what is less. He must think of another unique way for the betterment of his people. 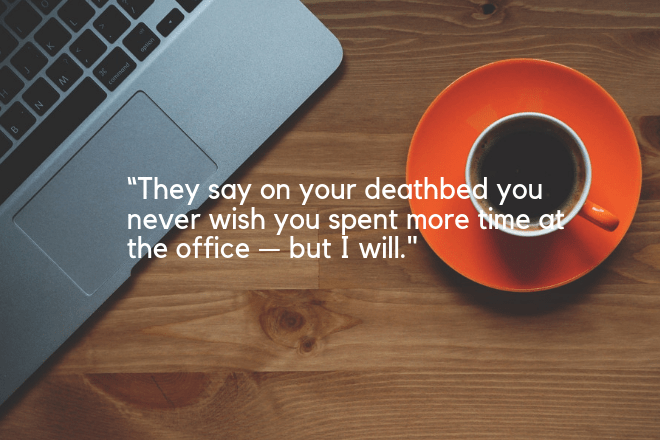 “They say on your deathbed you never wish you spent more time at the office — but I will.”

Leaders should practice perseverance. They are dedicated and sometimes they have to endure everything for the sake of their group. They never go MIA – not even on their deathbed.

“You know what they say. ‘Fool me once, strike one, but fool me twice…strike three.”

Leaders should exist professionally. No one has the right to make them look fools.

“Now, you may look around and see two groups here. White collar, blue collar. But I don’t see it that way. And you know why not? Because I am collar-blind.”

Leaders do not underestimate someone’s capability to perform in a specific task. Everyone is being treated in an equilibrating spectrum.

18. Leaders know how to pinpoint things.

“It just seems awfully mean. But sometimes, the ends justify the mean.”

Leaders should know how to find which part has gone wrong. They have to work out with a problem for its very own ending.

19. Leaders do differentiate what is good and what is not.

“There’s no such thing as an appropriate joke. That’s why it’s called a joke.”

Leaders will find it easy to differ only if they are serious enough with their tasks. They need to take everything seriously as they are standing as examples for everyone.

20. Leaders know the importance of love. 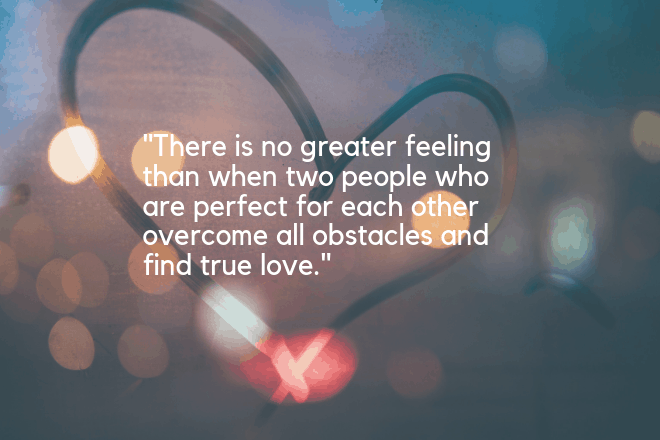 “There is no greater feeling than when two people who are perfect for each other overcome all obstacles and find true love.”

Leaders should possess a deluging love over someone to go through whatever challenges they are taking. They will stand as an inspiration to go on.

“Abraham Lincoln once said that, “If you’re a racist, I will attack you with the North.” And those are the principles that I carry with me in the workplace.”

Regardless of how someone looks like, leaders should never consider it as a disadvantage. Respect shall be gotten respect.

“Webster’s Dictionary defines ‘wedding’ as ‘the fusing of two metals with a hot torch.’ Well you know something? I think you guys are two medals. Gold medals”

Leaders can also stand as speakers toward getting the best relationship with your partner. They care for everything that is something to do with them.

“Nobody likes beets, Dwight! Why don’t you grow something that everybody does like? You should grow candy.”

Leaders will do something just to make someone feel belonged. As they also been through all of that.

24. Leaders do have information to grasp.

“Wikipedia is the best thing ever. Anyone in the world can write anything they want about any subject. So you know you are getting the best possible information.”

Just like Wikipedia, leaders are very useful. It is very essential for their role as the rulers of the people.

25. Kind leadership defines how good the leader is. 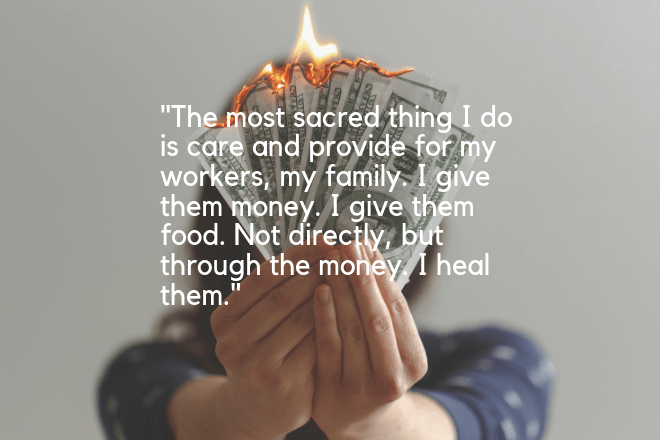 “The most sacred thing I do is care and provide for my workers, my family. I give them money. I give them food. Not directly, but through the money. I heal them.”

A leader provides enough kindness for his followers. He makes them feel convenient by giving them what they deserve.

26. A confident leader is charistmatic.

“Go into every situation with confidence.”

No matter which situation the leader is in, he is always full of confidence. He breaks the silence and makes his followers aspire to do the same.

27. A leader accepts his insecurities.

“Accept your flaws and make an effort to change them.”

A perfect leader does not mind giving a glance at his own insecurities. He always moves forward and looks on the silver-lining within himself.

28. Existing chaos does not confuse a leader.

“If there’s a conflict, always attempt to strike a balance between opposing sides.”

A brainy leader knows how to balance both good and bad sides. He always gives a chance to hear which side is speaking the truth.

“Figure out ways to really get your point across.”

A leader speaks what is going on in his head. He has to be straightforward in order to express himself and to know the hidden lies.

30. A leader knows how to handle genuine love. 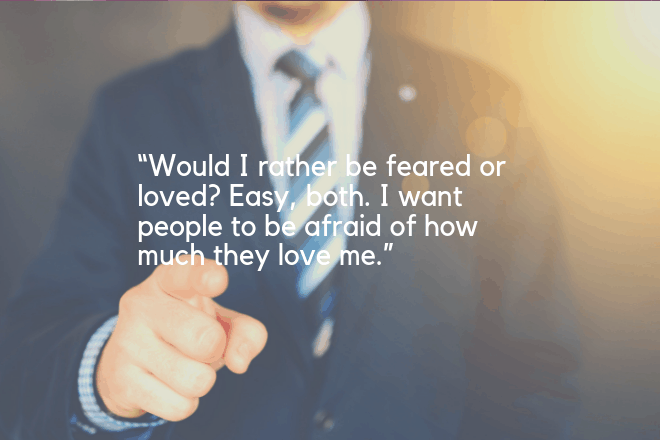 “Would I rather be feared or loved? Easy, both. I want people to be afraid of how much they love me.”

A leader does not always mean being clever in every situation. Sometimes, a little pour of love is what his people need.