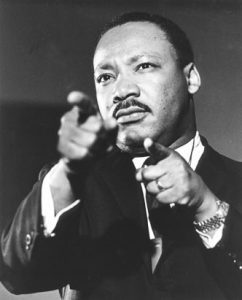 Martin Luther King Jr. was an American Baptist preacher, activist and prominent leader in the American Civil Rights Movement. Today, he is identified as an icon of human rights, and his famous “I Have a Dream” speech is still much admired and quoted.

He studied at Morehouse College and graduated with a Bachelor of Arts in sociology. King went on to study systematic theology after his graduation and received a Doctorate of Philosophy in 1955.

His first involvement in the American Civil Rights Movement was the Montgomery bus boycott in 1955. He started the Southern Christian Leadership Conference, a group created by combining black churches, which organized nonviolent demonstrations for civil rights reform.

King applied Gandhi’s nonviolent protest methods in all his demonstrations. It was extremely successful, and helped sway public opinion in favor of the movement.

In 1963, the Big Six, a group of six organizations all with the same purpose of ending racial segregation, organized the March on Washington to bring focus to important issues including the Civil Rights Movement. The march was a resounding success: a quarter million people of all ethnicities attended the event. It was here that King made his famous “I Have a Dream” speech.

For his contributions to the American Civil Rights movement, King was awarded the Nobel Peace Prize in 1964.

He was assassinated in 1968 while on a trip to Memphis. While standing outside his motel lobby, he was shot and was pronounced dead that same night.

Here are some of the awards and honours that Martin Luther King Jr has won:

1. Be a proactive leader

King held the view that passivity was a way of perpetuating evil. He was more gravely affected by the silence of his friends than the voice of his enemy.

As a leader, you simply cannot be passive. When there’s conflict going on between your team members, you should resolve it. When there’s a major challenge facing your organization, you cannot hide. You have to be proactive in initiating communication, facing challenges and solving problems. This is what makes you stand out as an excellent leader.

2. Creative leadership is necessary for change

King recognized the power of unity, that a group of disciplined and organized individuals who seek positive change in the world could make a difference. With that revelation, he led the Civil Rights Movement to achieve its purpose.

An effective leader always challenges the status quo. He does not allow social norms to define his methods or objectives, but he looks to his values and sees the world through his own lens.

3. Stick to your principles

King believed that nonviolence was a more powerful weapon than violence and hatred in effecting change. With that, he used nonviolence as the means to attain equal rights for his people. He stuck to his beliefs and principles, even when it might have been easier to go another route.

As a leader, let your principles guide your actions and decisions. Don’t fall prey to making decisions that go against what you believe for short-term gain. Doing so erodes your credibility as a leader. 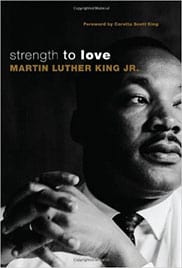 Strength to Love is a true life-changing read that will guide you through Martin Luther King Jr’s philosophy and view of life. It is a book that will stay with you long after the first reading. 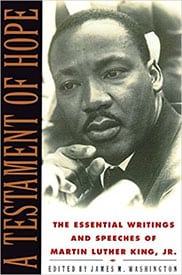 A Testament of Hope: The Essential Writings and Speeches of Martin Luther King, Jr.

This single-volume collection of speeches, writings, interviews and thoughts by Martin Luther King, Jr. brings us a priceless view of the man. His legacy remains ever so relevant in today’s society, ushering people to unite in equality. 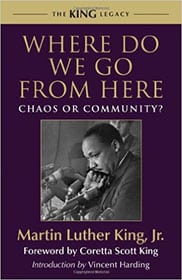 Where Do We Go from Here: Chaos or Community? (King Legacy)

In an isolated location in Jamaica, Dr. Martin Luther King, Jr. went away from the world to find solace in which he gathered his thoughts and created his final manuscript. Have we managed to build a better world he dreamed about, or could we not be farther away from it?

A genuine leader is not a searcher for consensus but a molder of consensus.

Love is the only force capable of transforming an enemy into friend.

Man must evolve for all human conflict a method which rejects revenge, aggression and retaliation. The foundation of such a method is love.

Never succumb to the temptation of bitterness.

Nonviolence is a powerful and just weapon which cuts without wounding and ennobles the man who wields it. It is a sword that heals.

Our lives begin to end the day we become silent about things that matter.

Rarely do we find men who willingly engage in hard, solid thinking. There is an almost universal quest for easy answers and half-baked solutions. Nothing pains some people more than having to think.

The art of acceptance is the art of making someone who has just done you a small favor wish that he might have done you a greater one.

A man who won’t die for something is not fit to live.

All labor that uplifts humanity has dignity and importance and should be undertaken with painstaking excellence.

The question is not whether we will be extremists, but what kind of extremists we will be… The nation and the world are in dire need of creative extremists.

The time is always right to do what is right.

Almost always, the creative dedicated minority has made the world better.

I have a dream that my four little children will one day live in a nation where they will not be judged by the color of their skin, but by the content of their character.

An individual has not started living until he can rise above the narrow confines of his individualistic concerns to the broader concerns of all humanity.

History will have to record that the greatest tragedy of this period of social transition was not the strident clamor of the bad people, but the appalling silence of the good people.

At the center of non-violence stands the principle of love. .

Every man must decide whether he will walk in the light of creative altruism or in the darkness of destructive selfishness.

Faith is taking the first step even when you don’t see the whole staircase.

He who passively accepts evil is as much involved in it as he who helps to perpetrate it. He who accepts evil without protesting against it is really cooperating with it.

There is nothing more tragic than to find an individual bogged down in the length of life, devoid of breadth.

We must accept finite disappointment, but never lose infinite hope.

I believe that unarmed truth and unconditional love will have the final word in reality. This is why right, temporarily defeated, is stronger than evil triumphant.

I have a dream that one day every valley shall be exalted, every hill and mountain shall be made low, the rough places will be made straight and the glory of the Lord shall be revealed and all flesh shall see it together.

The hottest place in Hell is reserved for those who remain neutral in times of great moral conflict.

In the End, we will remember not the words of our enemies, but the silence of our friends.

Life’s most persistent and urgent question is, ‘What are you doing for others?’

The function of education is to teach one to think intensively and to think critically. Intelligence plus character – that is the goal of true education.

The quality, not the longevity, of one’s life is what is important.

The hope of a secure and liveable world lies with disciplined nonconformists who are dedicated to justice, peace and brotherhood.

If physical death is the price that I must pay to free my white brothers and sisters from a permanent death of the spirit, then nothing can be more redemptive.

His iconic “I Have a Dream” speech is considered one of the greatest speeches in history. Watch it here: