Napoleon was one of the greatest conquerors in the history of the modern world. Napoleon’s rise came in a time of chaos, during the French Revolution.

During his peak of his reign, he conquered almost the whole of continent Europe with a mix of military ingenuity, ambition and cold-bloodedness.

Napoleon was born second into a family of seven in the island of Corsica on 15 August 1769. During his youth, he had an uncanny interest in warfare and mathematics. 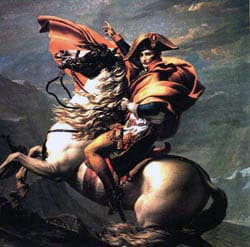 Late on in life, he would go to a military college in France to graduate as 2nd Lieutenant in the artillery division.

During this time, France was in a period of unrest as the people were unhappy with the monarchy. It would soon turn into the French Revolution where the people of France fought for Democracy.

Napoleon took these opportunities and through a series of victories over the riots and against the British, he rose up to the top of the government quickly and became a brigadier general at a young age.

His ambition would soon take him to attack the neighbouring countries, Italy, Austria, Russia and Great Britain.

Through a series of military victories, he would eventually capture the whole of continental Europe. However, he was not able to annex Great Britain or Russia.

His downfall began when in a campaign to Moscow. While he managed to raze 2/3 of the city, he was defeated by the Russian Army in his journey back to Austria.

This defeat marked the beginning of the end of Napoleon. He would surrender his nation, but returned from exile in a last bid to restore France to its original glory.

However, in the famous battle of Waterloo, he would suffer a defeat that would end his military career. He was exiled to the island of St. Helena and kept prisoner till his death on 5 May 1821, supposedly by stomach cancer, but suspected by many as death by poisoning.

1. Vision and Imagination
Napoleon was a man of great vision and imagination. During his reign as emperor, he would win his men over with his visions of great glory. Also he would devise revolutionary military tactics that was well ahead for any military leader in his time.

Once again, we see that leadership with vision is extremely important. Before you can lead people, people also need to know where you are leading them. Be ready to share your organizational vision at all times, because it inspires people to go another mile with you.

2. Know your people
Unlike the monarchy that was ruling France during that time, Napoleon understood the importance of winning people over to himself. He would know his soldiers by name and he would call them as he walked through the camps.

Sometimes when we work in organization, it is tempting to hide behind the desk and manage your whole organization by email or phone calls. But ultimately, organizations are built upon people relationships and it is your relationships that will ensure your continual success and leadership.

Take time to get to know your team. Instead of telling someone over email, perhaps walking over to their table will do far more than achieve the task, it will bond you and your team member.

3. Persistence is key for your success
Napoleon saw the importance in persistence in attaining victory. We would see that most evidently in his coming back to take the throne of France even after he was exiled.

Whatever you do, remember that consistent effort will be the key of your success. You can start off failing a few times, but it is your ability to come back and try again that will ensure your success in the long run.

One should never forbid what one lacks the power to prevent.

Riches do not consist in the possession of treasures, but in the use made of them.

The word impossible is not in my dictionary.

There are only two forces in the world, the sword and the spirit. In the long run the sword will always be conquered by the spirit.

A picture is worth a thousand words.

Nothing is more difficult, and therefore more precious, than to be able to decide.

One must change one’s tactics every ten years if one wishes to maintain one’s superiority.

The truest wisdom is a resolute determination.

A leader is a dealer in hope.

There is one kind of robber whom the law does not strike at, and who steals what is most precious to men: time.

There is only one step from the sublime to the ridiculous.

Victory belongs to the most persevering.

It requires more courage to suffer than to die.

Let the path be open to talent.

Music is the voice that tells us that the human race is greater than it knows.

Take time to deliberate, but when the time for action has arrived, stop thinking and go in.

When small men attempt great enterprises, they always end by reducing them to the level of their mediocrity.

With audacity one can undertake anything, but not do everything.

You must not fear death, my lads; defy him, and you drive him into the enemy’s ranks.

The best cure for the body is a quiet mind.

The best way to keep one’s word is not to give it.

Death is nothing, but to live defeated and inglorious is to die daily.

Four hostile newspapers are more to be feared than a thousand bayonets.

Great ambition is the passion of a great character. Those endowed with it may perform very good or very bad acts. All depends on the principles which direct them.

Impossible is a word to be found only in the dictionary of fools.

A true man hates no one.

You must not fight too often with one enemy, or you will teach him all your art of war.

Courage is like love; it must have hope for nourishment.

Ability is nothing without opportunity.

The first virtue in a soldier is endurance of fatigue; courage is only the second virtue.

It is the cause, not the death that makes the martyr.

Ten people who speak make more noise than ten thousand who are silent.

The Video Biography of Napoleon

» Genghis Khan
Genghis Khan is one of history’s greatest conquerors. During his reign, he conquered more land than any other ruler in history would, having his territory reach twice the size of the Roman Empire.

» Alexander The Great
Alexander was one of history’s greatest conquerors. Born as an heir to the Macedonian King, his great ambition led him to destroy the greatest army in his time, the Persian Empire. At its height, Alexander’s empire stretched all the way from modern day Italy to the Himalaya.

» George S Patton
George Smith Patton, Jr. was a United States Army officer best known for his leadership as a general during World War II. In WWII, he successfully defeated Nazi Germany on many battle fronts through his unique blitzkrieg military strategies.

» Hannibal Barca
Hannibal Barca was a military commander of the Carthage army. He led a famous campaign in the second Punic War against the Roman army, remaining undefeated until the very gates of Rome. His most famous military accomplishment was the battle of Cannae, where he defeated a Roman army size double of his.

» Sun Tzu
Sun Tzu was an ancient military commander and strategist from China. He is most known for his work, Sun Tzu’s Art of War. Till date, his works are being used in military warfare and business management.