Phil Jackson was born to two Christian ministers. Growing up, Jackson lived a very strict life; TV and dancing weren’t allowed in the house. He and his siblings threw themselves passionately into sports because it was one of the few activities they could do outside of home.

Jackson was tall (6’ 8”) and had a physique suited for a basketball player. He played very well at the college level and caught the attention of scouts. He was recruited by the New York Knicks.

Although Jackson was not a good offensive player, he compensated by being an outstanding defender. Jackson transferred from the Knicks to the New Jersey Nets in 1978. He retired in 1980 after playing two seasons with the Nets, and soon after went into coaching.

He started coaching lower level professional clubs before his first professional NBA coaching job with the Chicago Bulls. He joined the club as assistant head coach and eventually took over as head coach in 1989.

His coaching career was very successful thanks to his constant employment of a triangle offense strategy. He won six NBA championship titles for the Bulls, before conflict with the General Manager led to his departure. Later he joined the Lakers, where he was also extremely successful — winning five titles in his 10 years as head coach. He retired from coaching in 2011 and joined the New York Knicks as President in 2014.

Phil Jackson believes strongly in teamwork. His triangle offense exemplified how a team should work together: no individual should be ‘glorified’ at the expense of the team. 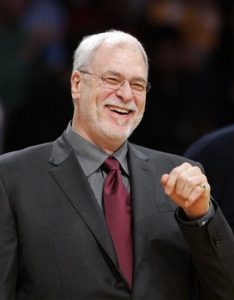 Despite having big personalities like Dennis Rodman and Kobe Bryant on his roster, he never allowed these stars to become the center of the team. He emphasized a team-oriented style of play that became very successful.

The application is the same for all teams. A good team leader knows how to use each member’s strength to their advantage. While it is sometimes tempting to elevate the “CEO” above the rest of the company, it is important to note that the best companies in the world don’t have individual “stars”. Instead, they focus on the power of teamwork.

2. Visualization is a great tool for success

Phil Jackson used the power of visualization and role-playing in his practices. One rumor has it that in anticipation of a game against an important opponent, Jackson had one of his players dress up exactly like their opponent so that his players could visualize beating and overcoming him in practice.

Events often happen in the imagination of a person before they are brought into reality. You too can use the power of role-playing to help your team envision success. Visualization allows you and your team to mentally experience success before it happens, and role-play gives you an opportunity to test your plans and spot any mistakes or shortcomings before you actually execute.

3. Staying calm and collected under pressure

If you’ve ever seen Jackson coach, you might have noticed how calm and cool he looks on the bench, even during high-pressure games. According to his players, Jackson’s calm energy helps them stay focused.

Jackson believed in the power of meditation and clear thinking to improve performance, and was known to teach breathing techniques to his players.  “I discovered that when I had the players sit in silence, breathing together in sync, it helped align them on a nonverbal level far more effectively than words. One breath equals one mind.”

As a leader, being able to manage stress is a key skill. Try to incorporate a daily practice of meditation or breath training; it’s a habit that has been shown to improve focus and reduce stress. Most leaders could do with less stress in their lives! 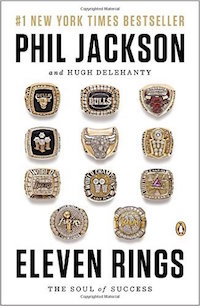 Eleven Rings: The Soul of Success

Learn all about the mindfulness, team chemistry, leadership and unparalleled success of one of the legendary basketball and sports figures of all times. Phil Jackson brings you his personal view on his immense success and innovative approach to leading. 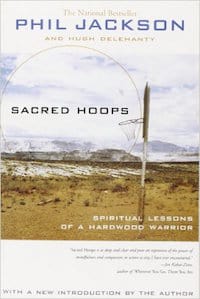 The Zen Master of basketball, the calm, yet passionate leader behind one of the greatest achievements in sports; Phil Jackson shares all of his triumphs and endeavors in Sacred Hoops: Spiritual Lessons of a Hardwood Warrior with a new introduction. Updated for today’s reader, this book remains relevant and inspiring. 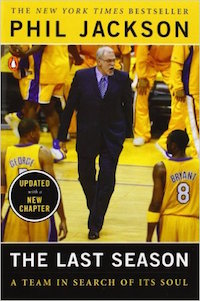 The Last Season: A Team in Search of Its Soul

Any self-respecting Lakers fan must have a copy of The Last Season: A Team in Search of Its Soul on their bookshelf. This candid account brings you the captivating story behind the rollercoaster ride of the legendary team of L.A. Lakers and the leading figure at the forefront of the team’s phenomenal success.

Always keep an open mind and a compassionate heart.

Love is the force that ignites the spirit and binds teams together.

Wisdom is always an overmatch for strength.

If you meet the Buddha in the lane, feed him the ball.

Approach the game with no preset agendas and you’ll probably come away surprised at your overall efforts.

I gave it my body and mind, but I have kept my soul.