Name Grid is a quick reaction word game that fosters communication between the groups. This game only takes a few minutes to play, but is sure to bring out excitement in your participants.

1. Each group has to draw grids where they will have to write the first four letters of their first names in those grids one below another. Example: 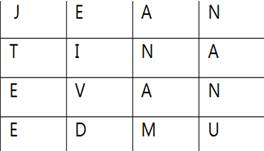 2. Each team will have three minutes to write down words that can be formed by only the letters in the grid.

3. The letters do not have to be in a straight line but they have to be joining either horizontally, vertically, diagonally. In the example above, you could form the words: VINE, MANE, JIVE, DAM and so on.

4. When the time is up, each team adds up their points for each word they have found. You can use the following as their score sheet:

5. The group with the most points at the end of three minutes is the winner.

6. Tip: In order to make this game even more competitive and the participants more involved, you can consider giving them an attractive prize.

Icons made by Freepik from www.flaticon.com is licensed under CC BY 3.0

Hosts and Guests
Hosts and Guests is a game about taking the initiative. It tests individuals in their ability to take lead in any relationship in a casual or business setting.

Balloon Fight
Balloon Fight is a physical leadership icebreaker game that can be used to break the ice for a group of strangers or used for observing group dynamics of a team in a competitive setting.

Blow Wind, Blow!
“Blow Wind, Blow!” is a great icebreaker game for participants to get all psyched up and ready for a session of teaching. It helps build the atmosphere of a session and fosters bonding through fun.

Newspaper Hop
Newspaper Hop is a game of teamwork to explain the importance of planning, collaboration and communication in the workplace.

Truth or Lie
Truth or lie is another simple icebreaker that you can play for the participants to get to know each other better with ‘wow’ facts about themselves.

Who am I?
Who Am I is a simple icebreaker that you can play to get the participants to do quick self-introductions with each other. It’s used in groups where participants are generally strangers.

Word Scramble
Word scramble’s purpose is to demonstrate the importance of cooperation in the team, and is useful for you to observe you team’s group dynamics as they work together in to solve a problem.

Whacko!
Whacko! is a classic team building game that helps new strangers to get to know each other’s names and also to have a lot of fun at the same time.

Charades
Charades is a classic game for participants of all ages, whether you’re 5 or 50, it’s a fun filled game that can engage the players fully and bring them closer together through lots of acting and drama fun!

Money Machine
Money Machine is a interactive group game that requires a lot of moving around with lots of shouts and laughter that will help your team bond or help your participants ice break!

Cat and Mouse
Cat and Mouse is a fast-paced, exciting team bonding game that will bring your participants closer together through lots of laughter, screams and protests as the ‘Cat’ chases the ‘Mouse’!

River Crossing
River Crossing is a competitive fast-paced game of cooperation that requires teamwork, coordination and speed. It is a great leadership icebreaker that will help to cultivate the team dynamics within a group.

Pull the Tail!
Pull the Tail is a free for all frenzy that brings down a lot of chaos, fun and laughter in the crowd! It’s a great physical team bonding exercise that will bring your participants closer together.

Human Bingo
People Bingo is a game that can fosters communication and great for getting a group of new friends to know each other deeper after going through the game.

Name Grid
Name Grid is a game where it fosters communication between the groups in a quick reaction and fast thinking game. This game will take only a short time but will bring out excitement and passion as the participants compete in a fast paced word game.

Line Up
Line Up is an icebreaking game where everyone has to communicate without speaking and line up in a straight line according to a pre-determined characteristic. It is game that will illustrate the power of communication and at the same time, have a group of new friends have a lot of fun together.

Pass the Objects
Pass the Objects is an icebreaking game where objects have to be passed down a line of people holding spoons with their mouth! It is a game of communication, teamwork and strategy that will be sure to bring out lots of energy and laughter from the participants.

Entangle
Entangle is an icebreaker where participants’ hands are all entangled up in the center and they have to communicate in an attempt to disentangle themselves.

Words from Strings
Word from Strings is a game that fosters communication, coordination and teamwork within the group to complete the task. Participants have to cooperate by controlling a marker with their strings to write a full word.

Blindfold Maze
Blindfold Maze is a team icebreaker where all participants will be blindfolded and they have to get through an obstacle course with only instructions from one leader. It is a game of communication and trust that will also ensure your participants have a great time together.

Ping Pong Knockout
Ping Pong Knockout is a fun icebreaker that will guarantee lots of laughter as a few unlucky participants will have to attempt to knock down cups by swinging their bodies.

Human Checkers
Human Checkers is an icebreaker game that requires good communication and strategy to win. In this game, participants have to play checkers, but with themselves as the chess pieces.

Shrinking Island
Shrinking Island is an icebreaker game that literally fosters togetherness and teamwork in order to achieve the goal of standing on a ‘shrinking’ island. Participants have to attempt to keep afloat on a piece of newspaper as it becomes smaller and smaller.

Ha-ha-ha Game
Ha-ha-ha Game is a game that will be a great ice-breaking game and one requires a lot of focus, concentration and coordination in order to succeed. Participants will literally laugh at themselves through this fun filled physical activity.

Animal Farm
Animal Farm is an icebreaker game that is guaranteed to bring out lots of laughter and fun as participants have to mimic animal sounds in order to find one another. It is a simple and fun game that can help participants warm up to one another as they let loose.

Jones
Jones is an icebreaker game that gets people blindfolded and then have them communicate with one another with this unique word “Jones”.

Hula Hoop Chain
Team Building Ice Breakers: Hula Hoop Chain is an icebreaker game where participants have to attempt to weave a Hoola hoop through a series of connected bodies in the shortest time possible.

Human Value
Human Value is an icebreaker game where all participants get a value attached to them, and they have to combine with other participants to form a certain dollar value. It’s a fun and exciting game with lots of running around, smiles and laughter.

Captain on Deck
Captain on Deck is an icebreaker game for a big group. It’s a game that requires each participant to form groups according to the captain’s commands and it is bound to create much joy, laughter, and bring the participants closer together.