Brotherhood is more than just the memory of drunken nights and late-night parties. The true meaning of brotherhood extends well beyond that: It is about fellowship and friendship that encompass culture, tradition, and family.

Those who believe in brotherhood would argue that it is the mutual understanding and support that they get from their brothers that empower them to work together.

With that in mind, here you’ll find 50 of our favorite quotes about Brotherhood.

“Never hold resentments for the person who tells you what you need to hear; count them among your truest, most caring, and valuable friends.”

“It is at times such as this that we show our true spirit of giving and of brotherhood of revealing the good Samaritan in all of us.”

“The idea of brotherhood re-dawns upon the world with a broader significance than the narrow association of members in a sect or creed.”

“Brotherhood is the very price and condition of man’s survival.” 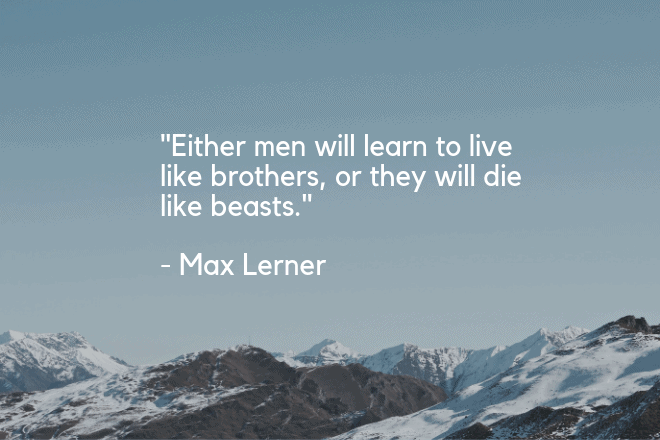 “Trying to build the brotherhood of man without the fatherhood of God is like trying to make a wheel without a hub.”

“There is a destiny which makes us brothers; none goes his way alone. All that we send into the lives of others comes back into our own.”

“Brotherhood is an ideal better understood by example than precept!.” 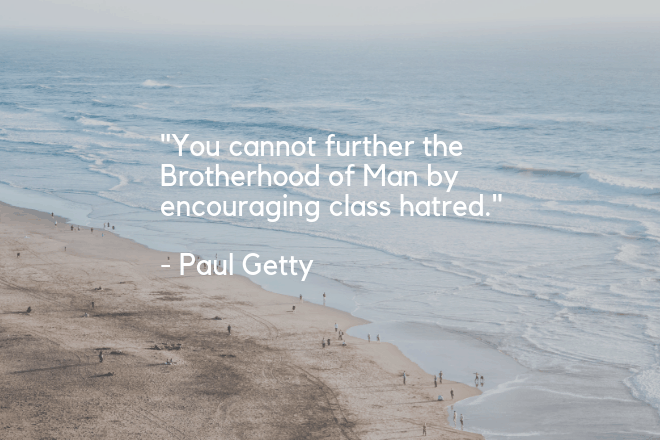 “You cannot further the Brotherhood of Man by encouraging class hatred.”

“Develop a sense of the brotherhood of man. Look upon each person as your own brother. There is only one caste, the caste of humanity. All of us belong to the human race, so everyone is equal. Therefore, love each one equally.”

“It takes two men to make one brother.” 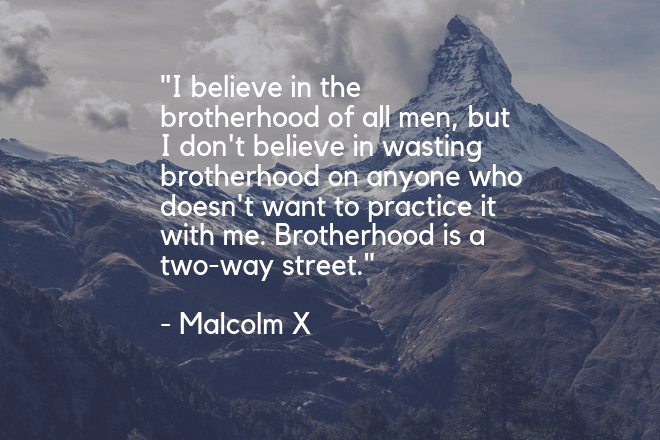 “Sometimes being a brother is even better than being a superhero.”

“People are realizing that color has no bearing on what’s known as brotherhood.”

“We have flown the air like birds and swum the sea like fishes, but have yet to learn the simple act of walking the earth like brothers.” 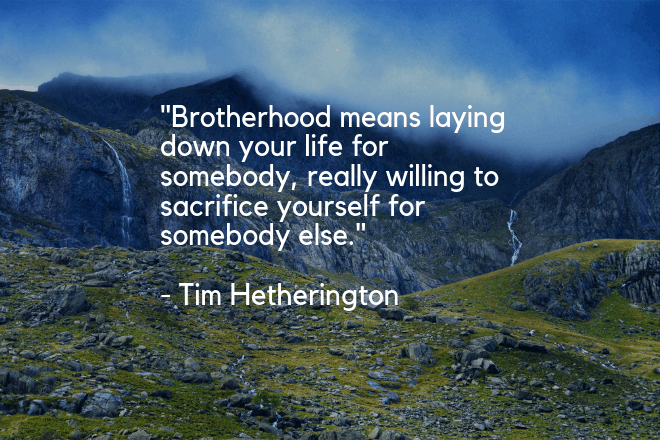 “Brotherhood means laying down your life for somebody, really willing to sacrifice yourself for somebody else.”

“We don’t need holy wars. What we need is tolerance and brotherhood and simple humanity.”

“Nothing about ‘Brotherhood’ is ever wrapped up in a nice package.” 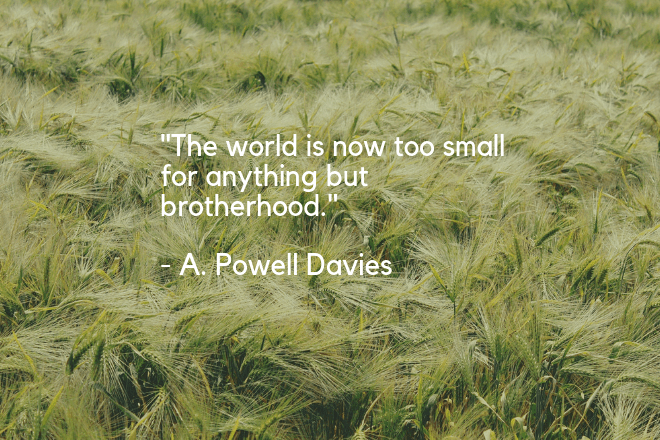 “The world is now too small for anything but brotherhood.”

”On this shrunken globe, men can no longer live as strangers.”

“We cannot live only for ourselves. A thousand fibers connect us with our fellow men; and among those fibers, as sympathetic threads, our actions run as causes, and they come back to us as effects.” 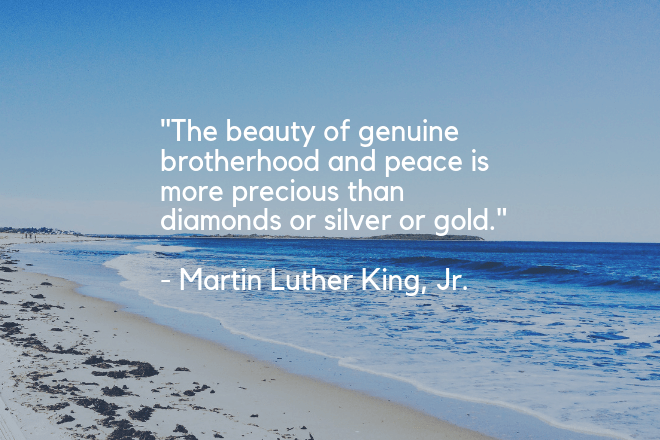 “The beauty of genuine brotherhood and peace is more precious than diamonds or silver or gold.”

“To become truly great, one has to stand with people, not above them.”

“There is a destiny that makes us brothers: None goes his way alone: All that we send into the lives of others comes back onto our own.”

“Grant us brotherhood, not only for this day but for all our years a brotherhood not of words but of acts and deeds.” 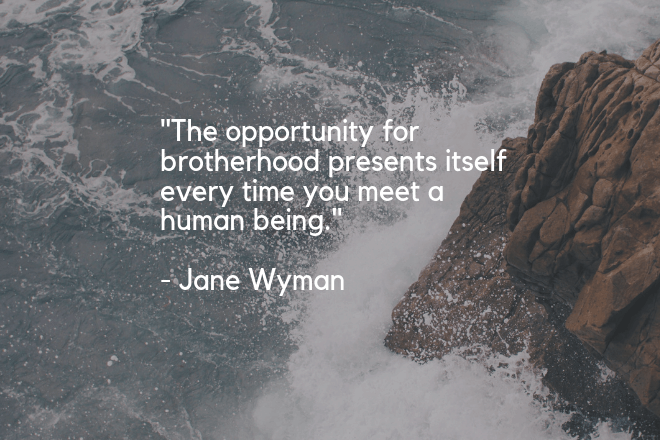 “The opportunity for brotherhood presents itself every time you meet a human being.”

“You earn brotherhood – the purest friendship, trust, love, whatever you want to call it – moment by moment through how you treat others.”

“We live in a world that has narrowed into a neighborhood before it has broadened into a brotherhood.”

“The mystical bond of brotherhood makes all men brothers.”

“You can’t hold a man down without staying down with him.” 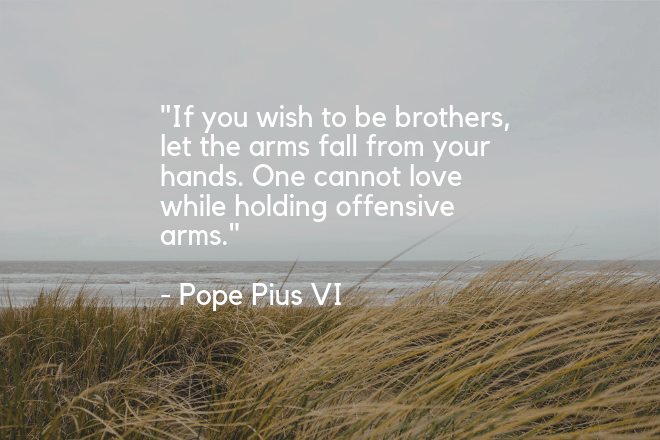 “If you wish to be brothers, let the arms fall from your hands. One cannot love while holding offensive arms.”

“Because brothers don’t let each other wander in the dark alone.”

“It is at times such as this that we show our true spirit of giving and of brotherhood – of revealing the good Samaritan in all of us.”

“Imagine no possessions, I wonder if you can, No need for greed or hunger, A brotherhood of man. Imagine all the people Sharing all the world.” 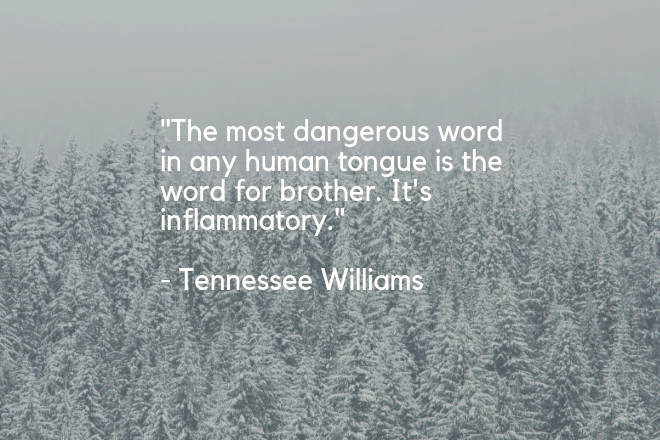 “The most dangerous word in any human tongue is the word for brother. It’s inflammatory.”

“You may call for peace as loudly as you wish, but where there is no brotherhood there can in the end be no peace.”

“Give bread to a stranger, in the name of the universal brotherhood which binds together all men under the common father of nature.”

“Sooner or later, all the peoples of the world will have to discover a way to live together in peace, and thereby transform this pending cosmic elegy into a creative psalm of brotherhood.”

There you have it:  50 of our favorite quotes about Brotherhood. What was your favorite?  Let us know down below!