Quotes about Sacrifice in Life

“There can be no progress, no achievement, without sacrifice, and a man’s worldly success will be in the measure that he sacrifices.”

“The important thing is this: to be ready at any moment to sacrifice what you are for what you could become.”

“There is no success without sacrifice.” “Success is no accident. It is hard work, perseverance, learning, studying, sacrifice and most of all, love of what you are doing or learning to do.”

“Nothing great was ever accomplished without making sacrifices.”

“Sacrifice is a part of life. It’s supposed to be. It’s not something to regret. It’s something to aspire to.”

― Mitch Albom, The Five People You Meet in Heaven

“Without pain, without sacrifice, we would have nothing.” 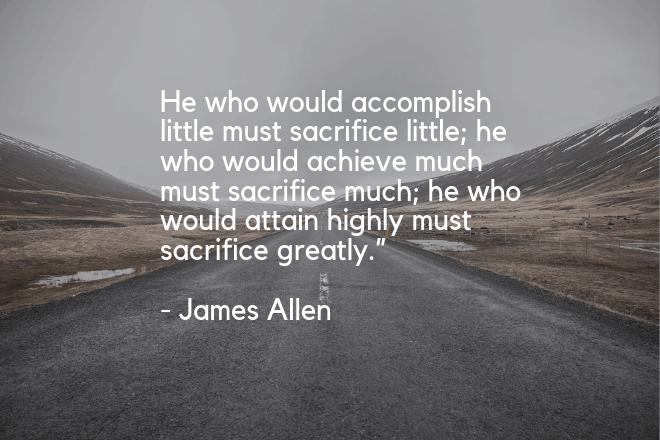 “Let us sacrifice our today so that our children can have a better tomorrow.”

“You can’t sleep. Broke people sleep. You got to be willing to sacrifice sleep, if you sleep you may miss the opportunity to be successful.”

“Great achievement is usually born of great sacrifice, and is never the result of selfishness.”

“Gentleness, self-sacrifice, and generosity are the exclusive possession of no one race or religion.”

“In some way, suffering ceases to be suffering at the moment it finds meaning, such as the meaning of sacrifice.”

“Don’t sacrifice who you could be for who you are.” 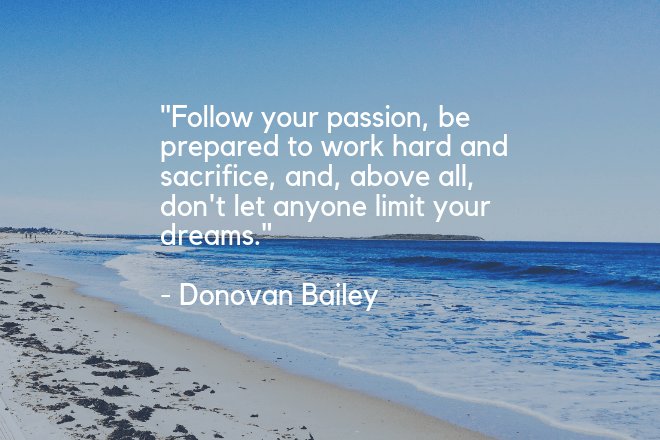 “Follow your passion, be prepared to work hard and sacrifice, and, above all, don’t let anyone limit your dreams.”

“Let us sacrifice one day in order to gain our whole lives, perhaps.”

“It’s what you let go of that determines how high you fly.”

“Peace demands the most heroic labor and the most difficult sacrifice.” 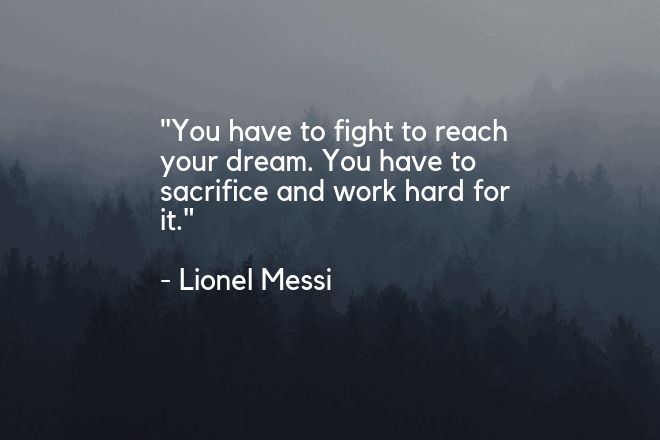 “You have to fight to reach your dream. You have to sacrifice and work hard for it.”

Quotes about Sacrifice in Relationships

“Love doesn’t please itself by seeking revenge. Love sacrifices itself for the good of others.”

“Love sacrifices all things to bless the thing it loves.”

“Sacrifices we make for others and that others make for us, result in blessings for all.” 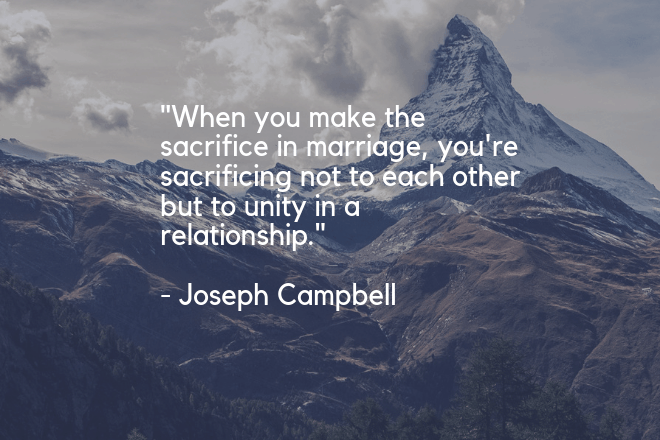 “When you make the sacrifice in marriage, you’re sacrificing not to each other but to unity in a relationship.”

“True love is selfless. It is prepared to sacrifice.”

“Men who fear to make the sacrifice of love will have to fight.”

“Sometimes when you sacrifice something precious, you’re not really losing it. You’re just passing it on to someone else.”

― Mitch Albom, The Five People You Meet in Heaven 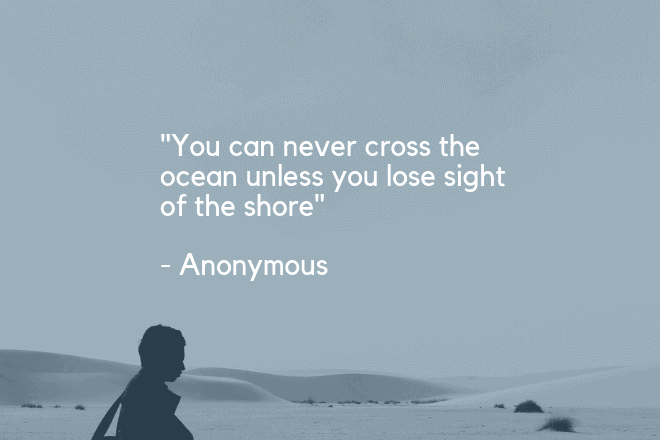 “Think now and then that there is a man who would give his life, to keep a life you love beside you.”

“The Sun loved the moon so much, it died every night to let her breathe.”

“I would rather be alone with dignity than in a relationship that requires me to sacrifice my self-respect.” 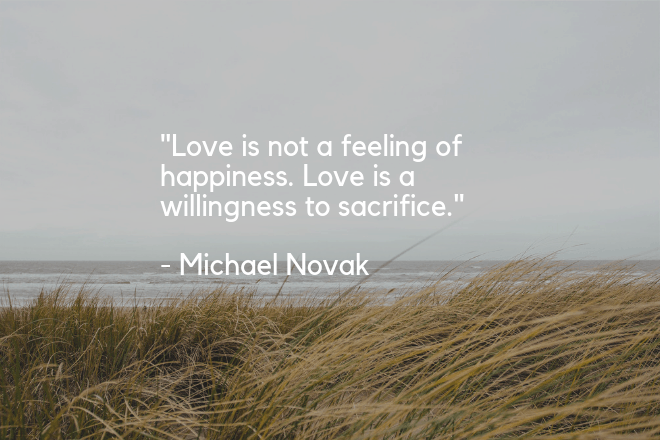 “Love is not a feeling of happiness. Love is a willingness to sacrifice.”

“You don’t have to do everything for someone; just do enough to make them feel you are their everything.”

“Sacrifice does not mean the rejection of the worthless, but of the precious”

“If you are not willing to risk the usual, you will have to settle for the ordinary.” 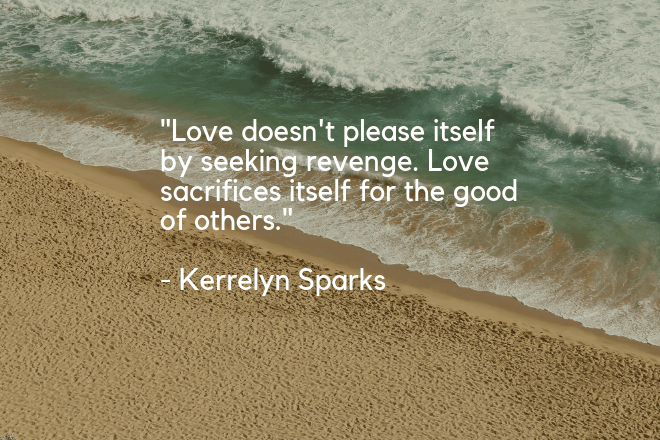 “Love doesn’t please itself by seeking revenge. Love sacrifices itself for the good of others.”

Quotes about Sacrifice in the Bible

The bible has many great quotes concerning sacrifice. Here are a few of the best we found.

“When Jesus heard this, He said to him, “One thing you still lack; sell all that you possess and distribute it to the poor, and you shall have treasure in heaven; and come, follow Me.”

“Honor the Lord with your wealth, with the first fruits of all your crops.”

“For you showed sympathy to the prisoners and accepted joyfully the seizure of your property, knowing that you have for yourselves a better possession and a lasting one.”

“Abba, Father,” he said, “everything is possible for you. Take this cup from me. Yet not what I will, but what you will.”

“But go and learn what this means: ‘I desire mercy, not sacrifice.’ For I have not come to call the righteous, but sinners.”

“For whoever wants to save their life will lose it, but whoever loses their life for me will save it.”

“Jesus said to him, “If you wish to be complete, go and sell your possessions and give to the poor, and you will have treasure in heaven; and come, follow Me.”

“He who did not spare his own Son, but gave him up for us all—how will he not also, along with him, graciously give us all things?”

“And all those who had believed were together and had all things in common; and they began selling their property and possessions and were sharing them with all, as anyone might have need.” 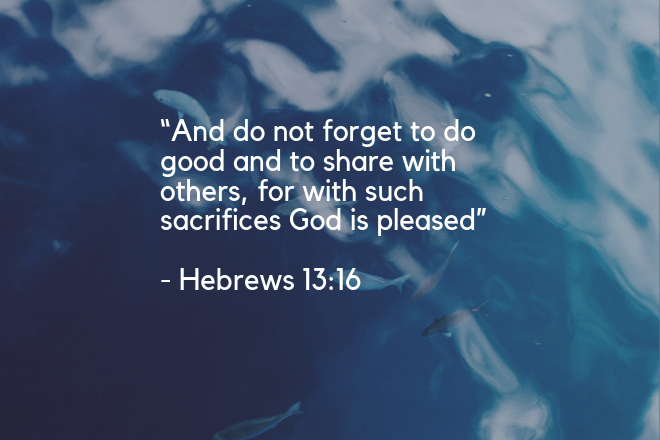 “And do not forget to do good and to share with others, for with such sacrifices God is pleased”

“Truly, truly, I say to you, unless a grain of wheat falls into the earth and dies, it remains alone; but if it dies, it bears much fruit. “He who loves his life loses it, and he who hates his life in this world will keep it to life eternal.

“And He was saying to them all, “If anyone wishes to come after Me, he must deny himself, and take up his cross daily and follow Me. “For whoever wishes to save his life will lose it, but whoever loses his life for My sake, he is the one who will save it.”

“For you showed sympathy to the prisoners and accepted joyfully the seizure of your property, knowing that you have for yourselves a better possession and a lasting one.”

“So Christ was sacrificed once to take away the sins of many; and he will appear a second time, not to bear sin, but to bring salvation to those who are waiting for him.”

“Truly, truly, I say to you, unless a grain of wheat falls into the earth and dies, it remains alone; but if it dies, it bears much fruit. “He who loves his life loses it, and he who hates his life in this world will keep it to life eternal. 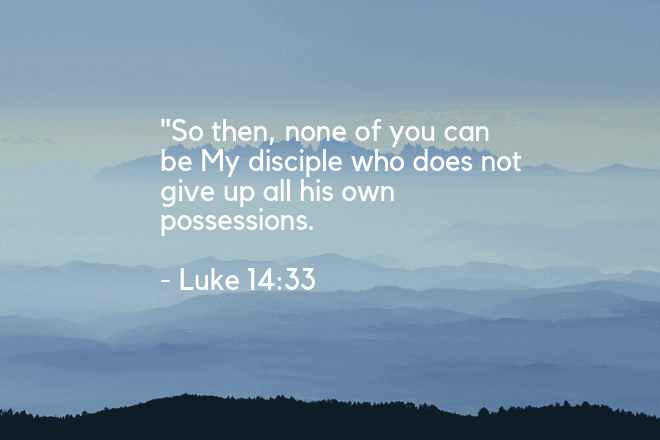 “So then, none of you can be My disciple who does not give up all his own possessions.

“But Samuel replied: ‘Does the Lord delight in burnt offerings and sacrifices as much as in obeying the Lord? To obey is better than sacrifice, and to heed is better than the fat of rams”

“Peter said, “Behold, we have left our own homes and followed You.” And He said to them, “Truly I say to you, there is no one who has left house or wife or brothers or parents or children, for the sake of the kingdom of God, who will not receive many times as much at this time and in the age to come, eternal life.”

“Have this attitude in yourselves which was also in Christ Jesus, who, although He existed in the form of God, did not regard equality with God a thing to be grasped, but emptied Himself, taking the form of a bond-servant, and being made in the likeness of men.” 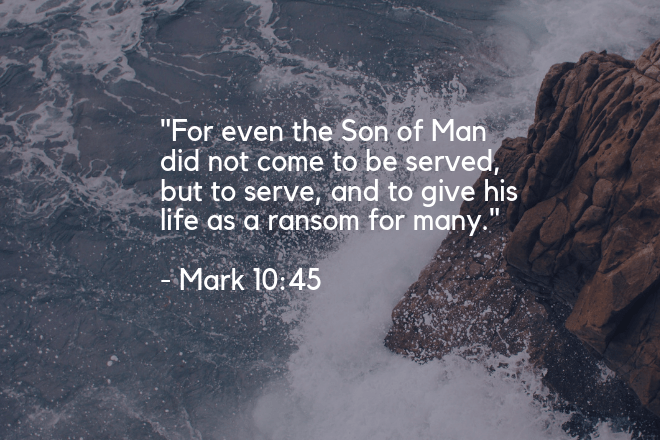 “For even the Son of Man did not come to be served, but to serve, and to give his life as a ransom for many.”

Which quote about sacrifice was your favorite?  Let us know below in the comments!