Sun Tzu was an ancient military commander and strategist from China. He is most known for his work, Sun Tzu’s Art of War. To this day, his works are still used in strategies for military warfare and business management.

Sun Tzu’s birthplace has been disputed by many scholars, but it is generally agreed that he lived somewhere from 722 – 481 BC.

He served under the King of Wu, King Helu. His victories on the war front have inspired him to write his famous book, the Sun Tzu Art of War. One of his famous victories was against the forces of Chu, in the battle of Boju, where he defeated his enemy through the effective use of deception.

One of his more well known stories from the Shiji was about how he trained 180 concubines of the King into officials. Because the King’s two favored concubines refused to obey his orders, he had them executed much to the protest of the king.

After the execution, the rest of the company obeyed his commands flawlessly. Such as the temperament of General Sun Tzu.

Although Sun Tzu’s leadership and strategy lessons can be learnt from much of the literature written about him today, here are some of his more famous teachings:

Sun Tzu believed deeply in the importance of knowing oneself and the enemy. He believed that if both could be achieved, one could attain perfect victories.

Good leaders know themselves very well; they understand their own strengths and weaknesses and they build a team around that understanding.  Your team should consist of people that are good at what you aren’t.

And of course, if you can understand your competitor’s strengths and weakness and play to them, it will be as Sun Tzu says: you will achieve a hundred victories in a hundred battles.

2. The use of deception

In warfare, Sun Tzu believed that the use of deception was essential to throw off the enemy. He knew that if the enemy was given false information, it would give Sun Tzu the element of surprise and first strike.

This knowledge will be useful to you if you are a business leader in a competitive industry. There is a lot of literature written about how you can use this principle to outsmart your competitors in the field of business by employing shrewd and cunning using the Art of War. 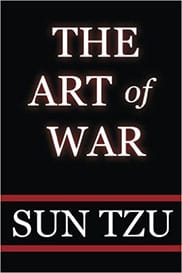 The Art Of War

This classic piece of Chinese philosophy resonates through time, transcending generations, leaving an echo of relevance no matter what the surroundings. Sun Tzu’s Art of War remains one of the most influential texts of all time. 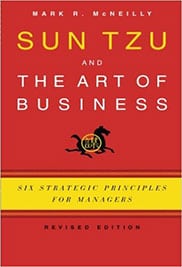 Sun Tzu and the Art of Business: Six Strategic Principles for Managers

The 2000-years-old masterpiece by Sun Tzu can be translated into all spheres of life. Mark McNeilly highlights the application of this ancient philosophy to modern day business strategy. 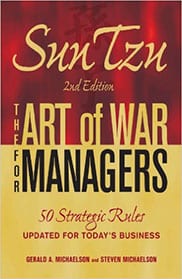 Getting ahead and succeeding in business can often be compared to the military tactics and war strategies used in great battlefields. Gerald A. Michaelson brings forth the wisdom of Sun Tzu that you can use to achieve success in today’s business world.

All men can see these tactics whereby I conquer, but what none can see is the strategy out of which victory is evolved.

All war is based on deception.

For them to perceive the advantage of defeating the enemy, they must also have their rewards.

He who is prudent and lies in wait for an enemy who is not, will be victorious.

If ignorant both of your enemy and yourself, you are certain to be in peril.

Pretend inferiority and encourage his arrogance.

Strategy without tactics is the slowest route to victory. Tactics without strategy is the noise before defeat.

Supreme excellence consists in breaking the enemy’s resistance without fighting.

The good fighters of old first put themselves beyond the possibility of defeat, and then waited for an opportunity of defeating the enemy.

If you are far from the enemy, make him believe you are near.

In the practical art of war, the best thing of all is to take the enemy’s country whole and intact; to shatter and destroy it is not so good.

Prohibit the taking of omens, and do away with superstitious doubts. Then, until death itself comes, no calamity need be feared.

Regard your soldiers as your children, and they will follow you into the deepest valleys; look on them as your own beloved sons, and they will stand by you even unto death.

Secret operations are essential in war; upon them the army relies to make its every move.

Invincibility lies in the defense; the possibility of victory in the attack.

It is only the enlightened ruler and the wise general who will use the highest intelligence of the army for the purposes of spying, and thereby they achieve great results.

Know thy self, know thy enemy. A thousand battles, a thousand victories.

The general who advances without coveting fame and retreats without fearing disgrace, whose only thought is to protect his country and do good service for his sovereign, is the jewel of the kingdom.

The quality of decision is like the well-timed swoop of a falcon which enables it to strike and destroy its victim.

The skilful employer of men will employ the wise man, the brave man, the covetous man, and the stupid man.

Opportunities multiply as they are seized.

The enlightened ruler is heedful, and the good general full of caution.

The supreme art of war is to subdue the enemy without fighting.

A feature on Sun Tzu and the Art of War: