Sir Richard Branson is an English business mogul and investor. He co-founded the Virgin Group, now a multinational brand with over 400 businesses in various industries such as entertainment, travel and lifestyle. Branson is known for his risk-taking approach as an entrepreneur and his flamboyant style.

The flamboyance and force of Branson’s personality has meant that he is synonymous with the Virgin brand. He is unapologetically enthusiastic about promoting himself and his businesses, and is always up for outrageous attention-grabbing marketing.

Whether it’s wearing a spacesuit at the launch of Virgin Galactic, jumping off the Palms hotel in Vegas, or dressing in drag after losing a bet with AirAsia CEO Tony Fernandes, Branson’s personal brand as an adventurous, up-for-anything CEO is an integral part of Virgin’s appeal. In a world where companies tend to take a serious approach to their branding, his sense of fun permeates the Virgin brand and attracts customers.

What is your personal brand? How do others perceive you, and can you use that in a positive way to increase your influence as a leader? What value do you provide your team and your customers? If you build a personal brand that is authentic to you and your values, people will gravitate towards you and what you offer to the world.

Branson’s success can be attributed to his willingness to take risks. He once said, “treat failure as a lesson on how not to approach achieving a goal, and then use that learning to improve your chances of success when you try again. Failure is only the end if you decide to stop.”

This Business Insider article lists 15 of his business failures, from Virgin Brides to Virgin Cola to Virgin Lottery. Branson was never afraid to set his foot in a new industry or to attempt to challenge big established brands. Instead, he was driven to take those risks as he felt there was room to better serve customers in that industry.

Branson’s fearlessness and resilience is something that all leaders can learn from. To break new ground in your work, move out of your comfort zone and do things differently! Taking risks can lead to exponential progress for you and your team. And if it doesn’t work out, use it as a learning experience for your next move.

Branson recognizes that learning to listen well is an important skill for a leader. He knows that a leader cannot work in isolation, and that feedback from the team can help put attention on any blind spots that the leader may have.

The ability to listen to your employees also helps build deeper connections with them. Listening well improves communication and understanding, which makes it easier to people to work together and achieve common goals.

The next time you’re speaking with a team member, take a moment and evaluate your communication style. Do you talk or listen more? What can you do to be more present in the moment? What can you do to empathise more and judge less? Here are some of our tips on how to improve your listening skills.

Who is Richard Branson: A Short Biography

Richard Branson was born on July 18th, 1950 in London. He had dyslexia and had a difficult time in school. This led to him dropping out of school at age 16. He started a magazine for youth, by youth called ‘Student’, which was his first entrepreneurial venture.

In 1970, he got the idea to start a mail-order record company; it was successful enough that he then opened a record store in London. This would be the beginnings of Virgin Megastores, Branson’s chain of music stores. His next venture was a music label, Virgin Records, which was started in 1973. As an independent label, Virgin Records signed controversial acts such as the Sex Pistols, Genesis and the Culture Club, and grew to become of one of the top labels in the world.

Branson continued to expand his business interests into other industries. Among them, he founded Virgin Atlantic Airways in 1984, Virgin Publishing in 1991, and Virgin Mobile in 1999. One of his latest ventures is Virgin Galactic, a company that manufactures rockets and develops commercial spacecraft with the aim of making space tourism possible.

Along the way, he encountered some setbacks, notably when Virgin Airways hit a rough patch in the early 1990s. Branson had to sell Virgin Records to Thorn-EMI, a move that brought him to tears. This incident changed his business approach to one he calls “branded venture capital”, wherein wealthy investors put in the capital for a new business and Branson licenses the Virgin brand name and manages the company.

This strategy has proven to be massively successful for Branson. Today, the Virgin Group is a multinational brand with over 400 businesses in various industries such as entertainment, travel and lifestyle. The company has over 70,000 employees worldwide and earned a revenue of US$24 billion in 2015.

Aside from his entrepreneurship, Branson is known for his philanthropy and support for humanitarian and ecological causes. He is also famous for engaging in outrageous publicity stunts for his businesses.

In 1999, Branson was knighted for his contribution to entrepreneurship. 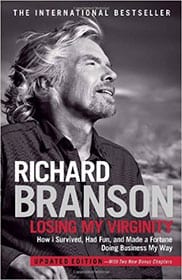 Losing My Virginity: How I Survived, Had Fun, and Made a Fortune Doing Business My Way

This controversial and captivating autobiography brings us closer to the man behind some of the most successful global ventures. Hear Richard Branson’s fascinating story in his own words. 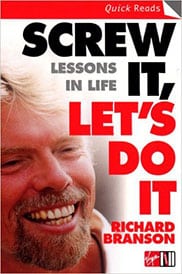 Screw It, Let’s Do It: Lessons In Life (Quick Reads)

It may seem unbelievable, ridiculous and even outrageous, but this short and simple saying is one of the key elements behind Richard Branson’s amazingly successful career. In this short but sweet book, Richard Branson reveals 50 of the most important life lessons that propelled him to glory. 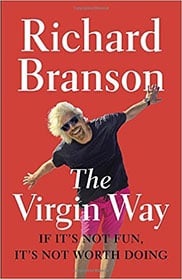 The Virgin Way: If It’s Not Fun, It’s Not Worth Doing

The man who had enough courage, ambition, luck and was just crazy enough to go against them all; Richard Branson shows us his unique perspective on leadership and success.

If you liked this article, check our Top 17 Leadership Quotes from Richard Branson.