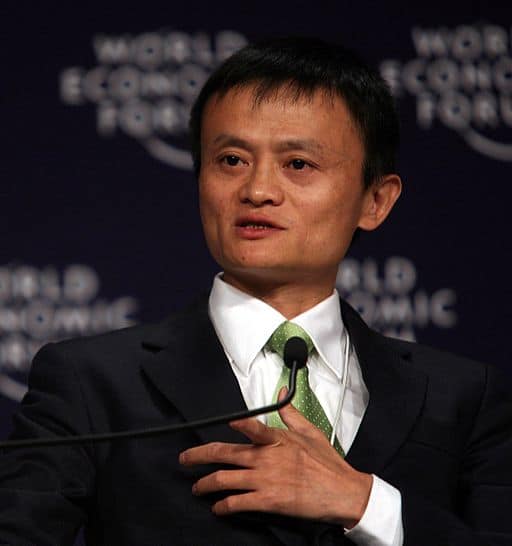 Jack Ma is a Chinese business magnate, known as the founder of the e-commerce giant, Alibaba. He is currently the executive chairman of the Alibaba Group, a holding company for various online sales portals, which earns more than Amazon and eBay combined. Ma is the richest man in China, with an estimated net worth of US$26.8 billion (as of Feb 2017).

Jack Ma was born in Hangzhou, China on 10th September 1964. As a child, Ma was inspired to learn English and taught himself. He was dedicated to improving his English; for nine years, he conversed with tourists at the Hangzhou Hotel, gave them free city tours and even became pen pals with some of the people he met. It was during this time that he got the nickname ‘Jack’ as foreigners had difficulty pronouncing his Chinese name (Ma Yun).

As a young adult, Ma had to take the Chinese entrance exams twice before he qualified to attend college. He eventually studied at the Hangzhou Teacher’s Institute where he earned a B.A. in English. After graduation, Ma struggled to find a job. Reportedly, he applied for 30 jobs and was rejected for all. He also applied to study at Harvard and got rejected all 10 times.

Undeterred by the rejections, Ma found an avenue to build his own company when he learned about the Internet during a visit to the United State in 1995. He saw a gap in the online market for information on China and Chinese companies and considered it a good business opportunity. In April 1995, Ma founded “Chinapages”, a company that listed Chinese companies and products. The venture proved to be successful, earning CN¥5,000,000 (USD$800,000) within 3 years. Ma then partnered with a government entity, hoping to get better funding — instead, the partnership brought bureaucracy which hindered further growth. He eventually left the company.

In 1999, Ma founded another company, this time a China-based business-to-business marketplace. Named Alibaba, the company was started with an initial investment of CN¥500,000. Alibaba then won $25 million in foreign venture capital investment, which allowed it to expand and grow. Ma became committed to improving the global e-commerce market and founded other companies such as Alipay and Taobao. Alibaba’s exponential growth led to a $25 billion initial public offering on the New York Stock Exchange in 2014, which made it one of the most highly-valued tech companies in the world.

Ma continues to shape the growth and development of e-commerce as executive chairman of the Alibaba Group, which earned an annual revenue of CN¥101.143 billion in 2016. As of April 2016, Alibaba has surpassed Walmart as the largest retailer in the world.

Ma’s list of rejections and setbacks show how he is undaunted when faced with failure. Whether it’s retaking exams until he passed, applying for jobs, or trying different business ventures, his perseverance in the face of obstacles is immense. This attitude can be attributed not just in his belief that he can make something of himself but also a sense that he would like to leave a real impact on the world.

For instance, during Alibaba’s early days, Ma sought funding from Silicon Valley but failed – instead, he received criticism saying that his business model was not viable and that it would not be profitable. However, Ma strongly believed in his vision behind the company and knew that it could change the business landscape not just for Chinese companies but e-commerce around the world. Although he left Silicon Valley without securing any investors, Alibaba eventually won $25 million in investment from Goldman Sachs and SoftBank. Imagine if Ma had given up after the rejections in Silicon Valley!

Leaders constantly face difficulties and obstacles during the course of their careers; it’s those who stay the course and remain committed to their goals that experience success. Consider your own goals and what you would sacrifice in order to achieve them. How would you rate your perseverance level? What can you do to become more resilient in the face of rejection and failure?

2. Take risks – ideas are nothing without action!

“If you don’t do it, nothing is possible. If you do it, at least, you have the hope that there’s a chance.”

Many of us have great ideas, but lack the motivation or drive to execute them. But even the best idea amounts to nothing if you don’t act on them. In 1995, Ma saw the potential for an internet-based venture for Chinese companies – the fact that he dared to execute that idea is what set him on the path to success. Similar, his vision to transform the way business is done in China ultimately led him to start Alibaba, which revolutionised e-commerce and opened the Chinese market to the global businesses.

Ma embarked on his ventures with little business experience (he was an English teacher before he became an entrepreneur) and technical know-how. But he believed deeply in what he wanted to achieve and was willing to take risks to see his ideas come to life.

As a leader, you’re probably brimming with ideas on how to improve the way things are done, better motivate your team or increase customer satisfaction. Be willing to raise your ideas to decision-makers, so that they can be put into action and make a difference in the organization. Creativity and innovation are necessary for personal and organizational growth — so put yourself out there and execute your ideas!

“I find that when a person makes a mistake or fails, if he or she always complains or blames others, that person will never come back from the failure. But if the person checks inside, this person has hope.”

The secret to Ma’s resilience is his ability to take personal responsibility for his mistakes. When faced with failure, he takes the attitude of learning from it and reframing failure as an opportunity to change or improve himself. This allows him to keep moving forward and look for new opportunities, instead of dwelling on past mistakes and remaining stagnant in a bad situation.

This introspective approach leads to personal growth and the ability to take on bigger challenges as one learns from past mistakes and builds tenacity. Taking personal responsibility also gives one the sense that taking action will lead to change, which is an empowering mindset to have.

Great leaders have a strong sense of personal responsibility that gives them the credibility to lead from the front. Their example instills confidence in their team to work together to achieve lofty goals, as evidenced by Ma and his team at Alibaba. Take some time to reflect on your leadership style, and how you can take more personal responsibility in your work and relationships with others. It’s important to be honest with yourself so that you can work on your weaknesses and develop into a stronger leader.

“A leader should have higher grit and tenacity, and be able to endure what the employees can’t.”

“I want to change history, do something important in my life, and influence individuals like we have with millions of small businesses on Alibaba. Then they love and respect you because you made their life important.”

“Intelligent people need a fool to lead them. When the team’s all a bunch of scientists, it is best to have a peasant lead the way. His way of thinking is different. It’s easier to win if you have people seeing things from different perspectives.”

“You need the right people with you, not the best people.”

“It doesn’t matter if I failed. At least I passed the concept on to others. Even if I don’t succeed, someone will succeed.”

“You should learn from your competitor, but never copy. Copy and you die.”

“If you’ve never tried, how will you ever know if there’s any chance?”

“If you don’t give up, you still have a chance. Giving up is the greatest failure.”

“We’re never in lack of money. We lack people with dreams, (people) who can die for those dreams.”

“The lessons I learned from the dark days at Alibaba are that you’ve got to make your team have value, innovation, and vision. Also, if you don’t give up, you still have a chance. And, when you are small, you have to be very focused and rely on your brain, not your strength.”

“If we are a good team and know what we want to do, one of us can defeat ten of them.”

“The business schools teach a lot of skills about how to make money and how to run a business. But I want to tell people that if you want to run a business, you have to run the value first, to serve the others, to help the others – that’s the key.”

Watch this video where Jack Ma talks about what he feels is important in leadership: