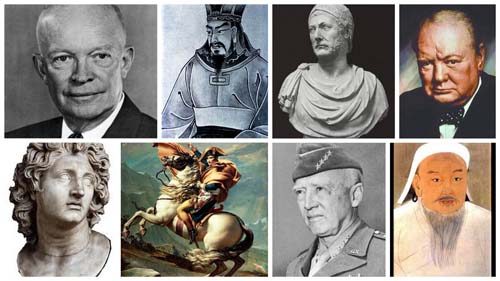 Wars have long shaped human history, and have often been an arena wherein great men and leaders show their mettle. Our military leadership profiles look at some of those great military leaders and strategists who conquered and defended nations, and consequently changed the course of world history.

In each military leadership profile, you will find:

Napoleon was one of the greatest conquerors in the history of the modern world. His rise came in a time of chaos, during the French Revolution.

Sir Winston Churchill was a British political leader known for his leadership of the United Kingdom during World War II. He was instrumental in turning the tide of battle against the Axis Forces in Europe.

Dwight D Eisenhower was World War II Allied Forces Supreme Commander in Europe. He commanded the Allied Forces in the invasion against the Nazis. It was his superb leadership, planning and commanding ability that contributed to Allied success in World War II.

Alexander The Great was one of history’s greatest conquerors. Born as heir to the Macedonian King, his great ambition led him to take on the mighty Persian Empire. At its height, Alexander’s empire stretched all the way from modern day Italy to the Himalaya.

George Smith Patton, Jr. was a United States Army officer best known for his leadership as a general during World War II. During the war, he successfully defeated Nazi Germany on many battlefronts with his unique blitzkrieg military strategies.

Hannibal Barca was a military commander of the Carthage army. He led a famous campaign in the second Punic War against the Roman army, where he remained undefeated until the gates of Rome. His most famous military accomplishment was the battle of Cannae, where he defeated a Roman army double the size of his.

Colin Powell is an American statesman and a retired four-star general of the United States Army. He was the 65th United States Secretary of State serving under President George W. Bush. He also served as the Chairman of the Joint Chiefs of Staff during the Gulf War.

Sun Tzu was an ancient military commander and strategist from China. He is most known for his treatise on military strategy, The Art of War. To date, his works are used in strategies for military warfare and business management.