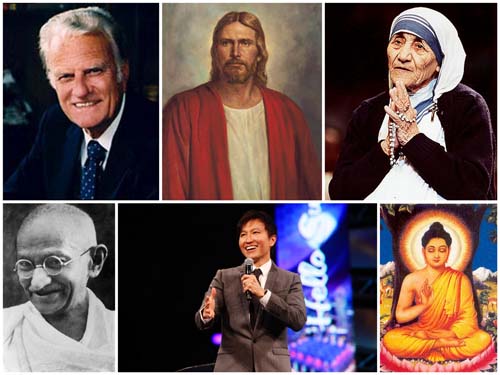 In this section, we look at spiritual leaders who have inspired, influenced and even changed the thoughts, beliefs and values of their age.

In each spiritual leadership profile, you will find:

Mahatma Gandhi was a political and spiritual leader of India. Through his cause, he helped India gained its independence and is honored in India as the Father of the Nation.

Jesus Christ is the Son of God, as known by Christianity. He lived in ancient Israel in the first century and is known by many as the Son of God. Christians believe that Christ was crucified on the cross for all of mankind’s sins; that he died, was buried and was resurrected.

Buddha is the founder of Buddhism, also known by many as the “enlightened one”. According to history, he achieved enlightenment under a Bodhi Tree after 49 days of meditation. He then travelled throughout Nepal and India to preach the Way.

Kong Hee is the founder, honorary and volunteer senior pastor of City Harvest Church in Singapore. Kong has a philosophy of ministry that emphasizes the Great Commandment, Great Commission, and Cultural Mandate.

Billy Graham is one of the top preachers and evangelists of the 20th century. Throughout his crusades all over the world, it is estimated he has led over 2.5 million souls to Jesus Christ.