You are at:Home»Movies»Leadership Movies: Braveheart

Braveheart is a part of Leadership Movies, a series of films with leadership themes. Learn about how you can become a better leader by watching leadership in action. 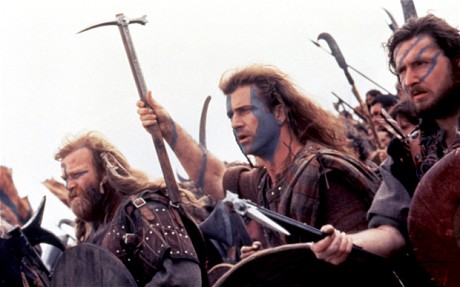 Braveheart is a 1995 historical action-drama movie produced, directed and starred by Mel Gibson. Gibson portrays a legendary Scot, William Wallace, who gained recognition when he came to the forefront of the First War of Scottish Independence by opposing Edward I of England.

1. Fight for your Freedom at all costs
Your personal freedom comes at a price and you must be ready to fight for it. Braveheart saw that the freedom of his people was far more important than their very lives.

2. Never compromise on your values
Braveheart could have chose to submit to the English upon capture but he never compromised till his last breath. He believed everything he said.

3. Every man will die eventually, but not every man will live
To choose to live everyday is a choice. Eventually all of us will die, so we should never let the fear of death stop us from living.

“Every man dies. Not every man truly lives.” – William Wallace

“Here are Scotland’s terms. Lower your flags, and march straight back to England, stopping at every home you pass by to beg forgiveness for 100 years of theft, rape, and murder. Do that and your men shall live. Do it not, and every one of you will die today.” – William Wallace speaks to the English negotiators despite being outnumbered and outclassed

“Now tell me, what does that mean to be noble? Your title gives you claim to the throne of our country, but men don’t follow titles, they follow courage. Now our people know you. Noble, and common, they respect you. And if you would just lead them to FREEDOM, they’d follow you. And so would I.” – William Wallace responds to Robert the Bruce

“Aye, fight and you may die, run, and you’ll live… at least a while. And dying in your beds, many years from now, would you be willing to trade ALL the days, from this day to that, for one chance, just one chance, to come back here and tell our enemies that they may take our lives, but they’ll never take… OUR FREEDOM!” – William Wallace speaks to his army on the eve of battle

Return from Braveheart to Leadership Movies