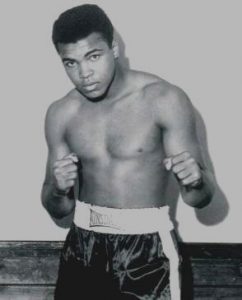 Three-time World Heavyweight Champion Muhammad Ali was considered one of the world’s greatest boxers. His professional record of 56 wins and 5 losses is unprecedented. After retirement, he traveled the world as an ambassador of peace, and championed social causes like ending poverty and discrimination. He passed away on June 3rd, 2016.

At age 12, Cassius was discovered by a boxing coach. He trained under various coaches as an amateur boxer and had an amazing record of 100 wins to 5 losses. He became a professional boxer after winning the Summer Olympics gold medal in 1960.

He took the name Muhammad Ali after converting to Islam at age 22.

Ali had a unique fighting style. He did not adopt the high arm guard, but instead relied on his speed to avoid opponent’s punches. “Float like a butterfly, sting like a bee,” as he used to say.

More than technique, he had incredible belief in himself. He never believed that he would lose a fight, and used his words to either taunt his opponent or ‘predict’ his defeat by calling out the round which his opponent would be knocked out.

Ali had an extremely successful professional boxing career; he suffered only 5 defeats, with 56 wins and over half of them knock-outs. During his career Ali defeated every top heavyweight (an era which has been called the Golden Age of heavyweight boxing).

After his retirement, he traveled around the world to fight for humanitarian causes such as poverty, hunger and racism.

Muhammad Ali’s physical skill in the ring wasn’t his only advantage. One of his greatest assets was his belief in himself and his abilities. His life was a testimonial of how far self-belief and affirmation can carry oneself. Ali has often said that he began believing he was the greatest before he became the greatest.

As leaders, it’s important to cultivate self-belief as well. It’s crucial to not just think, but know that we are more than capable for the task before us. Before you can achieve victory on the outside, you have to achieve the victory on the inside.

Muhammad Ali not only believed in himself, he constantly articulated his vision for his future. Before he fought an opponent, Ali would not only tell an opponent he would be beaten by knockout, he would even ‘predict’ the round.

While Ali’s predictions were used to intimidate his opponents, the principle is sound. The power of a leader is his ability to envision the future, and to couple that vision with the self-belief to see it through. Whatever you want to see happen in your life and in your organization, start by envisioning it and then articulate it to your team.

Muhammad Ali believed that a fight was won not in the boxing ring, but in the time spent preparing for the match. As he famously said, “The fight is won or lost far away from witnesses – behind the lines, in the gym, and out there on the road, long before I dance under those lights.”

This is the principle of preparation: 90% of the battle is won not when you’re fighting, but before you even step in the ring.

Whether you’re speaking in public or leading your organization, your success or failure has already been predetermined by the time you spent preparing for it. How can you train to be the best at what you do? What can you practice daily to win the match before it begins?

The Greatest: My Own Story

The hero’s journey, in his own words.

King of the World: Muhammad Ali and the Rise of an American Hero

Pulitzer prize-winning author David Remnick captures the amazing career and personal life of Muhammad Ali like no other book.

The Soul of a Butterfly: Reflections on Life’s Journey

Ali’s boxing career was just one aspect of a complicated and caring man. This book, written by Ali, looks at spirituality, religious tolerance, and much of his life after stepping out of the ring for the last time.

“I figured that if I said it enough, I would convince the world that I really was the greatest.”

“The fight is won or lost far away from witnesses – behind the lines, in the gym, and out there on the road, long before I dance under those lights.”

“Hating people because of their color is wrong. And it doesn’t matter which color does the hating. It’s just plain wrong.”

“Age is whatever you think it is. You are as old as you think you are.”

“A man who views the world the same at fifty as he did at twenty has wasted thirty years of his life.”

“He who is not courageous enough to take risks will accomplish nothing in life.”

“I never thought of losing, but now that it’s happened, the only thing is to do it right. That’s my obligation to all the people who believe in me. We all have to take defeats in life.”

“I wish people would love everybody else the way they love me. It would be a better world.”

“I’m not the greatest; I’m the double greatest. Not only do I knock ’em out, I pick the round.”

“It’s lack of faith that makes people afraid of meeting challenges, and I believed in myself.”

“It’s not bragging if you can back it up.”

“It’s the repetition of affirmations that leads to belief. And once that belief becomes a deep conviction, things begin to happen.”

“Life is a gamble. You can get hurt, but people die in plane crashes, lose their arms and legs in car accidents; people die every day. Same with fighters: some die, some get hurt, some go on. You just don’t let yourself believe it will happen to you.”

“To be able to give away riches is mandatory if you wish to possess them. This is the only way that you will be truly rich.”

“We have one life; it soon will be past; what we do for God is all that will last.”

“I hated every minute of training, but I said, “Don’t quit. Suffer now and live the rest of your life as a champion.”

“I know where I’m going and I know the truth, and I don’t have to be what you want me to be. I’m free to be what I want.”

“What keeps me going is goals.”

“Old age is just a record of one’s whole life.”

“Only a man who knows what it is like to be defeated can reach down to the bottom of his soul and come up with the extra ounce of power it takes to win when the match is even.”

“If they can make penicillin out of moldy bread, they can sure make something out of you.”

“If you even dream of beating me you’d better wake up and apologize.”

“It isn’t the mountains ahead to climb that wear you out; it’s the pebble in your shoe.”

“Service to others is the rent you pay for your room here on earth.”

“The man who has no imagination has no wings.”

Watch “What’s My Name” by The New York Times: