At the time of her death in 1998, the Missionary of Charities was in operation in over 100 countries which included hospices, homes, orphanages and schools.

Mother Teresa was born in 26 August 1910 in Uskub, Ottoman Empire. Her father was involved in Albanian politics but he died of illness when Teresa was only 8 years old.

In her youth, she was very enthralled by stories of missionaries and ministers and she aspired to become like them when she grew up. At the age of 18, she left home to join the Sisters of Loreto as a missionary.

She first went to Ireland to learn English before return to India to teach in a convent school. However, she was disturbed by the poverty surrounding her in Calcutta.

She felt the call to minister to the poor, and she left the comfort of her nunnery in 1948 and into the slums. She first started a school, and then started tending to the needs of the poor. She sacrificed even the promise of the basic necessities in the nunnery and lived her life very much like the poor and destitute people in the streets.

Her work was noticed by many Indian officials, and they appreciated her efforts.

By 2007 the Missionaries of Charity numbered approximately 450 brothers and 5,000 nuns worldwide, operating 600 missions, schools and shelters in 120 countries.

She would suffer her first heart attack in 1983, and she would go on to have another health issues, all the way till March 1997 when she finally stepped down from her leadership position and she passed away in September 5, 1997.

1. Faithfulness is more important than the Big Dream

Most leadership literature talks about having the big vision or big dream you want to achieve, but Mother Teresa focuses on faithfulness in the smallest things. While we think about loving the whole world, she urges us to love our neighbor. While we aspire to do great things, she focuses on doing small things with love.

Instead of focusing on what big things that your organization can accomplish tomorrow, it may be better to focus on the simple daily tasks that you and your team is tasked to do.

Are you already doing the tasks given to you faithfully and with excellence? Ultimately, it is these small things that will determine if you will achieve anything big in your life.

2. Give of yourselves fully

Mother Teresa gave everything she had of herself and became a world changer and a history maker. At some point in her life, she decided that the needs of the poor people in India was far more important than her comfort level, and it launched her into her work of ministering to the poor, sick and destitute.

The more you are willing to sacrifice and give up of yourself, the greater fruits you will see in your life. This is the principle of sowing and reaping. The more you sow in terms of your effort, time and money, the more you will reap in your life. Mother Teresa gave herself fully to alleviate the poverty around her by touching one life at a time, and she accomplished so much by the end of her life.

Mother Teresa has given us much more life lessons than just these; if you read her quotes, watch her videos, perhaps you will receive something more from her about your perspective on life as well. 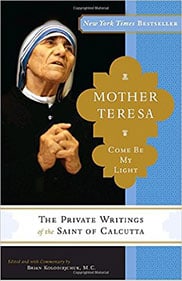 Mother Teresa: Come Be My Light: The Private Writings of the Saint of Calcutta

Mother Teresa is name that has become synonymous with kindness, compassion and benevolence. Some of the never-before-seen letters she wrote are now available in this fascinating read about her captivating spiritual journey to sainthood. 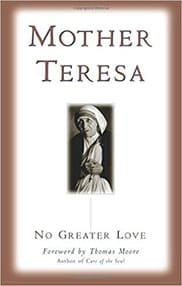 Mother Teresa had one of the most profoundly moving and revolutionary interpretations of christianity. No Greater Love shows us a glimpse of her life and vision that changed the world of faith.

Author Kathryn Spink provides us with a thorough, sensitively written, and utterly inspiring biography of the woman who needs no introduction; Mother Teresa. Learn all about the life and work of one of the greatest figures in the history of Christianity.

One of the greatest diseases is to be nobody to anybody.

Sweetest Lord, make me appreciative of the dignity of my high vocation, and its many responsibilities. Never permit me to disgrace it by giving way to coldness, unkindness, or impatience.

We, the unwilling, led by the unknowing, are doing the impossible for the ungrateful. We have done so much, for so long, with so little, we are now qualified to do anything with nothing.

Be faithful in small things because it is in them that your strength lies.

There is always the danger that we may just do the work for the sake of the work. This is where the respect and the love and the devotion come in – that we do it to God, to Christ, and that’s why we try to do it as beautifully as possible.

There must be a reason why some people can afford to live well. They must have worked for it. I only feel angry when I see waste. When I see people throwing away things that we could use.

We can do no great things, only small things with great love.

I am a little pencil in the hand of a writing God who is sending a love letter to the world.

I do not pray for success, I ask for faithfulness.

We ourselves feel that what we are doing is just a drop in the ocean. But the ocean would be less because of that missing drop.

Do not think that love, in order to be genuine, has to be extraordinary. What we need is to love without getting tired.

Our life of poverty is as necessary as the work itself. Only in heaven will we see how much we owe to the poor for helping us to love God better because of them.

Peace begins with a smile.

Do not wait for leaders; do it alone, person to person.

Even the rich are hungry for love, for being cared for, for being wanted, for having someone to call their own.

God doesn’t require us to succeed; he only requires that you try.

I have found the paradox, that if you love until it hurts, there can be no more hurt, only more love.

If you can’t feed a hundred people, then feed just one.

We shall never know all the good that a simple smile can do.

Being unwanted, unloved, uncared for, forgotten by everybody, I think that is a much greater hunger, a much greater poverty than the person who has nothing to eat.

If you judge people, you have no time to love them.

If you want a love message to be heard, it has got to be sent out. To keep a lamp burning, we have to keep putting oil in it.

Intense love does not measure, it just gives.

The miracle is not that we do this work, but that we are happy to do it.

We think sometimes that poverty is only being hungry, naked and homeless. The poverty of being unwanted, unloved and uncared for is the greatest poverty. We must start in our own homes to remedy this kind of poverty.

It is not the magnitude of our actions but the amount of love that is put into them that matters.

Jesus said love one another. He didn’t say love the whole world.

Joy is a net of love by which you can catch souls.

Kind words can be short and easy to speak, but their echoes are truly endless.

Let us always meet each other with smile, for the smile is the beginning of love.

It is a kingly act to assist the fallen.

Let us more and more insist on raising funds of love, of kindness, of understanding, of peace. Money will come if we seek first the Kingdom of God – the rest will be given.

Let us not be satisfied with just giving money. Money is not enough, money can be got, but they need your hearts to love them. So, spread your love everywhere you go.

Let us touch the dying, the poor, the lonely and the unwanted according to the graces we have received and let us not be ashamed or slow to do the humble work.

I know God will not give me anything I can’t handle. I just wish that He didn’t trust me so much.

I try to give to the poor people for love what the rich could get for money. No, I wouldn’t touch a leper for a thousand pounds; yet I willingly cure him for the love of God.

If we have no peace, it is because we have forgotten that we belong to each other.

Love begins by taking care of the closest ones – the ones at home.

Love is a fruit in season at all times, and within reach of every hand.

Many people mistake our work for our vocation. Our vocation is the love of Jesus.