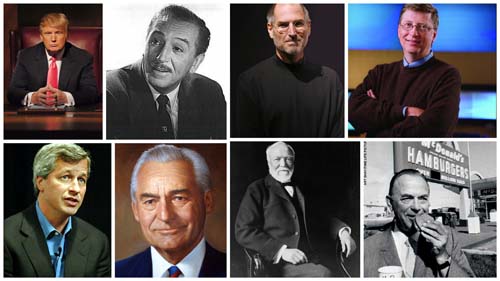 Business is a proving ground for many a great leader, and the corporate world is full of examples of both leadership successes and failures. In this section, we profile successful and inspirational business leaders. We take a closer look at men and women who have made an impact with their leadership — changing the face of how we do business, and in some cases, how we live.

In each business leadership profile, you will find:

Jamie Dimon is the current CEO, Chairman and President of JP Morgan Chase & Co, the largest of the Big Four banks in the United States.

Steve Jobs was the co-founder, Chairman and CEO of Apple Inc. and arguably one of the world’s most successful and innovative businessmen.

Bill Gates is consistently the richest man in the world, with an estimated net worth of US$90 billion in 2016. He is best known for founding Microsoft and revolutionizing the computer industry.

Ray Kroc was the man behind the multimillion-dollar fast food empire, McDonald’s. He grew the fast food chain from a simple hamburger restaurant into a multi-billion dollar franchise that has expanded to nearly every part of the world today.

Andrew Carnegie is known as the father of modern steel and was one of America’s richest men. He founded the Carnegie Steel Company, which later became the U.S. Steel Corporation. He is well-known for creating philanthropic organizations dedicated to the causes such as world peace and education.

Walt Disney was the founder of Mickey Mouse, the loveable cartoon character that has permeated almost every country and culture in the world. He was the co-founder of Walt Disney Productions was one of the most influential motion picture producers in the world.

Henry Ford was the founder of the Ford Motor Company and an inventor who has been credited with over 100 patents. During his time, he was one of the richest people in the world.

Sam Walton was the founder of Walmart, the American retail giant that operates supermarkets, discount department stores and hypermarkets.

Donald Trump is an American business magnate and television personality. He is the Chairman of the Trump Organization, a US-based real-estate developer. He is the Republican nominee for President in 2016.

John D Rockefeller is an American oil magnate and the first billionaire in the history of the world. In today’s dollars, Rockefeller is still considered the richest man in modern history. He was also one of the first major American philanthropists, giving back a huge portion of his wealth to the community.

Warren Buffett is one of the world’s richest men, with assets totaling up to US$66 billion as of 2016. His main source of wealth is his company Berkshire Hathaway, a conglomerate holding company headquartered in Omaha, Nebraska. His philosophy of value investing and prudence has influenced many investors worldwide.

» Sheryl Sandberg
Sheryl Sandberg is the current Chief Operating Officer of Facebook, and one of the top women leaders in the technology industry. Fortune magazine has named her of the 50 Most Powerful Women in Business (#10 in 2014).

» Indira Nooyi
Indira Nooyi is the current Chairperson and Chief Executive Officer of PepsiCo, the world’s second largest food & beverage manufacturer based on revenue. She is PepsiCo’s first female CEO.

» Elon Musk
Elon Musk is a business mogul, engineer and inventor, best known for founding and leading SpaceX (a company that aims to lower the costs of building rockets with the ultimate goal of multi-planetary colonization by humans) and Tesla Motors (a company that produces electric cars). He is considered a visionary business leader who is advancing technology in areas such as space exploration and sustainable energy.

» Jeff Bezos
Jeff Bezos is the Founder, Chairman, and CEO of Amazon.com, one of the world’s largest companies, and the largest online retailer. In addition to being the tech entrepreneur behind Amazon, Bezos is also an investor, philanthropist, and owner of Blue Origin space technology company.