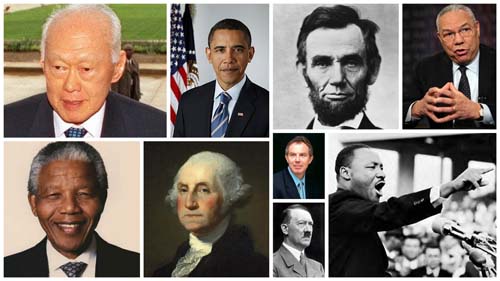 Politicians often call themselves ‘leaders’, but how many can actually be called great leaders? While the political arena is often considered a dirty game where participants fight for power, influence and money, there have been political leaders who have left a lasting impact on our world. In this section, we look at some politicians who have influenced and changed nations through their leadership.

In each political leadership profile, you will find:

Nelson Mandela was the first Black President of South Africa and was an instrumental figure in ending apartheid. After his term as president, Mandela went on to become an advocate for a variety of social and human rights organizations.

Martin Luther King Junior was an American Baptist preacher, activist and prominent leader in the American Civil Rights Movement.  Today, he is identified as an icon of human rights, and his famous “I Have a Dream” speech is still much admired and quoted.

Lee Kuan Yew was the first and longest serving Prime Minister of Singapore. It was his leadership that transformed Singapore from a third world country into a thriving metropolitan city in a stunning three decades.

Adolf Hitler was the leader of Nazi Germany. He is known for his role in the rise of fascism in Europe, World War II and The Holocaust.

Tony Blair served as the Prime Minister of the United Kingdom from 2 May 1997 to 27 June 2007. Since leaving politics in 2007, he has become a sought after corporate speaker with his in-depth analysis and approach to the macroeconomic environment.